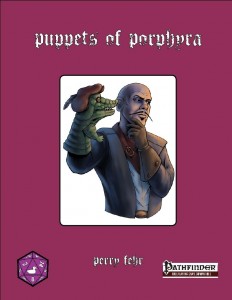 No, I’m not stumped that I’m reviewing a supplement on puppets. I’ve reviewed a base-class of this theme in the past. So let’s take a look at the beginning – the pdf starts with a definition of puppetry as a sub-category of Perform, which fittingly also covers using the shadow puppeteer wayang bard archetype and the interaction with this one’s class abilities.

Next up would be the new 10-level puppeteer PrC. Said class receives 3/4 BAB-progression, d8, 6+Int skills per level and 1/2 ref-and will-save progression as well as 7/10 spellcasting-progression. The PrC does not receive any proficiencies, but it does add its level to the duration of any enchantment spells cast – which is interesting, seeing how long some enchantments last in the first place; we’re talking about hours and days. So, where things become interesting would be with the modification of summon monster – the spell conjures forth an elemental spirit to animate a previously constructed puppet. Now if animated objects seem tougher than regular summons, that would be true -and is balanced via costs to create the bodies to be inhabited by the spirits.

The PrC thus can be considered an enchantment/minion-specialist who also receives craft construct and a powerful capstone that allows his puppets to defeat even fearsome foes, bypassing DR and increasing the threat-range. Next up would be the new magic items – and oh boy, are they delightfully bonkers!

While the first one is pretty conservative, being a beguiling gift spell-in-a-can, it also provides for a discount when shopping. Now concept-wise, the puppets are a DELIGHT. I mean it – they are awesome – from synergy with bardic performances to thoroughly unique abilities, these puppets can be considered inspired in all the right ways – I’ve been smiling like the Cheshire cat while reading these. Then, I began analyzing and the sighing began. What do I mean by this? Take the “Giant’s Fearsome Duo:” When donning these odd puppets (What action? One for each of the two puppets?) 1/day, the user is affected by enlarge person. Furthermore, the following happens: “The mawgriff-head becomes a fearsome beast’s head attached to the user’s arm, gaining reach and allowing a bite attack with a +7 attack bonus, doing 1d8+5 damage, attacking once per round. Out of combat, the mawgriff-head grants the user the scent ability, used with a +9 Perception score.”

So, does the head replace the arm? If so, does the attack count as primary or secondary? What happens to objects held in the hand affected? If not, is it autonomous? If so, can the user deliver touch spells via the mawgriff head and respective class abilities? Is the +7 attack bonus autonomous from the user? Can the user determine which target the head attacks? If the head grants the scent ability, why does it have a fixed Perception check listed? The user would modify usually his/her/its own Perception skill by adding scent… Now to give you an inkling of my pain here, remember that this is HALF of the magic item. And yes, there are more solid examples herein, but I just sat in front of my screen with a frowny face and thought “Why?” I honestly don’t get how such awesome visuals and concepts can be hampered by such a lackluster execution. And yes, mentions of bardic “distraction checks” – which do not exist, btw., can also be found.

The bard can make performance checks to use the Distraction ability, but there is no such thing as a distraction check. At the same time, capability is not the issue – we have e.g. means of using Punch and Judy dolls to use rounds of bardic performance to deliver attacks at close range versus targets as though they were flat-footed – talk about imaginative crunch and cool imagery! Cursed puppets that try to murder their owners are also interesting, though I do not get how they can automatically deal damage when they obviously ought to attack the wielder. We also receive a new artifact and 4 cool construction point-options for animated objects alongside 3 flaws for further customization options. Manipulating unconscious, paralyzed or sleeping humanoids or creating an unhittable vermin make for rather cool (and potentially hilariously annoying!) spells. We also receive 4 sample puppets (including variants!) as well as a sample character utilizing the PrC.

Editing and formatting are okay- in some instances, I do think that the minor glitches can render the rules syntax more opaque than it ought to be. Layout adheres to a printer-friendly two-column full-color standard and the pdf comes fully bookmarked for your convenience. The pdf sports some gorgeous full-color artworks – kudos!

Author Perry Fehr has a distinct style I absolutely ADORE – his prose and ideas are ridiculously awesome and fun and this pdf, being bonkers, allows him to perfectly use his talents to the full extent. I love this pdf, I really, really do – why? Because its crunch-decisions are brave and innovative – there is no single item I’d consider boring – even when the puppets provide a spell-in-a-can, they also have additional, unique benefits, often of a refreshingly unique, glorious bent.

So, as a person, I did adore this pdf, I really loved it.

As a reviewer, though, I ought to rip this a new one. As much as I want to rate this 5 stars + seal of approval, the rules-language just does not allow for it. While the builds, PrC etc. are pretty solid, there are so many, let’s call them by their name, blunders. This pdf at once showcases that proper rules-language is not beyond the capacities of the author and how superb ideas can be tarnished by an execution that simply is not as concise, as good as it should be.

Now personally, I can easily salvage everything herein and my game is better off for this – as mentioned, I adore just about everything herein. At the same time, I can see this making issues galore for less rules-savvy groups and loathe the at times sloppy execution of concepts that deserve refinement. If you are willing to work with this pdf, then GET it – it is a delightfully bonkers, high-concept book. For you, this very much may be a 5 star + seal of approval file. If you, however, expect water-tight rules-language or shirk away from refining rules to make content work, then steer clear of this. My final verdict, as much as I hate to do it, will clock in at 3 stars since I have to take the issues into account.

You can get this inspired, flawed little pdf here on OBS and here on d20pfsrd.com’ shop!