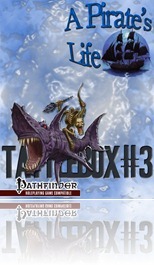 This installment of Tattlebox from Zombie Sky Press is 20 pages long, 1 page front cover, 2 1/2 pages advertisement, 1/2 page SRD, leaving us with 16 1/3 pages of content, so let’s check this out!

This episode of Zombie Sky Press’ Tattlebox-series is completely devoted to the topic of pirates, making it an ideal candidate for insertion into a given Freeport or Skull &Shackles campaign, so let’s check this one out! The pdf kicks off with a short piece of fiction on pirate life, Scott Gable’s “Briny Breath” before we are introduced to John Bennett’s “Shrieking Isle”, a ready to drop in location for your campaign, including gossip to learn about the location, the final resting place of infamous half-orc pirate Regar “Red Axe” Umar, who found his final resting place there. The island’s write-up includes two iconic dangerous haunts as well as a trap ties in well with Christina Stiles’ write up of the Red Axe’s Raiders, a dread organization of dastardly pirates of the very worst kind. Full stats for the weapon mistress of the Red Axes, bloodthirsty Anzajah Kree, is also part of the deal.

Need a way to add a year’s worth of planar adventures or do you have to explain why a PC is absent (layer moving, irl issues etc.)? Check out the insubstantial ghost ship Black Silk, an artefact that takes foes it passes through hostage to carry them away. While it takes survival-skill checks to survive, the permanent benefits of serving on the ship are tangible and significant. And a return from serving on this vessel should be interesting indeed…

John Bennett also has undead aquatic variants for your perusal – useful not only in a campaign like the aforementioned, but also great t see for e.g. settings like Alluria Publishing’s Cerulean Seas. We get variants of the Baykok, a variant of a Giant Crawling Hand, one of the Dullahan, one of the revenant and one Wight – and boy, these variants are neat – they all get at the very least one new signature ability, which is simply awesome! Great work there!

In the “Cracking the Whip”-article, we are introduced to a cool system that provides an easy way for the PCs (and their cohorts) to matter on board of a ship by listing tasks crucial for the functionality of a ship and providing benefits for manning such a post as well as a penalty if the post remains vacant. From the captain to the cabin boy, from boatswain to shanty singer, 11 such rules are provided and deliver nice, solid benefits for making decisions that should help making the decision for roleplaying the crew rather easy. Thomas LeBlanc, author of the former article, also has a nice one on swashbuckling: We get easily usable rules for swinging from rope to rope, attack while swinging and two feats to make swashbuckling attacks easier or use your expertise as a sailor to your advantage while swinging on ropes.

John Pingo’s Pirates and Powder provides us with 2 new archetypes for piratey gunslingers: The Deck Stormer, who uses Cha to determine his grit and can choose two new deeds, one to reduce two-weapon penalties and one to make an additional attack per round after a successful acrobatic check for a point of grit, but no more often than once per round. The second archetype is the cannoneer, for whom bigger is indeed better: A master of two-handed firearms, this one also gets 2 new deeds, one to better intimidate foes and add sonic damage to their deafening attacks. Better yet, they learn to apply their gunslinger powers to siege weapons -Hell yeah, now that’s neat! John Pingo has more up his sleeve, though: An Article on strange hazards of the sea (which is great – we just have not nearly enough good hazards!) that starts with the green flash: Gold for any dark horror-style campaign or simply to add a tinge of potentially cthulhoid horror, this flash from the depth has strange effect on those seeing it, driving them insane in various ways. We also get rules for mysterious St. Elmo’s fire and triangles of terror. Each of the respective entries comes btw. with its own aptly-written introduction from a diary of Bill “Deadlights” Harker.

Thomas LeBlanc delivers the conclusions to this issue of Tattlebox in the guise of two final articles, with the first deserving special mentioning: We get full stats for non-magical torpedoes (alchemical and mechanical), naval mines (2 kinds) and 4 types of depth charges – very cool! If you can’t see the Pcs, in panic, fending off kraken tentacles while trying to bomb it with depth charges or send torpedoes into the maws of sea serpents…well, then I can’t help you. I love this chapter and wished it was longer. Finally, we also get the rules representation for the sailor’s malady scurvy and a devious, magical version of the infamous black spot that may actually slay the one condemned so by a pirate court.

Editing and formatting are top-notch, I didn’t notice any glitches. Layout adheres to a vertical 3-column standard and the original pieces of full colour artwork are nice, especially at this low price. The pdf comes fully bookmarked. The formatting peculiarity in issue #2 that had some tables appear on pages unrelated to their fluff is absent from issue #3 – kudos for listening!

As can be said about most things ZSP have done so far, the crunch in this pirate-themed issue of Tattlebox is solid to say the least – I had no balance-concerns whatsoever and the overall standard is very high indeed. From the new naval weaponry to the haunts, imaginative undead variants and onwards to the hazards – the amount of great content stuffed into these pages is awesome indeed and comes at an excellent bang-for-buck ratio. Thus, I’ll gladly settle for a final verdict of 5 stars – a must-buy for pirate aficionados and a welcome addition to any pirate-themed campaign and even beyond this scope. The cannoneer would make for a cool archetype in military as well, for example…

Tattlebox #3: A Pirate’s Life is available from: