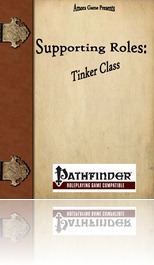 This pdf from Amora Game is the freshman offering of Amora Games and 16 pages long, 1 page front cover, 2 pages editorial, 1 page SRD and 1 page back cover, leaving us with 11 pages of content, so let’s check this out!

The pdf begins with two short narratives. This pdf is the freshman offering of Amora Games and 16 pages long, 1 page front cover, 2 pages editorial, 1 page SRD and 1 page back cover, leaving us with 11 pages of content, so let’s check this out!

The pdf begins with two short narratives displaying different types of tinkers, before we are introduced to the new class, which gets d8 HD, 4+Int skills, proficiency with simple weapons, hammers and picks, light armours and shields and when the emulate spells in light armour, they do not incur a spell failure chance. They get 3/4 BAB as well as good fort-saves and the ability to emulate a limited selection of spells.

Tinkers can cast 1+class level spells from their codex and learn spells like a wizard (and also determine via the wizard-table which spells they can learn), including the governing attribute Int. Design-wise, this limited emulation of spells is an interesting choice, since it essentially gets rid of spell levels in any way but as a requirement when they become available. This can be seen as positive or negative – personally, I consider it a tad bit counter-intuitive – why not let them cast spells the usual way and provide a sample spell-list? Another decision I’m not comfortable with is the fact that the tinker-class can spontaneously choose which spell to emulate, meaning that they have vast flexibility, as they treat all spells the same. Furthermore, the governing attribute of Int usually means that a caster casts spells as a prepared caster, with Cha being the attribute of choice to reflect spontaneous casters. It’s probably not an obligatory rules-convention, but I know that the Tinker going against it will irritate some people, so I felt obliged to mention it.

Being masters of demolition and able to recognize the structural weaknesses of objects, the tinkers get improved sunder as a feat at first level as well as access to edifice recognition, which deals +1d6 damage on sunder attempts and improves every odd level by +1d6 to a maximum of +10d6, making sunder attempts by the tinker truly fearsome to behold. At 2nd level and every 2 levels thereafter, the Tinker may also choose a so-called design, which could be likened to rouge talents. a total of 34 designs are provided and grant the tinker access to e.g. the Disruptive feat without meeting the prerequisites, or to one divine spell from the cleric list to add to the codex. More interesting designs include “Chink in the Armour”, which, after a successful sunder attack against an opponent’s armour, enables a tinker to add the massive edifice recognition bonus to damage on subsequent sunder attempts. This ability sound cool at first and then confused me, as I considered “armours” to be part of the “objects” mentioned in the edifice recognition class feature. So, I guess armours are not objects. Neither are constructs or siege-engines, btw., which have their own design to deal the massive edifice recognition damage to them. 8 of the designs are master-crafter designs that could have been rolled up into one generic design: They all add +4 to spellcraft when crafting an item of the chosen category and diminish the time it takes by 25%. I would have not complained if they did something different from category to category or if there was one design-entry featuring “Choose item-class xyz, you craft this faster and at +4”. As written they are an unnecessary waste of space and ink/toner.

The Tinker may also choose from 3 different capstone abilities, though none of the 3 can be considered worth it when compared to other classes – they are all rather weak, providing the option to add a sound burst to add to an attack 1/day, the option to 1/day sunder an object and destroy it immediately or increase the craftmason’s touch ability to +10. Worse, the entry contradicts what is written in the design-entry: The design entry (and the table) specify that the last regular design is gained at 18th level, while the entry of grand design also mentions that the tinker receives a regular design in addition to the grand one at 20th level.

The pdf also provides additional material in the form of 3 new feats (granting 2 extra emulate spells per day, 2 extra spells for the codex (which is weird, since they can learn spells just like a wizard) and a feat that grants access to an additional design, equalling essentially designs in strength with feats, though supposedly class abilities like that are presumed to be better than feats. The pdf also features a 10-level PrC, the Breaker. The Breaker gets d10, 2+Int skills per level, full BAB-progression and 1/2 fort and ref-saves. The PrC is supposed to reflect a more combat-oriented tinker that excels at smashing opponent’s equipment and e.g. gains access to the “Chink in the Armour” design, the option to charge an enemy without incurring AoOs and a weird ability: Backswing punch lets a breaker attack a foe with a weapon he has weapon focus for. The ability grants you an additional attack at the highest BAB and mentions “If the attack is successful he pushes the target 5 feet directly away from him instead of dealing the extra damage.”

Which additional damage? Weapon Focus does not grant additional damage, or does that refer to the additional attack? If so, the wording is confusing. Furthermore, the ability has a logic bug: The enemy cannot be pushed off ledges, cliffs etc. via it, as the foe has to be still standing at the end of the enforced movement. Why not simply use the established reposition-combat manoeuvre and grant bonuses to it instead of this convoluted ability? Speaking of wording: “At 6th level, on a failed attack of opportunity against the breaker, he may sacrifice his attack of opportunity and 5 foot move for the next round to make a 5 foot move and a retaliation sunder attack.”[sic!] That’s an ability. Straight from the text of the PrC. I get what this ability is supposed to do, but I’m honestly not sure HOW it works. If the breaker foregoes the AoO, does he get 2 five foot moves next round and an AoO at full BAB as a free action? Or is it only one 5-foot step? Only What if the opponent that provoked the AoO is out of reach? Does the attack count against the tinker’s AoO-array for the round in which the opponent threatened the AoO or in the round in which he makes the attack? I don’t know!

This ability is unusable as written. The PrC also grants access to two feats that would have been available sooner – namely dazing assault at 10th level and Stunning Assault at 9th level. I think it should be the other way round, since stunning assault has higher prerequisites and a breaker would fulfil the requirements of Str 13, BAB +11 and power attack – especially since the feat is a part of the ENTRY-REQUIREMENTS of the PrC. The other capstone lets you divide the damage between an enemy and an object when sundering, essentially ALWAYS dealing the full edifice recognition bonus in their attacks, which feels rather powerful.

Editing and formatting are not up to the standards I’ve come to expect from 3pps for Pathfinder: From e.g. an instance of a superfluous “the” to plural errors à la “crafting an alchemical components”[sic!] and punctuation errors, we have all the signs of sloppy editing that detract from the enjoyment of a pdf. Worse, the awkward phrasings often make understanding the respective abilities harder than they ought to be. Layout per se is nice to look at and comes in a 2-column standard that includes full-color as well as b/w-stock art. The lack of bookmarks is another detrimental factor for this pdf, as it makes navigation harder than it ought to be.

Oh boy. First of all, let me say that I was really looking forward to see a fantasy crafting/demolitions-expert as a base-class. I am, after all, a huge fan of the “Malazan Book of the Fallen”-saga and the saboteurs therein are simply awesome. There are problems with sundering, though: Of all the different manoeuvres, sundering is perhaps one of the least popular ones, since it decreases the party’s loot. I was looking forward to seeing how the crafting aspect of the class would serve to counteract the loss of potential items and well, with regards to the crafting components, I don’t have that much to complain about, apart from the obvious bloating of designs via cut-copy-paste design-entries. Designs…I don’t like how the class can take feats to get more of them. There is a contradiction between two entries. And honestly, many just didn’t feel compelling or rather yawn-worthy, granting access to feats or paltry bonuses to skills instead of providing unique mechanical benefits.

Then again, the unique benefits the class has need a serious revision: From the rather strange codex and its strange attribute-choice to aforementioned debacles in the PrC, it is obvious that a rules-guru should have taken another long look at the pdf and then send it back to development. What I also honestly don’t get is why this class in no way utilizes the bomb class features of the alchemist – it seems like a match made in heaven and could enables one to play true sappers. The lack of clarification of what constitutes an object in the signature ability of the class can be considered an inexcusable design-blunder. Add to that the lack of bookmarks, the obviously flawed PrC and the uninspired feats and I have to unfortunately come to the conclusion that this pdf, as presented, has nothing beyond the base-concept of the base class going for it. And then there’s one massive problem: There are already crafting classes out there, prime of which would be LPJr Design’s Machinesmith, which is not only the cooler class and comes with a mechanical servitor, unique inventions etc., it also provides more and superior content at about the same price range. I tend to be more lenient with freshman offerings than with established publishers, but this pdf unfortunately, at least for me, has nothing going for it – it lacks professionalism in editing, disambiguate in the rules and needs another revision to work properly and fix the base-class, feats and PrC and probably add more compelling designs.

As much as I hate to do it, since it really like the underlying premise of the class, I am left with me option but to come to a final verdict of 1 star and a recommendation to stay away until a revision is made.