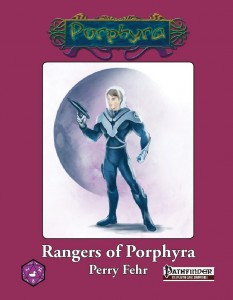 After a brief introduction (sporting a LotR-quote), we dive into the first archetype, which is pretty much a simple archetype for mounted-themed halflings that gets rid of the size penalties to CMB/CMD as well as favored enemy bonuses versus additional subtypes of humanoids – pretty solid.

The Greenrunner can influence the attitude of plants and are locked into certain terrain types – they also need to get a plant companion. Again, a simple, yet flavorful option. Moon-Rangers would be rangers with a more esoteric bent – using a combination of their increased Sense Motive and spells, they may see past magically disguised alignments in a way that scales appropriately with the skill of the opposing creature. Nice! In lieu of Endurance, they get orisons based on Wis from the cleric-list and they also get access to ranger spells at the usual reduced level -3 instead of ranger spells. The class also offers an interesting mechanic, which allows for the increase of CL by 1 for wis-mod rounds – of either the ranger or his allies.

Only issue: The range of “allies” is not specified. Do they need to have line of sight? Line of effect? How many allies? They can also set up ambushes via Stealth – these grant allies and themselves a bonus to atk, saving throws and Stealth checks, with the bonus granted depending upon the check’s result. Problem: Can the ranger take 10 or 20? How many allies can benefit from one such plan? Granted, neither ambiguities break the game, but they are annoying glitches that could have easily been avoided.

The Purple Sage Rider begins play with a free mount and upgrades that to mount at 4th level. Instead of favored enemies, the rider receives a scaling bonus to an assortment of skills that pertain infidels, i.e. followers of a certain deity. Beyond these, amateur gunslinging and abilities that interact with the unique porphyrite borders of Porphyra make for cool options. (In other settings, I’d suggest substituting either magical borders like the mists of Ravenloft or terrain borders).

Now Iron Gods-fans and people enjoying the technology-guide may enjoy the less than subtle Space Ranger! – quoting excessively early scifi, they get unarmed combat, firearm proficiency and a ranged combat style. More importantly, he begins play with an HEV suit with vacuum protection and flying capability as well as an utility belt that has significant carrying options and sports a bunch of items from the get-go. The suit has a laser pistol and a drive that can drain the ranger’s constitution to refill a battery on a 1:2-basis. The suit also sports an augury and some detect-capability. This eats not only spells, starting equipment and wild empathy, but also woodland stride. The first terrain choice would be vacuum (normally not on the list), with higher levels upgrading the suit. I enjoy this archetype more than I expected, though I think that feats like technologist etc. could have been used to further emphasize the unique take of this archetype. Beyond that, I’m not sold on unassisted flying at 1st level – some limit that scales up to proper flying would be imho cooler and less problematic for some campaigns, perhaps with the 12th level upgrade increasing that to jetpack levels. The suit could also have used a better dispersal of abilities among the levels – as provided, it still makes the archetype too good for low-level dipping in my book – and indeed, with spells etc. gone, that’s the most efficient way of sing this one.

The pdf also provides arm-cannons and double-barreled arm cannons as well as melee sap-drainers. 3 sample plant companions as well as info for interaction with the Xesa-race are provided. The pdf sports two new feats – one that prevents you from being considered helpless while sleeping, bound or unconscious, with the odd sentence: “Rogues cannot sneak attack against you when you are helpless, unless they could otherwise do so.” I literally have no idea what this means or how this component of the feat works.

The second feat is just as confused: “As a standard action, you can parry melee attacks with a bow or crossbow, granting the benefits of fighting defensively while drawing a melee weapon, and still receiving a move action. You bow does 1d4 points of bludgeoning damage.”

This makes no sense and shows that the author does not understand how fighting defensively works. First: Fighting defensively =/= Total Defense. Fighting defensively is executed _as part_ of a standard action or as part of a full-attack action, thus doing exactly nothing to diminish the move action a character has or doesn’t have. Dropping a weapon is a free action. Sheathing a weapon is move action. Drawing a weapon, if combined with a move and executed by a character with a BAB of +1 or higher, is a free action. Furthermore, the feat should not lock the bow to arbitrary damage, but specify that using it as a melee weapon deals this amount of damage. These two feats are sloppy and unbecoming of the content provided so far.

On the plus-side, the 3 magic items are solid and nice – herb-pouch with charges that requires some healing knowledge, terrain-coded stones and reforged blades – okay. The spells herein are a mixed bag – a variant of cure for plants only, one that increases “The former effect increases the herbal potency of a plant, so that a Craft (alchemy) check to use the plant’s properties will be increased by 1 per casting.” So one could stack that up? If so: Broken. If not…huh? Herbal potency? Wut iz zis? Please specify! A risky calling of undead to answer questions is pretty cool, but probably won’t see much use at tables. Calling an alignment-dependent companion for one task is nice and a plant-themed aspect is okay.

Editing and formatting are solid on a formal level. On the rules-language level, they are just as varied in quality as almost always with Perry Fehr’s crunch-centric offerings – partially great, partially horrible. Layout adheres to Purple Duck Games printer-friendly two-column standard and the pdf comes fully bookmarked for your convenience and sports the cool color-artwork.

This is frustrating to say the least. I really, really want to recommend this pdf is a more glowing light – the concepts for the rangers are solid and cool and technology-guide synergy is pretty cool as well. The archetypes once again show that author Perry Fehr can execute proper concepts and complex crunch. And then, sloppiness sets in – the two feats are glaring wrecks – how they got past any editing, I don’t know. The spells and other supplemental content ranges in quality from okay to nice and the incorrect HD are another hiccup.

This installment could have easily been 4.5 stars, perhaps even a close 5, but the rough edges and partially glaring glitches, drag this down to a point where I can’t rate it as high as I’d like to. While I still consider this pdf worth the very low price-point (if my complaints above did not annoy you, go for it!), I can’t rate this pdf higher than 3 stars.