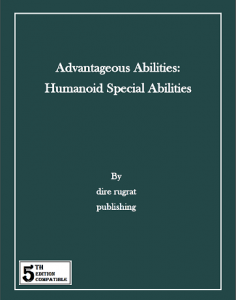 This pdf clocks in at 6 pages, 1 page front cover, 1 page editorial/foreword, 1 page advertisement, 1 page SRD, 1 page back cover, leaving us with 1 page of content, so let’s take a look!

Dire Rugrat Publishing’s 5e-conversions are a joy to behold in that they add unique abilities to the respective NPCs. A total of 14 such abilities are included herein for your convenience. Barroom Brawler lets you ignore difficult terrain generated by bars. Below the Belt nets advantage on attacks versus foes that suffer from a variety of negative conditions…and it is here things get a bit weird – you see, the ability explicitly works for incapacitated, restrained and stunned targets…and those conditions already net advantage. Beyond that, even the argument of just listing the conditions for convenience’s sake is moot, since paralyzed and petrified are missing…so yeah. Wonky.

Close-quarters melee shooting is very strong, allowing for shots in melee-range sans disadvantage. Using verbal jabs to dishearten foes is nice…but oddly, the save does not scale and remains fixed at DC 13 – no proficiency bonus scaling, no Charisma mod, nothing. Yes, I know that monsters adhere to this formula…but we’re talking about general plug-and-play NPC-abilities here! Same DCs for vampire queens and hunchbacks? Weird… Rerolling 1s with fire damage is a cool idea and delivering spells through nearby familiars should help in particular with some conversion issues GMs may encounter….but why doesn’t that work for eldritch invocations as well? They are technically not spells and thus RAW can’t be delivered, when they probably should offer synergy. Motivating minions, the drawback of a peg-leg…nice.

Not so nice: The poisoner ability, which nets an infinite amount of weak poison the character can add to weapons. Weak, yes…but still. Infinite. Speedy reload as bonus action and chandelier swinging are cool. The pdf also features two reactions, both particularly suitable for BBEGs – swapping places with minions to let them take the hit and a reflexive teleport both make sense. The pdf offers nice designer’s commentary on a couple of these abilities.

Editing and formatting are very good, I noticed no formal glitches that would gall me. Rules language is a different matter. Layout adheres to a printer-friendly two-column b/w-standard and the pdf has no artwork or bookmarks, but needs none at this length.

Kelly & Ken Pawlik’s collection of advantageous abilities for 5e-NPCs is interesting in concept, if flawed in execution. While I would have loved some notes on use for players, it is pretty evident from the get-go that the majority of these should not get into player-hands: They work well as special abilities and guidelines, but aren’t that carefully balanced. Generally, this is a pity, considering the fact that drawbacks and boons would allow for an easy point-based customization: Nasty drawback? -1 (-2 for a class that will encounter it often, +0 for a class that isn’t really hampered by it). Solid boon? +1. The framework isn’t hard to set up and would add a whole different dimension to the pdf.

Challenge-adjustments for using these cannot be found, should you be looking for that. The abilities generally make sense and add color and flavor to the NPCs, but some of them are lacking in precision and could use some clearer boundaries/definitions. This isn’t that important when used only to supplement a given NPC, but as soon as you make the abilities the main meat of the offering, you’ll be looking at an issue. Basically, by divorcing the abilities from their context, NPCs and situations you need to offer significantly more precision than this pdf offers. The oversight of not properly distinguishing between passive abilities and those requiring an action is a huge issue that pretty much sinks this pdf for me – we need to know whether and how these abilities work in combat, get concise refresh-info and potentially ranges, if applicable.

Similarly, if you’re looking for abilities specifically designed for orcs, goblins, gnolls – the races one most commonly associates with “humanoids”, you won’t find those in here. The pdf technically is correct, since the abilities apply to characters, but the emphasis here is humanoid, not the implicitly implied savage humanoid most of us associate with the term in a roleplaying context. That being said, this particular gripe will not influence the final verdict, but is still something to be aware of.

So yeah, while I do like some of the options and still consider them extremely flavorful and while the pdf is inexpensive indeed, the brevity does also make the flaws weigh harder upon this than usual. The lack of context for these greatly diminishes their value and makes their issues pertaining opacity, somewhat alleviated by context, stand out like a green hat with an orange bill. While the passive abilities work well, the NPC flavor-tricks were not translated well into the hard, cold world of crunchy abilities in this pdf. I can’t go higher than 2.5 stars, rounded down.

You can get these inexpensive NPC-tricks here on OBS!
Endzeitgeist out.