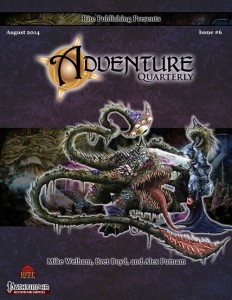 The sixth installment of Rite Publishing’s spiritual heir of the Dungeon magazine clocks in at 72 pages, 1 page front cover, 1 page editorial, 1 page ToC, 1 page SRD, 1 page back cover, leaving us with no less than a massive 67 pages of content – quite a huge array, so let’s take a look!

As always, we begin the issue with a nice editorial by Robert N. Emerson before jumping into the meat of the respective modules. This being a review of an adventure-based magazine, the following contains SPOILERS. Potential players should jump to the conclusion.

All right, still here? Great! The first module herein takes us back into the iconic training ground/artificial dungeon of Questhaven’s Questor’s Society, the Ruins Perilous, wherein 4th level PCs are challenged by Mike Welham to enter the Fungarium! What once was a gigantic banquet hall has since the various cataclysms befell the ruins turned into a kind of interesting fungal habitation, one that is by now separated in two factions of fungoid life-forms that exist in a brokered, uneasy truce – and yes, this means that the best option indeed boils down to actually negotiating with the strange fungoid creatures. If Diplomacy is not up to your PC’s alley, fighting does remain an option, though they will miss out on a boon for the PCs. However, this is not where this dungeon-level shines alone – indeed, the creepy atmosphere is well-supplemented by a diverse array of cool hazards and yes, these strange mushrooms add a nice dimension to the encounters. Fungal forlarren queens that share a mind may be there for negotiation, but unaligned fungoid creatures and a dangerous spiny otyugh do make for quite a few nice, challenging foes for combat-centric PCs to defeat, rounding out one of the arguably coolest levels in the ruins yet – fun, diverse and consistent – I love it! This gets even more awesome by supplementing tidbits like stats for the trap-resetting ratfolk workers, an anti-fungus weapon and stats for groundkeepers et al.

The second module, Bret Boyd’s Fire and Ice, not related to the neofolk band of the same name, begins with the death of adventurers, though thankfully not the PCs – instead, a company of competing adventurers has been all but wiped out while trying to thwart an evil organization’s plan to harvest divine essences. Their sole survivor, as it happens, is on the same ship as the PCs – and draws the ire of the primary antagonist, the immortal assassin Malkin and an iceberg-vessel – upon temporarily defeating the threat, the poor survivor comes clean and asks the PCs for aid and so they’re off to the island of pleasure, Mibre, a small paradise, where an order of enigmatic monks poses an interesting puzzle (including trouble-shooting advice and means t brute-force it) – for without the help of the monks, the PCs will have a hard time bringing the magical crystal to the plane of fire to sunder it and thwart the plans of the evil cabal. My one gripe here would constitute in the lack of vessel stats for the iceberg ship and the PC’s ship, but on the plus-side, the settlement at least does sport a full settlement statblock.

The final module within these pages, penned by Alex Putnam (and Danielle Doss), would be “In Iron Clad,” wherein 14th level PCs have their business trip to a mercane merchant (and a remote metropolis)rudely interrupted while aboard a massive, dwarven sand-steamer used to traverse the massive, lethal badlands – only to have it be attacked by a massive behemoth – and this is only the first of things to come – deadly divs herald the shape of things to come, as the PCs happen upon the massive artifact, the metal heart. Bringing this to the metropolis, the PCs are tasked to pilot the Iron Knight -and yes, we’re talking about the Saber Rider/power Rangers-style mecha also featured in the glorious Kaiju Codex. Much like its rendition there, the rules provided could be a teeny tiny bit more precise, though they should not overexert the capabilities of most groups – and yes, the task thereafter is to pilot the gigantic mecha to vanquish the corrupted, elemental-themed kaiju-sized creatures. But that is not where the module ends – indeed, the PCs have to brave a legendary, vast tomb to find a magic weapon for the iron knight, the Sword of Ages’ End, and use it to vanquish the legendary corruptor in one massive boss battle of gargantuan proportions – quite literally!

After these modules, Creighton Broadhurst provides an array of complex, multi-round hazards/encounters to drop into your game, some of his best work, btw., while Steven D. Russell continues his advice for wide open sandboxing campaigns, including some handy lists t use at one’s convenience.

Editing and formatting are very good on a formal and rules-level. Layout adheres to Rite Publishing’s 2-column full-color standard with a significant array of gorgeous, original full-color artworks AND there are A LOT of awesome maps in here – if you need any more proof that Tommi Salama is perhaps THE heir to Jonathan Roberts, this one delivers – in diverse styles and color, the maps are ridiculously beautiful. Better yet, the maps also come as high-res jpgs for use with virtual tabletops or the printer AND there are player-friendly high-res versions of the maps as well. The pdf comes fully bookmarked for your convenience.

This is a first in the run of Adventure Quarterly – for the first time, more than module blew me away – and honestly, I really like all 3. Each sports unique locations, nice, compact storylines and deliver, in spades, some absolutely imaginative vistas. Better yet, Alex Putnam’s final module is perhaps the best high-level module in any Adventure Quarterly – high-stakes, unique and supplemented by lavish, copious maps, this module is a stroke of genius and will have your players talking about it for years to come – heck, it may be the perfect transition from regular gaming to making full use of the superb Kaiju Codex and truly high-fantasy gaming! This installment is creative in all the right ways and sports glorious ideas as well as Rite Publishing’s trademark focus on high concepts – even the supplemental material went above and beyond – well worth a final verdict of 5 stars + seal of approval!

You can get these cool modules here on OBS and here on d20pfsrd.com’s shop!

Want the subscription for issues 5 -8 instead? You can get that here on OBS!

Missed issues 1- 4? You can get these here on OBS!