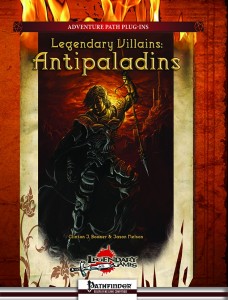 This installment of Legendary Games’ toolkits for villains clocks in at 46, 1 page front cover, 2 pages editorial,1 page ToC, 1 page SRD, 2 pages of advertisement, 1 page back cover, leaving us with 38 pages of content, so let’s take a look, shall we?

We begin this supplement with a short essay on the role of antipaladins as villains and the types of evil they can represent – the essay is pretty much a concise recap of types of evil by virtue of comparison with some icons of popular culture. After this concise introduction to get us into the proper mindset for those champions of evil, we delve into the new archetypes herein.

The first of these would be the Black Knight. Yes. Get all your Monty Python jokes out of your system. I’ll be waiting here…. All right, done? Great! This archetype receives a mount that has an interesting scaling mechanism – at 5th level, the antipaladin can sacrifice his mount to make it return as fiendish boon with an appropriate template. The touch of corruption of the black knight not only can heal her mount, it can also grant temporary immunity against cruelty conditions (including suppression thereof). Better charges and more efficiency regarding the killing of animals etc. complement a mounted champion that can stand on par with cavalier et al. regarding efficiency in the saddle.

The second archetype is the Dark Deacon, who surprisingly, does not gain any spells – instead, this one does get Weapon Focus, access to fighter feats as well as the warpriest’s sacred weapon and limited access to warpriest blessings, while complementing this with domain powers. The Falconer of Pazuzu replaces detect good with bird animal companions at full druid progression, but only half hit points – however, they do get the fiendish template. Facloners can scry upon their falcons and do have two unique animal tricks to teach them – nice, since this is an imho underused mechanic! The intriguing archetype also adds plaguebringer to the companions (later also allowing the delivery of touch spells…) and provides nice further synergy with the unique feats in here, but more on that topic later. Smite is also kind of shared and yes, the falconer does receive Hunter’s Bond and a unique high-level trick for birds that delivers devastating charges. Awesome archetype!

The Kohai of blasphemy is a chronicler of atrocities and receives a flexible take regarding the use of mental attributes for the purposes of key attributes for abilities etc. That and improved touch of corruption as well as bonus feats are offset by terrible scars that penalize saves and a slower BAB-progression. After these archetypes, we are introduced to the main meat of the book, a vast array of [Cruel] feats – antipaladin feats specifically designed to provide options beyond what would usually be considered normal – indeed, each of the feats comes with a high-concept fluff-text (though some of these lack the italicization established as a formatting standard) and the feats provide a different array of feats that can be considered a huge toolbox of options to make uncommon class combinations work – full synergy between ninja or monk and antipaladin? Covered. And yes, the feats do sport quite an array of abilities -it is not uncommon for 2 feats herein to cover a whole page, so yes – these feats cover more than some archetypes I have read over the years, including an array of scaling benefits thata re unlocked at a certain level. And yes, much like in the first Legendary Villains-book, it is pretty evident that not all of these should find their way into player-hands.

Let me elaborate on this: Remember the exceedingly iconic dark wood-themed feats in the Legendary Villains: Dark Druids-book? Well, there would be an antipaladin-feat thematically linked to said concept. The feat renders all items the character takes broken for as long as the character touches them, while also rendering Use Magic Device a class skill. Your reduce hardness of the objects you attempt to damage, later crumble objects to rust and you get 1/2 “druid” level as barbarian rages – note that this feat constantly refers to “druid levels” instead of antipaladin or character levels, rendering me somewhat unsure whether that is a case of wrong class name or intentional for multiclassed characters. There also would be feats that practically demand to be used for certain adversaries – Bright-burning Tempter’s follow-up feat “Answer to Apocalyptic Desires”, for example, allows for a broad array SPs to be granted to the supplicants via e.g. wishbound arcana, which also provides additional synergy with the touch of corruption class feature.

So yes, we have a continuation of Dark Druid‘s complex feats that essentially go above and beyond in power-level and breadth of what a feat is usually capable of. The feats herein, one can argue, do more than most of 3.X’s Prestige Classes and provide inherent scaling mechanisms that are enough to make a significant majority of them unlock class-combinations of archetypes that were previously cool in concept, but not particularly feasible from a perspective of efficiency. Antipaladins poaching among the alchemist’s tricks? Yes, in there. Blackblade-magus/antipaladin – synergy-feat? Jup, there. We can also find feats that make use of archetypes and archetype combinations here, allowing for completely now, suddenly efficient villain builds. Are these feats balanced? No, they are not. They quite frankly constitute patches in the increasing complexity of the system to bridge gaps, patches intended to render adversaries and iconic builds work. Now not all feats fall into this type of pattern: For example, you can spontaneously summon a chosen wondrous item to conjure it forth said item temporarily – think of it as an external non-consumable item to call forth, one whose base-price btw. increases.

Unlocking the aforementioned powerful dark druid feats for inquisitors can also be found herein and yes, there are feats particularly suited for the new archetypes herein as well. Touch of corruption dice increase and adding sticking damage on subsequent rounds – yes, this is possible, though oddly the latter feat’s text is gray instead of black – odd formatting hiccup that is mirrored in quite a few feats. Have I mentioned being able to execute warpwaves, protean-style? Particularly awesome would also be the options to add proper antipaladin/time thief-synergy – yes, there are feats herein that work in conjunction with Rogue Genius Games’ Prince of Persia-style classes. Awesome since it adds a further dimension to these feats!

Editing and formatting are good, though not as good as in most Legendary Games products – there are quite a few minor typos and formatting glitches herein. Layout adheres to the full-color two-column standard of Wrath of the Righteous plug-ins and the pdf sports gorgeous full-color artworks, though rampant fans of Legendary Games may recognize some of them from other supplements. The pdf comes fully bookmarked and, thankfully, hyperlinked for your convenience – a necessity when confronted by the complexity of these options.

Jason Nelson and Clinton Boomer’s first cooperation in Legendary Villains: Dark Druids felt a bit disjointed. In this second cooperation, their distinct styles blend better – and distinct they are. Jason Nelson is one of the masters of concise crunch presentation and Clinton Boomer is all about massive, evocative concepts. While I would not let most of the feats herein anywhere near my players, thankfully, they are not intended like that. Instead, the feats herein should be likened more to miniature templates for class/archetype-combos. Essentially, they are concept-enablers and simply inspiring, deadly arrays of abilities that will stupefy your players and put the fear of antipaladins back into them – but not only antipaladins, but many combos that would not be otherwise viable or smart. In the end, this collection is one glorious toolkit for GMs to enhance truly nasty adversaries and make the PCs really, really dread those champions of darkness. While the pdf does sport more rough edges and while some of the feats do sport minor ambiguities, this pdf ultimately constitutes a great toolkit and is well worth of a final verdict of 4.5 stars, rounded up for the purpose of this platform.

You can get this delightfully dastardly collection of options for the champions of darkness here on OBS and here on d20pfsrd.com’s shop!