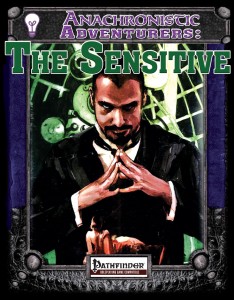 The final installment of the anachronistic adventurers-line is 19 pages long, 2/3 of a page front cover, 1 page editorial/SRD, leaving 17 1/3 pages of content, so let’s take a look!

Rules-wise, the Sensitive gets d8, 7+Int skills, proficiency with simple weapons, good will-saves, 3/4 BAB-progression. Over the course of the 20 levels, they may choose from 6 sensitive talents and from 4 limited talents – these are also sensitive talents, but the selection is more restrictive. At first level, the Sensitive gets the Intuition ability, which allows the class to class-level + wis-mod times per day substitute a intuition check (d20+ class level+wis-mod+3) for the skill-check they’d usually make, making the class potentially quite formidable in the skill-area. The aforementioned talents span a range of 22 different ones that allow a sensitive to have an animal companion, a reverence of an object that translates to favored enemy-style bonuses, gain improved defensive fighting capabilities, may act in surprise rounds, may take 10 in chosen skills even while under duress, add wis-mods to a variety of rolls, have an augury-style gut feeling, gain improved uncanny dodge and better aid another, be a pacifist (which translates to a penalty to lethal attacks, but bonus damage when dealing non-lethal damage at higher levels), realize when afflicted by negative conditions, spells etc.

Among the more interesting talents, we get trivia for the learned jack-of-all-trades, which allows the sensitive to know obscure and helpful pieces of information, coming with a fitting short table of sample DCs and pieces of information to allow the DM to properly judge the difficulty of information gleaned thusly. My favorite ability, though, would be Body Language: By succeeding at a sense motive check versus 10 + target’s HD + Cha-mod or 10+bluff bonus, the sensitive knows what the respective target will do this action and may use a readied action to preemptively take a standard, move, swift or free action, acting before the target. VERY cool, that one!

As with other Anachronistic Adventurers-pdfs, we also get a selection of anachronistic archetypes that can be applied not only to the sensitive, but to all classes in the line. These are chosen at first level. We get first the Esper, who is particularly adept at using the new psychic powers (more on those later). The second is the Profiler, who may take the measure of his foes, thus gaining bonuses to social interaction. 7 talents provide exclusive additional benefits that include being able to read animals, assess creatures by deeds and not by interacting with them, expertly fool creatures into believing he has strange powers, glean the true desires of those subject to his reading. The archetype unfortunately also features an alternate version to read body language, duplicating detect thoughts – unfortunate because it is called like the same ability of the base sensitive class – different names would have helped keep the abilities apart.
Finally, the Volur archetype gains penalties to BAB, but also access to spells of up to 6th level and may choose a spell-list at first level: Bard, cleric/oracle, inquisitor, druid, magus, sorceror/wizard or witch can be chosen. They cast these spells spontaneously via charisma and depending on the class, their spell-selection is restricted by e.g. not being able to learn hex-modifying spells etc and thankfully also specifies which type of spellcaster the respective Volur counts as.
It should be noted that adapting classes not from the base-rules and using SGG-archetypes is covered as well.
Beyond these, we are introduced to psychic abilities – available to both base class and especially to e.g. espers. Psychic abilities take standard actions unless otherwise noted, provoke AoOs, and when interrupted, require a DC 20 concentration check to properly activate. Characters that otherwise would not have a concentration check use 1d20+HD+wis-mod. Psychic abilities put a strain on the user and each time the user fails a check, he incurs stacking penalties and may fatigue the user. The abilities per se, 7 to be precise are interesting in their mechanics – they are based on respective skills. Distant Viewing requires e.g. a Perception-check and can be used to see far away creatures and objects – with a complex barrier making spying into secluded areas still complex. Dowsing for materials, mesmerizing others, seeing creatures in the ethereal plane or otherwise concealed, a very limited psychokinesis – the options are neat. Gleaning knowledge from objects via psychometry (gold for investigations) deserves special mentioning, in no small part due to the synergy with distant viewing and a limited telepathy is also among the cool powers. The pdf also features a feat to gain access to a psychic ability and provides information on making the supernatural psychic abilities extraordinary to e.g. properly set them apart from psionics.

Conclusion:
Editing and formatting are top-notch, I didn’t notice any significant glitches. Layout adheres to SGG’s 3-column landscape presentation and the b/w-artworks, while stock are very well-fitting. The pdf comes with no bookmarks, which is a detrimental factor for me.
I like the Sensitive and its ideas – the talents are complex and intriguing, the archetypes interesting and well-crafted and especially the psychic powers are smart: Without invalidating psionics, they deliver a more down-to-earth take on extra-sensory perception and abilities that fits very well with not only “gifted” characters, but also could conceivably work well in a modern/post-apocalyptic context or even a CoC-based game. Kudos for not dividing the market and instead doing something that feels mechanically distinct. That being said, this is also perhaps the Anachronistic Adventurers-pdf that feels like it’s slightly less involved than it could have been – essentially, the mechanic foundation of the class is very similar to e.g. the Daredevil, which per se is nothing bad. But e.g. the doubled talent-names hurt it slightly.
Furthermore, I couldn’t help but feel that a slightly tighter focus on the psychic powers, with more of them and a more pronounced access for e.g. Profilers etc. to them might have made this even better.

Now don’t get me wrong – I still very much enjoyed this pdf and consider it a good buy indeed – the psychic powers alone are glorious and can be scavenged to grant interesting abilities to characters. It’s just that this nagging feeling wouldn’t stop, this distinct impression that more interesting talents (like the first body language…) instead of the more straight ones would have made the class more distinct. On the Presentation-side, I also felt that some highlighted base concepts (perhaps in bold print) among the psychic power-rules could have made them slightly easier to comprehend – while complaining at a high-level, I can’t help but feel that e.g. the psychic frequency-topic could have used some further elaboration – in the powers-description it is briefly touched upon as a concept with regards to the psychic powers, but a concise definition of it, whether it can be blocked, modified etc. – is not there. A pity since per se the concept could have imho carried several interesting abilities to find out peculiarities about the missing person x etc. -Especially relevant since the write-up does not specify a degradation of this imprint over time, making it possible to read ancient artifacts, but also hard to hide from – after all, who’d expect something like that?
In the end, I consider this installment both great and slightly below what it could have been – a tighter focus on psychic powers, with perhaps more mundane options for not-necessarily-psychic sensitives like the Profiler, could have improved this further. As it stands, it is still a very good buy, clocking in at 4.5 stars, rounded down due to aforementioned minor issues and the lack of bookmarks to 4 for the purpose of this platform.

Check out the Sensitive here!