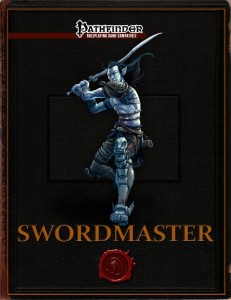 Dex-based combatants have always been popular in style, but it is a fact that in d20, the fencing/duelist/swashbuckling characters often felt a bit off. Dervish Dance might be powerful, but it is limited in both fluff and execution and does not manage to offset the investment when compared to a similar str-based build. The Swordmaster seeks to remedy that by providing a dex-based front-line fighter. Does it succeed?

Mechanically, the class comes with d8, 2+Int skills per level, proficiency with all simple and martial swords and the quarterstaff as well as light armors, but not shields, full BAB, good fort- and ref-saves and two values – the intelligent value and the magic value, with the former beginning at 500 GP at second level and going up to 42K GP and the latter starting at 2000 GP at third level and going up to 200K GP at 20th level. These values are crucial, since swordmasters use a partnered blade. They start play with a masterwork sword of their choosing that gains sentience. While usually in line with the swordmaster, it may up to 3 rounds subvert actions of the swordmaster (and vice versa). Changing partnered blades results in 2 negative levels that cannot be cured (but also don’t kill the swordmaster).  As soon as it becomes intelligent, the blade also gains enhancements to mental attributes whenever its magical “plus X bonus” is enhanced. The blade also gets an ability akin to Rite Publishing’s enhancement of the bladebound archetype, to have the blade devour magic from items it destroys- the second value I mentioned before reflects the blade’s capacity to store this power and translate it into enchantments. Also rather interesting is the fact that the swordmaster may, starting at 5th level, treat all swords as intelligent items (There’s a hidden darkness in this blade…).

If d8 and the minimalist list of proficiencies were not ample clue for you, swordmasters also start the game with two abilities that are designed to keep them viable on the frontlines, both tied to wearing light or no armor and no shields and only a single sword (sorry, no two-weapon fighting). Tactful Deflections allow the swordmaster to add +1 to AC per swordmaster level as a deflection bonus, up to a maximum of his Int-modifier. This bonus does not work when flatfooted or stack with the duelist’s canny defense, though. Tactful strikes allow the swordmaster to use his dex-modifier instead of his str-modifier on attack rolls with swords. Instead, the class may not add their str-modifier to weapon damage, though if they incur a str-penalty, half of that is applied to attack rolls. It’s an interesting choice to not have dex apply to damage as well – at least to regular attacks. Sword Arts deal additional damage equal to dex-mod or in the case of a 2-handed sword, 1 1/2 times dex-mod  and may not apply str-mod/power attack bonuses to their sword arts damage.

The true meat of the swordmaster-class, though, would be his sword arts. At first level, they start with three of these special attacks and every level after that, they learn a new sword art (or advanced sword art starting level 8). Sword Arts require different actions, from none to a full round and some, though not all, require a trigger to be set off and/or a performance on your part, i.e. for example a 5-foot step, an attack with a -2 penalty etc. Many of these sword arts also have a window, that is upon meeting the performance criteria, they have to be used in a specific window of time. Now the sword arts per se are interesting – they are grouped in three different categories:

Openers, Sequiturs and Finishers. Unless otherwise noted, to perform a sequitur, the character must have successfully hit the opponent to be targeted with an opener, and to perform a finisher, he has to follow up on a sequitur. To give you an example, let’s take a look at the initial three sword arts every swordmaster starts with: The opener allows as a move action to feint a creature within reach that can see you. This opens a window for you until the end of your next turn to follow up with a sequitur that is an attack versus the feinted opponent and deals the sword art’s damage (i.e. with the dex-modifier). Succeeding at the sequitur allows the swordmaster to have another window until the end of his next turn and follow up with a finisher as a full-round action that is resolved as an attack that deals double the sword art’s regular damage.  Attentive readers may glean where this is headed – openers are usually weaker than regular attacks, sequiturs are usually on par with them and finishers are more powerful than regular attacks to offset the requirement of setting them up via two attacks.

Design-wise rather interesting, especially due to the fact that the 10 openers provided include ways to get the opener out of the way faster: Opportunist’s Feint, for example, allows the swordmaster to feint a creature hit by an ally that flanks it with the swordmaster as an immediate action. Cunning Swordplay allow you to make an opposed intelligence check versus a foe – if the target attacks you or provokes an AoO from you, you may execute a readied sequitur against the foe before the attack is resolved. Another interesting one is “Press in” – as a reaction to being hit by a creature within 10 foot, you may opt to make the hit a critical hit against you to move 5 foot towards the target. It also counts as a opener as a free action, allowing you to perform a sequitur versus the enemy. Also interesting: If you manage to use move actions for 2 rounds to talk with a foe and bait a foe, you may on the third round execute an immediate sequitur, while still allowing you to perform other sword arts while talking to the foe. Also interesting: “Whirling Defense“, while not stacking with combat expertise or total defense, allows you to use a standard action to gain +4 deflection bonuses to AC and an additional +4 AC against the creature that missed you. Have I mentioned the option to throw swords?

Among the 10 sequiturs, we have the option to move half your speed through threatened squares of a target  with a bonus of 1/2 class level to acrobatics, allowing for quick repositioning that does not provoke AoOs. Measured Strike also features an interesting tactical choice – attack foes at +2 and increase the critical modifier by +1, but only inflict half sword art damage. Another sequitur allows you to react to killing a creature to make 3 5-foot steps toward another opponent. Shallow Cut is yet another intriguing sequitur – upon a successful hit, the target may opt to take a 5-foot step to avoid the damage, but if he/she/it does so, you gain +4 to atk and AC against the target until the end of your next turn. A thus dodged attack can still counts as successful, meaning it can be followed up by finishers…

10 finishers are provided and allow e.g. to do an attack that deals half sword art damage as a free action,  add half class level bleed damage to your hits and if you manage to drop 10 feet on your target (Up the walls-psionic warriors will love this) ad incur an AoO from all except the target, you may deal triple damage, but also become staggered for one round. Other finishers allow you to make a bull rushing finisher that doubles as a sequitur for yet another finisher. There are also full attack-based finishers that allow the swordmaster to stack +2 damage bonuses, CMD & CMB, AC and initiative-increase, with the latter potentially allowing you to act twice, by coming in at the bottom of the initiative-ladder.

Among the advanced sword arts, we get 11 openers, 11 sequiturs and 11 finishers – and they are interesting and advanced for a reason. The arcing draw opener for example allows the character in question to draw the partnered blade from a sheathed position to make an attack roll and apply the results to up to 3 creatures, then make a 5-foot step. And just as I get ready to yell “unbalanced”, I read that the opener only does half damage. Also damn cool: The opener deathless resolve lets you stand up and arm yourself with a slashing/piercing object in range, allowing you to ignore the disabled, unconscious and even DEAD conditions until you fail to hit and deal damage to the target. Again – the potential for abuse is offset via clever balancing – during this time, you cannot regain hitpoints! Have I mentioned the option to impale foes with a sequitur (potentially abducting them via shadow walk etc.) and allowing them to inflict con-damage to themselves to break free from the impaling? Where I’m honestly not 100% comfortable is with Keen Strike – the sequitur must follow a critical threat or hit and  increases your weapon’s threat-range by your int-mod. This is slightly too much for my conservative tastes when combined with wide threat-range builds, at least for a sequitur. The more powerful advanced finisher Dance of Storms feels more appropriate for this benefit – it grants the same crit-range enhancement as well as the bonuses from the non-advanced Dance-finishers, provided you have them.

The pdf also offers advice on choosing sword arts, has an expansive two-page table of the sword arts and a sample page to show how to organize sword arts.

Editing and formatting are top-notch, I didn’t notice any glitches. Layout adheres to Dreadfox Games’ 2-column standard with its thorn-covered borders and the pdf comes extensively bookmarked. The original full cover artwork and two 2 b/w-line drawings are nice.

This pdf is not a cheap supplement for a new class, but the Dreadfoxes have learned – we get more content than in e.g. the Gypsy and Ritualist-supplements – though comparatively still not that much. I didn’t expect to like this class – I bought the Tome of 9 Swords back in the day and loved the idea, but hated the execution. The Swordmaster is not as mystical, being in fact rather down to earth and potentially fitting for low-magic settings (just get rid of the blade’s intelligence) and honestly impressed me: The building on attacks, the sequence of openers, sequiturs and finishers should make the swordmaster not only immensely fun to play, it also brings added tactics to melee you wouldn’t expect, making it closer to how actual sword fighting works – and I happen to have some experience in that regard, so kudos indeed!

Better yet, the sword arts lend themselves to further expansions that should make adding more to the fray to represent different schools easy. I could e.g. see more magical schools as their very own book beyond the upcoming supplement for this class and the puppetmaster. And then there’s the fact that only one of the numerous arts rubs me the wrong way, meaning that I actually not only consider this class a rewarding and intriguing gaming experience, but in fact also consider it balanced. This is, hands down, my favorite Dreadfox Games-product so far, offering a long overdue, smart and complex melee class that should fit the tastes of many players out there. My final verdict will reflect that I consider this class not only smart, but in fact brilliant and clock in at a well-deserved 5 stars + seal of approval.

Check out this master of blades here!