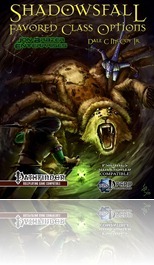 This pdf from Jon Brazer Enterprises is 12 pages long, 1 page front cover, 1 page editorial/ToC, 1 page SRD and 1 page back cover, leaving 8 pages of content, so let’s check this out!

It’s been some time since Jon Brazer Enterprises released the excellent bestiary for the upcoming Shadowsfall-subsetting, which details the Shadow Plane. This now is the very first supplement to provide new information for Shadowsfall in the guise of favoured class options. As a reviewer, I hate those. Seriously. A lot of tightly crammed information, a lot of potential for balance-concerns to slip by and not too exciting to read.

However, there actually are some points that made this pdf stand out for me: First would be that the Shadowsfall-setting assumes unusual PC-races to be rather common: The races covered in the pages of this pdf include the Dhampir, drow, duergar, fetchling, hobgoblin, orc, ratfolk, tiefling, umbral kobold, wayang and wanderers. That’s at least some nice derivation from the standard. The second one I personally absolutely love is that this pdf shows some major love for other 3pps: Each of the races comes with favoured class options for some of the best 3pp-classes out there:

Super Genius Games’ critically acclaimed and much lauded Time Thief and Time Warden are covered alongside TPK Games’ no less celebrated Malefactor-class. If you haven’t checked any of these out, do yourself a favour and do so now: They are plain awesome. Even better, fans of psionics are also covered by this pdf: Psions, Psychic Warriors, Wilders and Soulknives, i.e. all the base-classes from Dreamscarred Press’ semi-official excellent Psionics Unleashed also get favoured class options. Suffice to say that Gunslinger, Magus and all APG-classes also are part of the deal. The variant classes Samurai and Ninja are absent, though, but seeing that each of the races covers ALL of the classes with favoured class options, I figure that’s ok.

Among the favoured class options, we get the usual range of e.g. + 1/4 damage to unarmed strikes for monks, but also some creative deviations from what one would expect: Multiple races can for example add +10 minutes to the duration of alchemist’s mutagens, a dodge-bonus for Malefactors when performing harrowing strikes etc., +1/6 of a d4 when using motes of time to boost a damage roll etc.. Drow soulknives may, by choosing 5 times the benefit, increase a soulknives’ range by 5 foot (4 foot, 3 foot etc. is treated as no increase). Duergar bards also get a rather interesting one: Reduce arcane spell failure by 1% – seems boring, but as soon as you reach 10%, though, you also gain medium armour proficiency, awarding sticking to one favoured class option over ten levels with a feat – nice idea. Duergar Oracles can gain Martial or Exotic Weapon Proficiency this way, each level reducing the penalty by one. I quite a fan of this approach to favoured classes, since it simulates continuous training by the characters. Fetchlings cavaliers may impart a growing darkvision to their mounts.

I’m not sold on all options, though: Hobgoblin Inquisitors may e.g. gain a bonus of +1 to concentration checks to cast Inquisitor spells each time they select the ability and there’s e.g. also an instance of a Time Warden getting such benefits – I think this ability needs to cap somewhere or be + 1/2. Another problem I found was that races like orcs and duergar can now choose for their barbarian to gain an additional round of rage per level – that’s 1/6 of a VERY useful feat that become immediately available without the usual waiting over class-levels. Tieflings adding +1 spell known to the Time Warden’s list of known spells – and the class is a spontaneous caster. That means the restriction of the spell-selection is a basic principle of balancing the class and undermining that by dumping spells on him, even if they have to be one level lower than the maximum he can cast. Wayang oracles even can add wizard-spells to their spell-selection in similar ways, though only those of the Illusion-school and one level lower than their maximum spell level they can cast. Here, wording is problematic, stating “The spell is treated as being one level higher, unless it is also on the oracle spell-list.” Does this increase of the spell’s level effect its DC? Is the increase applied before or after checking whether the spell is legible to be granted via this class option? Depending on the answer, the spell chosen would then actually have to be two levels below what an oracle can actually cast…

Editing and formatting are good, though not perfect: I noticed a minor glitch here and there as well as some wordings in need of clarification. Layout adheres to a full-colour, used parchment look in 2-columns, is easy to read and comes with nice full-colour artworks. The cover artwork is brilliant, but you see that yourself. The pdf also comes with a printer-friendly version that retains the full-colour artworks, but omits the parchment-like background – nice. Both versions of the pdf come with extensive nested bookmarks.

Favoured class options, ironically, go hand in hand with traits in being my least favourite pieces of content to review. Their bonuses small, both additions to the Pathfinder ruleset have in common that they need something to make them more than a neglectable, often overlooked possibility to maximize characters. With recent innovative takes on traits like in Rite Publishing’s “101 Pirate & Privateer Traits” and Dias Ex Machina’s excellent take on traits in their acclaimed “Amethyst Renaissance”-setting, the bar has been raised regarding them. This humble little pdf is a step in the right direction for favoured class options in two ways:

The first being that the favoured class options feel more distinctly tied to the respective races – Drow barbarians e.g. improving the guarded stance rage power etc. The tying of these benefits to general fluff of the races is nice, though I would have liked the synergy to go further, perhaps tying in more with racial abilities.

The second would be the synergy with the great 3pp-classes herein: Not only is the psionics-love awesome, the inclusion of the Time-classes and the Malefactor is the latest in a cool trend of 3pp-synergy pioneered by Rite Publishing’s ties with SGG, Raging Swan and Adventureaweek.com contributing to Pathways etc. Whether it’s LPJr Design’s Section Omega, Ron Lundeen of Run Amok Games penning Dark Waters rising for Raging Swan Press or TPK Games supporting SGG’s Death Knight – this synergy helps not only fellow publishers gain additional exposure, it also leads to an increased longevity and viability of the classes put out – especially when the new content for the classes is mostly as well-crafted as herein.

All in all, I’ve mentioned that I’m probably not the best guy to review a pdf of favoured class options. That being said, we get extensive hyperlinks to d20pfsrd (though I e.g. noticed an instance of “eidolon” not being hyperlinked, when in the subsequent sentence it was), which is awesome. However, on a personal preference, I would have loved the links to be indicated in some way, perhaps by underlining them – I’ve clicked on some of the hyperlinked words by accident and got the “connection to web”-prompt. This, combines with the minor balance-concerns I have as well as the nature of these favoured class options mean that I can’t go as high as I would have liked to with r
egards to my rating. If you’re into the idea of favoured class options, this book may very well be what you’re looking for and it is actually a large step into the direction I’d love to see favoured class options take in the future. For now, though, I’ll remain with a final verdict of 3.5 stars, rounded down to 3 for the purpose of this platform.