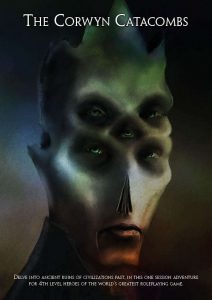 The freshman offering by Magnificent Creations clocks in at 18 pages, 1 page front cover, 1 page editorial, 1 page SRD, leaving us with 15 pages of content, so let’s take a look!

This review was moved up in my reviewing queue due to me receiving a print copy of the adventure; the print copy is saddle-stitched, uses matter paper for the cover and thick, glossy paper inside, and generally feels professional in its presentation. I have also consulted the pdf-version for this review. This review pertains to the revised edition 1.02 – if in doubt which evrsion you have, if you have two handouts as jpgs, you’ll have the correct iteration.

Okay, so the module is nominally set on the continent of Tyllia – a part of the continent’s map is included in the appendix, including a table that lists the respective deities, their alignment, symbol and domains; species like dragonborn etc. are also contextualized, noting the most likely geographical origin, as well as “Your character might be from…” The implied setting has a couple of interesting notions, such as a Witcher-esque “humans are relatively new” angle or the Warhammer-like notion of orcs (called “Aurx” here) being able to subsist on photosynthesis and being pretty civilized. Nothing I haven’t seen before, but a promising step away from the defaults.

Cool: The module does not only adhere to 5e-formatting conventions properly, it also explains them to the reader/GM. Indeed, this does extend to the presentation of the two new monsters herein – apart from a blank space missing consistently between e.g. “60” and “ft.”, a true nitpick, granted. However, the statblocks do sport a couple of peculiarities that bear mentioning: For one, proficiency bonus is explicitly listed, which is not usually something you do; this might be chalked up to the nature of these monsters, though – as we’ll see below, there could be a justification at play here based on narrative, one that explains why they have a higher proficiency bonus than usual for their challenge rating.

Thankfully, the errors that haunted the statblocks have been rectified – saves, spell saves, and skills now check out. I am not 100% happy with an attack being called “chill touch”, when it has a range of 120 ft. That’s a bad ability name, as it sounds like the spell – and I assume that that’s what it’s supposed to be, but I’m not sure. When one looks at the default stats, spells are usually not formatted this way. That being said, it is very much possible to format attack options this way, so assuming indefinite uses, this is correct.

The 4 new magic items included are nice, and include one particular item that grants additional powers when more items of its set are found; the capstone ability for this set is artifact-plus-level strong, and obviously is intended more for story/capstone purposes – while it does not feature in this module, it is nice to have as an idea. The book also features a nice “Wanted!”-poster (no mugshot)-style handout, which is presented as a nice jpg as well in the print version. As hinted at before, there is a diary page that the PCs can find, and this page is now presented as the second handout – nice.

The adventure per se is a pretty straightforward exploration of a linear dungeon, but it does sport more than one theme and has more to offer than just combat. Difficulty-wise, this probably won’t result in TPKs if your players are halfway smart. The module is intended for 4 to 5 4th level characters, and can be completed in one session, as advertized. The map of the complex explored herein is functional, focusing on room-dimensions and not including statues or specific features. There unfortunately is no player-friendly map to copy, cut up, and hand out as the party explores, or for use in Roll20, Fantasy Grounds, etc. That’s a bummer for me, as I do hate drawing maps and REALLY suck at it. Plus, being able to hand out the map just speeds up the game so much. Finally, it should be noted that the adventure does come with read-aloud text, and a big plus would be that NPCs like smiths, bartenders, etc. get sections mentioning their appearance, mannerisms & personality and motivation – kudos there! Information design is also above average, with bullet-pointed lists allowing the GM to precisely and quickly get a grasp on treasure etc.

All right, only GMs around? Great! So, the plot of this adventure is a basic “Timmy fell down the well”-scenario – the party is asked to save the boy Hector on behalf of his cartwright mother, as he is prone to wandering too close to the taboo catacombs. Another party has recently vanished there, and once the party arrives, things seem to be pretty straightforward: The first couple of rooms depict the squalid and impromptu home of a small goblin tribe in exile, including their bugbear chief – here, the revision has added a significant comfort plus, making it easier to parse the number of goblinoids actually present – kudos! While hostile, the goblins may be cowed into providing information – which is another somewhat odd aspect: The module goes to above-average lengths to portray them as more then just foes to slaughter, and in the revised version, there are more ways than Intimidation to make them not resort to violence, which is a good call – kudos for allowing heroes to behave, as, you know, heroes.

Ultimately, the goblins have dug into an old complex, which includes a riddle door: The riddle here deserves special mention, as it feels classic, is clever, and is not based on a pun – that means I could actually translate it into German, French, Norwegian, etc.! Another plus: The riddle’s references make sense within the gaming world’s context. So yeah, kudos there! The module does include means to brute-force the door, if required, just fyi.

The party’s investigation into the complex will yield the remains of former adventurers, as well as things activated by accident – one of the new monsters, the chiran servitor, who is pretty nasty. Ultimately, the party can find Hector, who has one of two mysterious orbs: These act as keys for the final (and completely optional) room, wherein the gorgeous fellow on the cover awaits – that’d be a Chiran, a very powerful progenitor race who escaped a cataclysm via stasis. This master of necromancy essentially is the secret boss of this adventure, and constitutes the second new creature. As noted above, the nature of Chiran and servitor as antediluvian progenitor-race beings might account for the irregular proficiency bonus. The revised edition has made the orb-aspect easier for the GM – they are now properly bolded in the text, making impromptu running of the module much more convenient.

The revised edition of this book has polished its information design, with bolded key items and creatures, to excellent levels; on a rules-language level, the supplement now also lives up to the formal aspect, eliminating my main gripe with the adventure. Layout deserves special mention: The NPC-depiction, the bullet pointed rooms – they really help render the module easy to use, and look professional and well-crafted – kudos! In the revised edition, it is very much possible for an experienced GM to run this module sans preparation, just by skimming text while running the module. The artworks by Izzy Collins are similarly a component of this module that pleasantly surprised me; they are full-color, high-quality pieces, and e.g. the aurx mayor gets their own artwork. Kudos! The pdf version comes fully bookmarked with nested bookmarks, and, as mentioned above, the print version I have received is rather nice indeed – certainly more impressive than many comparable adventures I own. Cartography, as noted, is functional, but not very detailed, and I’d have loved to see a player-friendly map, particularly since interacting with the goblins in a non-combat manner would provide justification for the players having this knowledge.

Jake Bhattacharyya’s freshman offering is promising in many, many ways, and the revised edition shows a willingness to improve that I very much welcome and applaud: While structurally, the adventure is nothing special, it does a lot of things right from the get-go that many comparable publications botch: The information design is better than usual, though e.g. the keys could use some highlighting in the text. The NPCs getting notes on mannerisms, motivation, etc. is a great angle as well. And while the dungeon itself is not exactly a jamais-vu-experience, it does manage to cover two distinct themes, and the notion of the new creatures is intriguing as well. The revised edition is a straight improvement of the original version, getting rid of pretty much all formal hiccups, elevating this to an inexpensive, if slightly linear one-session dungeon module that I can recommend. My final verdict for the revised edition will be 4 stars.

If you enjoy my reviews, please consider leaving a tip, or joining my patreon.