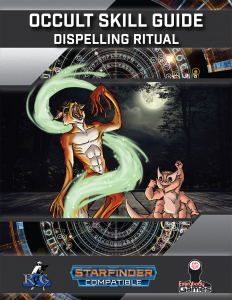 This installment of one of my favorite series for Starfinder clocks in at 17 pages, 1 page front cover, 1 page editorial, 2 pages of SRD, leaving us with 13 pages of content, so let’s take a look!

If that sounds complicated, it’s really not – if you’re familiar with PFRPG’s Incantations or Occult Ritual engines, you will be familiar with the basic premise of how these work. As all ritual-pdfs in the Occult Skill Guide series, you don’t need another book to use the material herein. Instead, the pdf not only concisely explains how rituals work in a step-by-step guide, it also comes with a detailed step-by-step guideline for the GM to create more rituals. And these rules are very tight. In fact, they are some of the smoothest I have seen, with ritual descriptors and component point budgets providing a framework for quick and easy ritual design based on a sensible framework: If your ritual has to do with [Meditation],, Sense Motive and/or Perception are key skills; for [Liturgy] rituals Culture will be key; for rituals that have the [Routine] descriptor, we’ll use Computers. And you won’t have to calculate costs – or much at all. In fact, you’ll get to consult a massive table, and rock them out.

As for the focus, we’ve seen quite a few cool examples so far, but this one deals with a very common issue in any gaming dealing with magic – dispelling. Using dispel magic can be SUPER anticlimactic – it might work for battle-buffs and the like, but more potent effects? In such cases, it might be lame to have an easy way to cancel them. Similarly, dispel magic is not available at 1st level. Well, enter this ritual, for it’s a level 1 abjuration [occult] ritual that takes 1 hour to perform. The primary ritualist must have a family-level bond with the target, and for reagents, we need soil from the target’s childhood home, blessed oil, expensive quartz sand and candles. The ritual must be performed under a full moon during a solstice or equinox on the target’s home planet.

The soil is mixed with the sand, and the ritual is drawn on the floor around the target, who may not be wearing or wielding equipment. Candles are then placed in certain directions, and blessed oil traces the seal, while the entity blessing the oil is invoked; at the conclusion of the prayers, the candles are lit in a specific order, and the primary ritualist prostrates until the candles are burned down. The DCs for the Mysticism checks are pretty high – but here’s the amazing thing: At every step, you can instead relate a story you share with the target – and use a skill in that story. Say, the target saved the ritualist when they were climbing in the mountains? That’d make Athletics a viable candidate! Each step must evoke a different memory. And yes, this does enhance the backlash (which, in this instance, is not fatal, but a long sleep, which, when interrupted, will see the characters severely sleep-deprived), but it is awesome. It rewards the players for weaving background stories that their characters share, for, you know, roleplaying. Awesome.

On a success, the power of the emotional bond and memories is converted into vibe points: For each skill check succeeded, the ritualist generates 1 vibe point, and if they surpassed the DC by 5 or more, that enhances further. If memories were evoked in the check, 1 vibe point per point the DC was beaten is instead generated! Relationships (as per the Advanced Skill Guide) also help here…and finally, there is the option of selfless sacrifice: You can take ability damage or drain, damage, lose mementos – or, you can sacrifice your youth, revert to adulthood (including total memory loss/becoming an NPC) – or make the ultimate sacrifice, losing your life. These last sacrifices, obviously, create vast amounts of vibe points. Depending on the vibe points accumulated, you get scaling dispel check bonuses and the maximum spell and ritual level you can best with the ritual increases. A level 1 spell effect only takes 6 vibe points; a level 1 ritual takes 30…

Of course, the pdf does feature a proper legend, and a suggested encounter – if a PC has, for example, been transformed into a skinsuit (still one of the most horrifying rituals, imho…), this ritual may well reverse that…

Editing and formatting are excellent on a rules-language level; on a formal level, I noticed e.g. an instance of “Generations” instead of “generates”, but nothing serious beyond typos. Layout adheres to the series’ neat two-column full-color standard, and the pdf comes with quite a few nice full-color artworks. The pdf has no bookmarks, but doesn’t necessarily need them at this length (unless it’s your only ritual pdf, in which case that might be slightly annoying).

Alexander Augunas’ shatter spell ritual is amazing. It is hard enough to pull off to make spamming it not an option, even for optimized groups; it has rewards for proper roleplaying hardcoded into its rules, and the math checks out. This is how serious curse-breaking and magic should feel – it ties into emotions, connections, sympathetic resonances – and, as an aside, thus also perfectly aligns with the in-game explanation for why rituals work in the game. This is certainly a ritual that many a group of players will wish to perform at one point. Highly recommended, 5 stars + seal of approval.

You can get this excellent, super-useful supplement here on OBS!