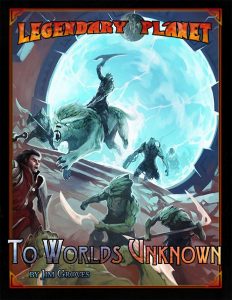 The first „proper“ installment (if you do not count the optional introduction adventure „The Assimilation Strain“ clocks in at 98 pages, 1 page front cover, 1 page inside of front cover, 1 page editorial, 1 page SRD, 1 page ToC,2 pages of introduction, 4 pages of advertisement, 1 page inside of back cover, 1 page back cover, leaving us with 85 pages of content. HOWEVER, this is not all – the module also comes with a pretty darn massive art and map booklet that offers 27 (!!) pages of handout-ready artworks AND full-color maps. Oh, and suffice to say, the full-color maps *do* come with player-friendly, keyless iterations – kudos!

This adventure is intended for 2nd level characters, Medium advancement track, and they’ll be 5th level by the end of the adventure – if they haven’t been squashed, that is. Legendary Planet is a sword and planet AP intended for the discerning PFRPG-connoisseur, and as such, the difficulty is nothing to sneeze at. The module is not unfair, mind you, but it *is* an adventure that the PCs will not cakewalk through.

I actually was a backer of this massive AP back in the day, and while since then, SFRPG and 5e conversions have been made available, my reviews of the AP will be based on the PFRPG-iteration, since that was the original system this was intended for. Structurally, this will be very familiar to anyone who has ever seen an AP: The module takes up the main meat of the pdf, and after that, we have supplemental material, save that there is more. Yep, much like the amazing art & map folio (which should be industry standard), we get quite a bit more – Sean K. Reynolds, for example, has penned a whole planar pantheon write-up (with each deity getting their own symbol), Chris A. Jackson providing a bit of prose, and a pretty massive gazetteer that deals with Argosa, a hub-world of sorts, including Zel-Argose the gateway city. The module also includes 5 new exotic weapons and 5 magic items – 3 of which do get their own full-color artwork. These include projection periapts, essentially two-way mago-holographic communicators, a harness that reduces gravity for the wearer and a vine that enhances natural healing. Sword and planet vibes are hard to nail down, but this delivers.

The bestiary section includes the playable bhagra dogfolk, who receive +2 Charisma and Strength, are Medium, get a 1d6 primary natural weapon bite, low-light vision, and a bonus teamwork feat. Beyond these, we have the peaceful CR 4 Elali, psychic shepherds of the Accord, and the jagladine – which are a serious threat. Think of these fellows as particularly nasty, smarter thri-kreen that can absorb diseases and poisons and excrete a liquefied version of the poison or disease. They also have created the Klaven-species, deadly shocktroops with an inherent, nanite-based status. They are essentially a conversion tool that bestows powers, but also quasi-undead characteristics on the target, and as such are represented by 2 statblocks (one for a foot-soldier, and one for a wolf-based war-beast) and a template.

Okay, so far so good, so what about the adventure? Well, we start off in medias res (as a linguistic aside – English “in the middle of things”, commonly expressed by “in media(s) res” as an idiom, unless my Latin deserts me, would actually be closer to “in medium rerum”), with the PCa awakening from a fugue state as abductees housed in an alien prison on the planet of Garsilt – not that they’d  know that now. The vicious Jagladine have abducted the PCs to extracting special information encoded in the PCs’ genes. Good news here –a rogue meteorite contaminated with akata has smashed into the facility. The PCs thus awaken into chaos, as the prison riot-like release of them and others throw them right into an ongoing fray – the PCs will have to contend with the dog-like bhagra before recovering their gear. Of course, there will be an issue regarding communication – but this is circumvented in a smart manner without handwaving, with a friendly aasimar called Andretta offering her translation services.

Speaking of trouble-shooting – monster identification and means to handle it are also talked about, as the PCs try to best the deadly Klavek. The custom monsters and NPC guidelines certainly go above what we usually see in Paizo APs, with plenty of custom creatures – like a melancholic ooze swarm, mindslave mimics, and the like. The module also allows for more social problem-solving, in spite of its action focus – there is e.g. a comozant wyrd the PCs can ally with, and ultimately, the PC’s goal will become clear – reach the stargate, and escape the facility. A task that is btw. made easier if the PCs befriend the little robot BR-N3R. The whole action is intended to be pretty relentless, and the section offers several timed events – with a touch of horror, we have a tauslek matriarch as a first “boss”-like encounter; facility power will be compromised, with aforementioned wyrd as a unique ally that fills the PCs in on the chance of their imminent demise by being struck by meteorites – and in the end, the true boss? A frickin Klaven inquisitor! This boss fight is brutal at this point, and the PCs should be able to finally escape by the skin of their teeth.

The transition through the semi-malfunctioning artifact-level Stargate here will double as the justification for mythic ascension, granting the first tier – and it is assumed that the PCs gain the Morphic Nature feat that automatically adapts the players to the local environment of a planet – this does not allow them to exist in vacuum, but it gets rid of one crucial issue that the genre would otherwise face. The PCs will exit the gate in a fully-mapped lost temple, and also hear, for the first time in a while, the Common tongue. The PCs thus encounter friendly faces – individuals press-ganged into helping the Jagladine , who are seeking a way out of their deal with the Jagladine and their Klaven. The module thus changes gears from a pretty tech-themed dungeon to one that feels more relaxed, more classic fantasy – and after this one, the PCs are off to aforementioned city of Zel-Argose, faced with the vast amount of wonder the setting offers.

The city features guilds, water treatment plants, battle pits – and here, the so far linear story allows the PCs to bask in the wonder that is so central to the sword and planet genre: The PCs can fight in the arena, attempt to find the jagladine prison commander Lomrick, get involved in the city’s politics…and ultimately, Lomrick’s trail will lead them to a seedy (and dangerous) cantina…which can be rather challenging. Their target’s mansion, though, will be an even greater challenge – including a cerebric fungus sorcerer ally of their former jailer, and the means to save one of the elali Relstanna and defeat Lomrick – Relstanna also tells the PCs that Lomrick was a member of the Scions of the Celestial Helix, a sect of fanatics seeking to return an elder evil to the multiverse…it seems like the heroes have their work cut out for them!

Editing ad formatting are excellent on a formal and rules-language level. Layout adheres to the series’ elegant 2-column full-color standard, with a LOT of text per page. The module is also decadent in its massive amount of original, top-notch artwork and full-color cartography. The map-support is excellent – full-blown, detailed full-color maps, with player-friendly versions included? Heck yeah! The module is fully bookmarked for your convenience, with nested bookmarks making navigation simple and painless. The art and map folio is superb and should be industry standard.

Jim Groves penned this adventure, with Thurston Hillman, Jeff Lee, Jonathan H. Keith and Andrew Christian, Sean K. Reynolds and Chris A. Jackson providing additional design and content – and this is genuinely one of my favorite modules from the author’s pen. Jim has managed to deliver a consistently-challenging, exciting action romp that does not let up; the first section of the module is challenging, brutal and simply amazing in how its timed encounters can help you add up the tension and maintain high pressure. After that, the change of pace to a more free-form and relaxed adventuring is very much perfect, as it allows the weirdness of the PC’s situation, the “fish out of water”-angle, to fully develop. Now, it is pretty important that the GM reads the gazetteer to make this section work, but f properly executed, it will elicit a sense of wonder reminiscent of the Outcast videogame, John Carter, etc. – in short, pitch-perfect sword and planet. Add to that the neat set-ups for the remainder of the campaign, the rather detailed notes for the NPCs, the creative builds and the well-tuned difficulty-curve, and we have a pitch-perfect starting point for the main part of the Legendary Planet AP. This is a thoroughly superb adventure, and I’m glad I waited for the AP to conclude, because I seriously would hate to wait for a continuation of this unique yarn. If you even remotely like Stargate, Flash Gordon and the good ole’ classics, check this out! 5 stars + seal of approval, given sans hesitation!

You can get this fantastic adventure here on OBS!

The Starfinder version can be found here.