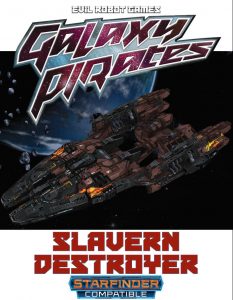 This installment of the ship-centric Galaxy Pirates-supplements clocks in at 12 pages, 1 page front cover, 1 page editorial/SRD; leaving us with 10 pages of content, so let’s take a look!

All right, this pdf includes two different versions of destroyers, the first of which would be the regular one –the Slavern Destroyer is a tier 5 large destroyer that is powered by an arcus ultra power core, and kept afloat by L6 thrusters and a basic computer. Budget medium-range sensors alongside a mk 5 armor and mk 4 defenses are included; common crew quarters and 4 expansion bays generate a somewhat Spartan sense here. Shield-wise, we have evenly-distributed light 60 shields.

The ship is armed to the teeth, as expected – two unlinked heavy laser cannons facing forwards, light laser cannons on port and starboard, with a light torpedo launcher on the aft. The ship has a turret with tactical nuclear missile launchers as well.

As mentioned before, there still are some proper Turan ships around, and the second destroyer is just than – the Tura Customs Destroyer is tier 8 and has L8 thrusters, powered by Arcus Maximum power cores; the heavy laser cannons on the front are linked, and we have heavy laser cannons on aft and starboard. Shields are Medium 100 (evenly-distributed) With mk 6 armor and mk 4 defenses, a mk 2monode computer and advanced medium-range sensors and good crew quarters, the whole theme established is surprisingly different, while still sharing similarities. Heck, we even have biometric security locks! This is also represented among the expansion bays – with a trivid den, a medical bay and a tech workshop, this feels like it values the lives of those aboard more.

Both ships come with their already filled in ship-sheets for your convenience, as well as the by now traditional tables to know the load-out of the ships via Computers checks. Similarly, the cut-out paper-mini-like versions are included. Much to my joy, we do receive massive 1-page handout-style artworks that feature the ship in a unique depiction from front AND back! Even better: We receive no less than 4 (!!) pages of maps – one depicting the cargo hold, one that presents the main section/place where live freight is transported, and another page for engineering and gunnery. These all come with rather impressive details, with only the cargo-hold featuring letters marring the beauty of the map. Since these do not hamper the integrity of the ship or provide spoilers, I have no complaints.

Editing and formatting are very good on a formal and rules-language level – I noticed no issues while reverse-engineering the ships. Layout adheres to the series’ printer-friendly two-column standard with gorgeous full-color artworks for the ships provided. The full-color cartography is detailed, cool and we get quite a lot – that can be btw. printed out and put next to/atop each other. Add minis, good to play. AWESOME and makes these very user-friendly!

Paul Fields and Jim Milligan deliver some amazing destroyers here; going above and beyond with both artworks and maps, while presenting ships distinct from one another. All while yet still sharing a common heritage! This is a great little supplement and very much worth owning. 5 stars + seal of approval. Love it!

You can get this inexpensive, fully mapped ship here on OBS!

Enjoying my reviews? please consider leaving a direct donation or supporting my patreon. Thank you.