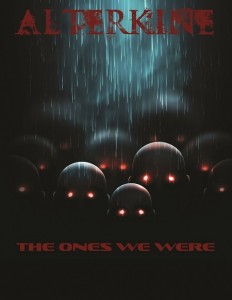 This module for Alterkine clocks in at 38 pages, 1 page front cover, 1 page editorial, 2 pages blank, 1 page back cover, leaving us with 33 pages of content, so let’s take a look!

All right, only GMs left? Great! Our world has recently been graced by a strange meteor shower and the PCs find themselves in a moderately priced bar in the tourist trap Coppersmith, where they are contacted by one Betram, who represents parties intrested in Delsvale – which has shut down operations since the meteor shower – hence, the players, via an ominous black limousine and a chopper, enter the target area.

Delsvale town does look like an eerily ghost-like town, including roving animals. Things turn grim fast, though: The barbed wire fence the players encounter has a breach and said breach is stuffed with human corpses, from which a woman crawls forth, obviously doomed to die from her extensive injuries – and things look grim. Animals are getting crazy, a sect of weirdos have sprung up and the military has rolled in. Entering the quarantine zone, the PCs will have an option to subdue an investigator/journalist and the PCs will soon have a first encounter with a disturbing creature, the clotter – a shambling creature of grafted undead material, a walking sack of offal and bone, hungry for blood of the living.

Things become worse fast from there – the recruiters of aforementioned sect hand out crystals that may well cause infection with mutagenic viruses…just before the military swoops in and takes the PCs hostage. It turns out, the military is planning to bomb out the local mine…but aforementioned clotter monstrosity may actually provide a window for the PCs to escape from captivity. It should also be noted that a two-legged walker/mech is among the adversaries the PCs may encounter, of course, just one of multiple random encounters the PCs can encounter.

The local nightclub would be a crucial place: Here, the PCs are contacted again by the cult, as the leader, one Daniel Sutter (nod towards Sutter Cain, mayhaps?) tries to set up a meeting with the PCs – but if they agree to hear them out, they may ostracize the military if they haven’t already. Meeting up with Sutter puts things in perspective: Living in his gothic mansion, the cult leader may be a foreboding character, but he still offers some crucial insight: You see, he literally owns Delsvale and has a research venture in the mine – alas, his own men betrayed him, claiming the crystals, which he considers to be divine. He does directly contradict the narrative that sent the PCs here – this Betram fellow obviously lied to them. It should be noted that NPC-interaction in this module tends to be pretty detailed, with quite a few sample sentences, meaning that GMs less comfortable with verbatim improvisation get enough guidance herein.

Beyond the strange amalgamated monstrosities like bear/frog-hybrids, the PCs will sooner or later have to go to the mine – where they get a glimpse of a horrible thing with too many tentacles and mutations and brave cybernetic adversaries before they find a lead-researcher, who asks them to destroy each and every crystal they can find – in an inversion of the trope, these guys are actually smart…and thus, the module’s variable conclusion dawns, as the PCs have to brave the mutagenic influence of the fallen star, decide whom to help…and deal with the grotesquely Scaxtion – insane and with empathy/emotion-controlling bursts of aura. How the final confrontation turns out and whether the mutating PCs succumb to the influence of the fallen stars, how the whole thing ends – it all depends on the actions of the PCs.

The pdf concludes with quite an array of diverse adversaries, many of which sport unique and rather interesting builds with Achilles heels that reward smart rolelaying and nice signature abilities – it should be noted that even the random encounter sport several unique monsters. The pdf also sports 4 new mutations as well as 4 excellent player-friendly b/w-floor plans.

Editing and formatting are top-notch, I noticed no significant glitches. Layout adheres to a rather printer-friendly two-column b/w-standard. Cartography is nice and solid. The one weak component of the pdf is the CGI-artwork – while it works for the mech, the humanoids in particular are ugly and the final boss’s artwork is horrible, doofy even, and subverts the threat it poses. The prose deserves better, so I’d suggest relying on your descriptive powers here instead of showing off the artworks. If you’re going for a serious tone. If you’re instead aiming for a schlocky B-movie feeling, these will be GREAT and hilarious. Bookmarks are there, but cover, mysteriously, only the new mutations, meaning they might as well not be there at all – a comfort detriment when running this via an electronic device.

Josh Vogt’s module for Alterkine manages to create a pervasive sense of foreboding and its sandboxy structure and means for aligning with the respective factions is great. More importantly, the builds of the monsters and NPCs are varied and showcase well what awesome things can be done with Alterkine’s rules. At the same time, the sandboxy structure does feel a bit inconsistent – not in its execution, but in its presentation. On one hand, key-NPC-interaction provides quite a bit of hand-holding, while the transition from scene to scene is more free-flowing and requires some work on behalf of the GM. This does not make the module flow badly, mind you – it just means the module is more versatile, but also more work than it could have been. A more pronounced structure would have helped the GM here – though, admittedly, I’m being a nitpicky bastard here.

In the end, this is a fast-paced, pretty apocalyptic and dark little module I thoroughly enjoyed. The builds of sample monsters bespeak a precise understanding of what makes unique foes tick and the low price point also helps make this a worthwhile offering. While the book could have used somewhat better transitions and while the artworks are ugly and bookmarks could be more extensive, the actual content of this module is pretty awesome. I enjoyed the finale, the boss battle, the factions…in fact, most of the content herein. Hence, my final verdict will clock in at 4 stars for the purpose of this platform.