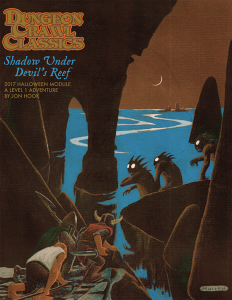 The third DCC-Halloween module clocks in at 24 pages, 1 page front cover, 1 page editorial, ½ a page SRD, 1 page advertisement, 1 page back cover, leaving us with 19.5 pages. Unlike previous Halloween modules, this one is laid out in standard size, so it’s actually a tad bit longer than the two shorter ones I’ve covered so far. But does quantity mean quality here? Let’s take a look!

It should be noted that the final ½ page of the module contains a couple of pregens, in case you have casualties. The module is intended for 4 – 6 first level characters, but it may also be run for quadruple that number 0-level funnel characters. Indeed, I think this may work better as a deadly funnel or one-shot. I strongly suggest the party to include a character with the Animal Trainer occupation, and I REALLY recommend the group to be able to cast Comprehend Languages. You’ll see why later.

The module does provide read-aloud text and a handwave-style abstractions for quick mass-combat resolution for 0-level NPCs. This sidebar is pretty much superfluous as far as the module is concerned

However, before I go into the details, I will pronounce the obligatory SPOILER-warning. The following thoroughly discusses the module. As such, only judges should continue reading.

All right, only judges around? Great! So, this is, as the module acknowledges, a kind of homage/riff on “Shadow over Innsmouth.” It begins in the backwater place named Black Sand Port, where wreckage has a couple of strange survivors of Fu-Lamian descent wash ashore. The greed of the burgomaster’s spurred – and hopefully that of the PCs, as the survivors tell them about Princess Kaeko, who had been aboard their crashed ship. A list of 18 rumors is provided for the region.

It is assumed that the PCs basically steal a boat and get it towards the infamous coral reef known as the eponymous “Devil’s Reef” – and there is a chance to save some survivors. Making their way past the saltwater graveyard created by razor-sharp corals and the sharks that haunt these waters, the PCs enter the jagged landscape, where the boat may take damage if the PCs don’t get the pattern of reefs. A failure damages the boat. How much damage can it take? Well, the boat doesn’t get stats when it’s acquired – these are hidden in a somewhat counter-intuitive manner in the first encounter potentially featuring it.

The coral island does come with random encounters that center mostly on deep ones. There is a deep one caster here with a name, and the island otherwise is pretty brief; there is an onyx pillar topped with a ruby. Touching the pillar shocks you; shooting at the ruby will the pillar fire a lightning bolt at the offender. Hitting the ruby with a ranged attack has a small chance to knock it loose, and touching it after that may provide a flash of insight that is one of the obtuse ways to solve a bottleneck of the adventure – but more on that later.

It would make sense for the PCs to explore the wrecked ship, the Royal Dawn, and the brief exploration of the ship wreck is indeed interesting: Provided the PCs haven’t yet experienced it themselves, they will have heard about it/deduced it: oddly, proximity to the island and exploration seems to make the respective persons undergo a kind of transformation – in 8 steps towards a Deep One Hybrid, with step #8 equaling game-over. This is per se a solid angle. Anyhow, the Royal Dawn shows serious signs of struggle, and exploring it may put the PCs into a dialogue with a statue of Farrin-Shae, the guardian demoness of sorts of the vessel, who might well proceed to animate the slain on board into devil-like looking things that actually are undead. The true treasure of the vessel, though, is actually something the PCs may well slay – the abducted princess had a pet, a so-called psi-spider, and its touch/attempt to communicate causes damage. Animal Trainer AND resisting the impulse to slay it, is one thing that will make the finale/aftermath much easier – provided the critter lives through the module, that is.

Anyhow, back to the isle, as ultimately, exploration of the wreck could conceivably be skipped: On the island, there is a set of lavishly onyx double doors: A piece of b/w-artwork shows a character being fried by them, and the choice to make this artwork is utterly puzzling to me. Why? Well, the door has two dials that may be moved in one of 5 positions. Can’t read Aklo/don’t have aforementioned spell? Well, have fun trying to frickin’ brute-force the doors and being shocked all the time. Two of the runes, provided the PCs can read them, correspond to Celaeno and Polaris. Okay, so what? This looks like a puzzle that was supposed to feature a visual representation…you know, like quite a few Goodman Games DCC-modules offer? Instead, we get a solid, but ultimately useless artwork. Oh, and there are TWO such doors in the module. The second one has a different combination!

The least frustrating approach here is indeed when the players have not learned from being zapped by aforementioned ruby and knocked it down – then, at least they know the combination. This should have been a puzzle, and instead is an exercise in frustration and trial and error. That happens twice. Blergh.

Beyond the doors lies the truth, the reason for the mutation-impulse that has taken a hold of NPCs and PCs alike: The PCs stumble into an Elder Thing lab, where a star-spawn of Cthulhu is kept trapped. Its presence sends a telepathic impulse to the DNA of creatures nearby. But I’m getting ahead of myself: The PCs first have to slog through 3 rooms that are thoroughly linear: A slide must be passed, then a couple of deep one hybrids and a shoggoth await the PCs. And this is where I uttered an exasperated “Really?” – the shoggoth is strong, but still utterly pitiful regarding its power, considering that it’s a frickin’ shoggoth. And, in a grating deviation from DCC-design aesthetics, it can’t be bypassed, has no means to make it easier, nothing to reward smart players. Oh, and running past it is no option. The PCs first have to brute-force the second frickin’ dial-door to proceed. Instead of rewarding capable players, the module suggests wounding the shoggoth. *sigh* Why does it have to be a frickin’ shoggoth?

In the halls beyond that, the PCs can interrupt the hibernation of elder thing scientists and pick them off one by one. Yes, this is about as fun and as redundant as it sounds. The hibernation cells, btw., have a mechanism that locks and floods them. And the module gets drowning rules as established in DCC wrong. How do you prevent drowning? Well, obviously with Reflex saves, right? Because agility totally translates to how long you can hold your breath? WTF. How this one could slip past editors is puzzling to me; it contradicts how drowning works.

The finale has the PCs fight more elder things, fiddle with a console whose functionality they can’t deduce, and thus release one of three tanks – either mad Deep Ones (including the princess),a dead star-spawn, or an alive one. It’s totally luck based what happens. The module has a couple of promising notes for elder thing tech and living glowbug critters…but guess what elder thing tech does? They’re spells in a can. I kid you not. Oh, and good luck if the psi-spider’s not with the PCs – it can snap the deep one corruption out of the princess. Te star spawn of Cthulhu has btw. 14 hit points, and mundane weapons do minimal damage. It’s wounded by experimentation, but still. That’s just sad.

Editing and formatting are not on the level I’ve come to expect from Goodman Games. On a formal level, the module is tight, but rules-sequence and integrity is pretty compromised in a couple of cases, and there are instances of spells not properly formatted. Layout adheres to a two-column b/w-standard and the pdf sports nice b/w-artworks. Puzzling: The module’s pdf has no bookmarks, which constitutes a comfort detriment! The cartography per se is gorgeous, but the wreck’s map has no grid, and we do not get player-friendly versions of the maps.

Are you really, really tired of the Cthulhu-mythos? Do you want to complete the process by which it’ll lose any form of coolness and horror? Do you want to complete the transformation of the creatures into just another type of critter to be slaughtered by your local MurderHobo Inc.? Then this is the module for you! After this, neither shoggoths, nor star-spawn, will ever elicit more than a yawn from your group. It’s also simply badly-designed, blending bad Cthulhu-scenario design with obvious issues with the DCC-rules and design aesthetics that I love so much. There is no rewarding the players for smart playing here – it’s all up to chance and trial and error, ostensibly justified by mythos being weird in the time-honored tradition of bad Cthulhu-scenarios. John Hook’s “Shadow under Devil’s Reef” is not even remotely creepy and feels like a paint-by-the-numbers standard pulp-Cthulhu scenario of the weakest sort, lacking the Appendix N-flavor and heavy metal aesthetics that I expected to see.

You see, I didn’t even expect this to be creepy in any shape, way or form. It’s not, by the way. Not at all. However, it fails miserably at making the mythos-creatures feel cool, it fails at blending DCC’s heavy metal-influenced aesthetic of fighting against…THINGS with the mythos. It also fails as a spoof. It’s not funny, nor badass. Know who does the whole angle better? Pretty much everyone. For horror, Call of Cthulhu and Trail of Cthulhu are better. For (dark) fantasy adventuring, Paizo and Kobold Press have vastly superior modules, and Fat Goblin Games’ “Shadows over Vathak” setting actually manages to craft a fantasy world that is heavily-influenced by mythos aesthetics without being cliché and redundant. Oh, and if you really want heavy metal aesthetics and weirdness, I’d strongly suggest taking a look at LotFP’s Carcosa or Venger Satanis’ “The Islands of Purple-Haunted Putrescence”. Heck, Venger’s early work, while a bit rough, successfully manages to blend the “OMG, how cool is that”-metal aesthetics, horror and even funny bits and create a cohesive whole. I’d take his flawed, but inspiring “Liberation of the Demon Slayer” over this bore-fest any day of the week.

This sounds harsh, but I was really, really pissed off by this module, by how utterly uninspired and flawed it is. I honestly feel like I wasted my money with it. In stark contrast to the previous Halloween adventures, this is not a dip, but a free-fall regarding quality. My final verdict will clock in at 1.5 stars, mainly due to Goodman Games’ high production values, and while I briefly contemplated going 1 star due to the lack of bookmarks and player-friendly maps, I will round up due to in dubio pro reo.

Only buy this if you’re a completionist. If you’re willing to convert modules, there are vastly superior offerings pretty much everywhere.

You can get this adventure here on OBS. Don’t say I didn’t warn you.