Advanced Adventures: Beneath the Heart of Empire (OSR) (Patreon Request)

Advanced Adventures: Beneath the Heart of Empire (OSR) 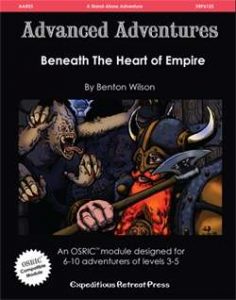 This installment of the Advanced Adventures-series clocks in at 9 pages, 1 page front/back cover, 1 page editorial, 1/3 of a page SRD, leaving us with 6 2/3 pages of content, so let’s take a look!

This module is part of a series of reviews made possible by my patreon supporters, to be undertaken at my convenience. Like all adventures in the series, this module is penned for the OSRIC-rules system (based on 1e), and like all adventures in the series, rules-language formatting deviates from the standards of OSRIC, but is pretty consistent, so functionality is not impeded. Spells and magic items are bolded. The adventure is intended for 6-10 adventurers of levels 1 – 3. Wait, doesn’t the cover say otherwise? Yep, but the editorial page has the correct level-range stated, and the module’s actual text also confirms this – level 1 -3 it is. At levels 3-5 as the cover suggests, the adventurers, even considering the lesser degree of power-gain of old-school editions, curbstomp the opposition. Considering that the adventure isn’t that difficult as far as old-school games are concerned, I’d strongly suggest using it up to 2nd level, at the very highest – unless you really want to play it safe. The plus-side here would be that conversions to systems that assume a very low power-level is pretty easy.

The module provides functional cartography for its two levels, and no read-aloud text is included. The supplement includes a level 1 magic-user spell that is pretty interesting – blood servant, a means for low-level characters to cast animate dead at essentially the cost of permanent damage while the servant exists. I like this. It imposes a serious toll to offset the power-gain.

As far as setting is concerned, this one does something pretty nifty: It assumes a kind of second renaissance of a decadent late-Roman empire style place, one that went through a period of conflict, which saw parts of it squashed and sunken beneath the ground in a magical cataclysm: Picture e.g. Calligula’s reign being ended by a magocracy, with Rome rebuilt atop the old ruins, and you have a good idea of the theme here. The background provided, this notion of the graveyard of empires, is something that resonates with me – and indeed, the module does reflect this type of flavor in both keyed and random encounters. The module covers two levels, but only one of them features a random encounters table, which is a bit of a pity.

Indeed, I wholeheartedly suggest that, if anything, you should use this module in the context of a quasi-Greco-Roman civilization, mainly because it is the main draw of the module, or at least, it was for me. I have played through this adventure with my group, which finished it in ~7 hours, and it is one of the adventures that plays better than it reads. Do note that my players are very fast, experienced, and efficient at clearing dungeons at this point – no surprise there.

Okay, this out of the way, from here on out, the SPOILERS reign. Potential players should jump ahead to the conclusion.

All right, only GMs around? Great! So, bad news first: The first dungeon-level is actually a sewer-level. Moreover, it is a sewer-level without a distinct theme in multiple ways. The module offers several adventure hooks, which are not bad per se, and tie in with the various factions. In a way, the sewer-level consists of individual encounter-areas close to each other – the hidden base of the slaver, the failed necromancer’s laboratory, the exiled kobold tribe…these per se are not special, but they do mean that there are quite a bunch of things going on, including disgruntled gladiators. This is also where one of the new monsters, essentially a ball of tentacles with an (inefficient) mouth may be encountered – this monster was a better experience than it read, mainly by diverging from the expected “draw target to mouth”-angle. The sewer is, in essence, just a thoroughfare towards the second level, which is a decadent noble’s sunken villa, including a little arena.

Considering this, the sewers do a relatively neat job – but they, like many of the less successful sewer-levels, fail to capitalize on their environment. Where is the danger to contract diseases? How deep is the muck/waste if/when the PCs inevitably fall in? Is it a quick-flowing, pretty liquid stream? Is it more like quicksand? No idea. So yeah, as far as global terrain features influencing adventuring, the module doesn’t do a good job. (And never mind sewer gas or stuff like that…won’t find any of that here.)

The aforementioned second level is significantly more interesting, posing, among other things, an optional boss – an undead gladiator that needs to be solo’d to end his misery…and without honorable combat? Well, then the low-level group will learn the hard way that refusing the honorable duel will shore up its defenses. This dust centurion is certainly one of the toughest, perhaps the toughest encounter herein, but if the PCs triumph honorably, they will be rewarded duly. Ending the boredom of an undead senator? Also pretty interesting. These encounters are surprisingly compelling for the brief page-count, and they capitalize on the implied setting. They do lose some of their flavor if not run in the proper context, hence my recommendation above regarding the cultural backdrop. (I happen to be GMing currently in a quasi-late-Roman decadent city, so that worked rather well.) That being said, the module should have done a better job highlighting the height-differences between arena stands/lodge and arena, if any. It should be noted that it might make sense to use all adventure hooks, and not just one, for quite a few of them can actually be solved on the sewer level.

Anyhow, this notion of wrecked magical decadence is also reflected in e.g. an old garden, maintained by magic in the absence of light, which featured a variant of one of my favorite monsters of all time – the tri-flower-frond, which I used to almost TPK my very first group, traumatizing my players regarding plant monsters to this very day. Though, here, it’s an agave with similar abilities – the third new monster included here. I am aware that it is essentially a slight redesign and reskin, but it is one that perfectly hit one of the few mushy soft spots I have as a reviewer and GM. So yeah, that critter actually got a combination of dread and cheerful nostalgia at the table – something that very rarely happens.

IS there an overarching story? Not really. Instead, these are several disparate quests, tied together by proximity; and while none of them are truly remarkable, they gel together surprisingly well; better than they have any right to, considering the brevity of the adventure…or rather, encounter-selection, for that may be a better way of thinking about this module.

Editing and formatting are good on a formal and rules-language level. Layout adheres to the series’ no-frills b/w 2-column standard, and the pdf features no extra interior artwork beyond the one on the cover and the piece on the editorial page. Cartography is b/w and functional, though not exactly mind-blowing; much to my continued chagrin, no player-friendly versions are included. And yes, I will complain about the lack of player-friendly maps in every single module lacking them. On the plus-side, the pdf comes fully bookmarked for your convenience.

This is Brenton Wilson’s freshman adventure (apologies to you, Sir, if your name is “Benton” instead; OBS has you listed thus, but I assumed the module to be correct here) as far as I could tell, and I seriously should hate it. For one, it’s a sewer-level, and it commits the deadly sin of not actually making its sewer feel, well, like a sewer. Its new monsters are anything but new, and rather fall more on the reskin side of things. It has no central leitmotif, and feels like a disjointed series of encounters, because that’s what it essentially is. It spends a third of a page of its sparse wordcount explaining the history of a city we don’t get to see or explore.

I should HATE this.

I really, really don’t. Not even remotely. Yes, it is a disjointed series of little stories and encounters, held together by being lumped into a small section of a vast setting’s sewers. Yes, the monsters are reskins and nothing to mechanically get excited about. But it is VERY evident that this WAS playtested by the author. The challenge is on par and fair; the little stories that are here all have this small edge that show that the author genuinely cared – whether by cultural components, by reskinning of familiar monsters, that make it feel and play much better than it has any right to. If anything, the module’s one downside is the very strict wordcount it indubitably had to operate with. These encounters, this backdrop, deserved more room to shine. Even considering its shortcomings, I can’t claim that this was not fun; I can’t claim that this was mediocre. It should, by all accounts, have been, but it’s not. It is surprisingly enjoyable, and I’d recommend it over the combined total of Alphonso Warden’s Advanced Adventures any day of the week – I had more fun with the slightly more than 6 pages here. I genuinely would like to see more on this setting from Brent Wilson’s pen.

That being said, much of this joy is mainly founded upon the implicit backdrop setting – if you seek an adventure for the context of a traditional, non Greco-Roman fantasy city, then this will lose much of its appeal; you could still run it, but it’d lose its soul. It’s also predicated on how much you enjoy having this living little sewer-section with its small quests; in a way, I wouldn’t recommend this as a stand-alone adventure; instead, I’d suggest using it as a supplement to your own city, as some small questlines you can introduce when your players ignore your carefully-woven plot for a brief stint in the sewers.

This leaves me in a tough spot as a reviewer. On one hand, I really don’t think this should be considered to be a module of its own; and yet, on the other hand, it works, like a dungeon-version of a mini-anthology of sidequests and surprisingly interesting places. Ultimately, whether or not this will be as fun to you as it was for me and my group, will depend on the cultural context of the setting: If you do have a quasi Greco-Roman backdrop that has seen at least one cataclysm that’d have made a villa sunken beneath the sewers plausible, then get this – I am pretty sure, you’ll enjoy it! If you’re instead playing in a more traditional medieval context, then this might be less compelling. I trust your discretion for rounding up or down; personally, since this seems to be the author’s first adventure, I’ll round up from my final verdict of 3.5 stars.

You can get this collection of side-quests/encounter areas here on OBS!