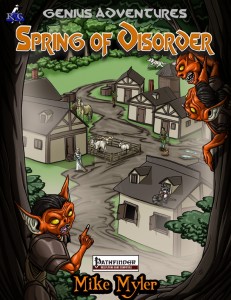 This module clocks in at 27 pages, 1 page front cover, 1 page editorial, 1 page SRD, leaving us with 24 pages of content, so let’s take a look!

The village of Feiknstafir (fully mapped and statted with a player-friendly map!), sheltered and peaceful, has seen the last of its serene days – odd things are afloat, as the PCs will almost immediately realize when the wolves attack the village and the local horses. There is something weird going on, and the PCs better investigate the string of unusual circumstances. While some of the townsfolk blame the animals of the forest for the antics and grief that has befallen them, it quickly becomes apparent that the PCs will have to venture into the woods to unearth the truth – also, since diligent investigation may point them towards the horse of the first man to go missing, one Varsk. meanwhile, things may slowly be pilfered from the PC’s purses, with one particularly cunning thief doing his best to relieve them of their tools – including counter-measures to bypass e.g. alarm-spells etc. We all know players HATE being stolen from, so that’s a nice way to get them invested from the get-go, though by far not the only one. And even if the PCs catch the thief – who could be angry at the cute raccoon?

While exploring the forest, this module will do its utmost to annoy the players – squads of animals will seek to create a thoroughly unpleasant experience for them by stealing whatever they can get their paws on. Thus, when the PCs finally find some goblins, they’ll be happy to fight – only to have the goblins surrender and guide them towards their tree village. This particular goblin tribe is usually at home in the high branches of the trees, and, as the chief explains, currently they are losing quite a few goblins – with bodies nowhere to be found. The surprisingly reasonable chief offers a magical weapon to the PCs for their investigation and threatens repercussions versus the forest’s wood elf enclaves.

Following the information gleaned from the goblins, the PCs can find caches of the wood elves, deserted and featuring encoded messages, from which they can pierce together that the elves have lost people as well and blame the goblins and the villagers of Feiknstafir – seems like the PCs are sitting on a powder-keg here, ready to erupt! Extremely cool – if you’re like me and your players like a challenge for their mind instead of simple dice-rolling, the series of messages can also be deciphered manually in a simple, nice puzzle I won’t spoil here. Kudos!

The scrawl leads the PCs to the gnomish settlement of Smaparmar (again, fully mapped!) – subterranean…and utterly overrun by unpleasant creatures. Uncanny valley territory indeed – no corpses, but traces of combat abound…including the fact that someone or something has cleaned up after whatever has eliminated the gnomish folk. Worse, upon leaving the complex, the animals attack in full force, potentially even kidnapping one of the PCs! (And yes, the array of animals are deadly – with multiple class levels, they can be deemed an almost functioning adventurer group!)

The finale of the module has the PCs find Kreller’s spring (again, fully mapped), where all the dead have been carried, and fight the true mastermind behind the animal uprising, a certain horse, which, alongside its brethren, has been awakened by the malevolent ghost of an adherer drowned by an adventurer in said spring. Whether the PCs just attempt to destroy the ghost and all opposition or reform the now intelligent animals for truly unique cohorts at higher levels, there is plenty of adventuring potential here.

Editing and formatting are top-notch, I noticed no glitches. Layout adheres to Rogue Genius Games’ 2-column full-color standard with nice full-color artworks and solid cartography supplementing it. The pdf comes fully bookmarked for your convenience.

Mike Myler’s “Spring of Disorder” is an uncommon module in that it oscillates between funny and utterly creepy, between suspense-building and minor frustrations, all ultimately leading towards a satisfying conclusion. Add to that the wholly unique opposition and the obvious (subdued) nods towards one particular Orwellian book and we have a great module here – with combat, investigation, social encounters, wilderness, easy puzzles and smart foes, there is nothing could complain about in here – my final verdict will clock in at 5 stars + seal of approval.

You can get this uncommon, cool module here on OBS and here on d20pfsrd.com’s shop.