Past Lives: Secrets of Reincarnation

Past Lives: Secrets of Reincarnation 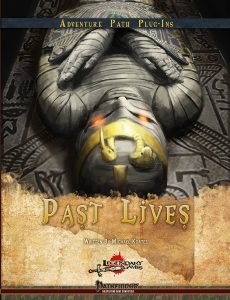 This pdf clocks in at 32 pages, 1 page front cover, 1 page editorial, 2 pages of introduction, 1 page ToC, 1 page SRD, 2 pages of advertisement, 1 page back cover, leaving us with 23 pages of content, so let’s take a look!

Reincarnation in d20 and its derivatives, ultimately (and undeservedly so) often boils down in relevance to being a subpar version of returning the dead to live and a plot contrivance. This pdf’s mission-statement is to change this. Formatting-wise, this is achieved via the introduction of a so-called past-life profile – and no, that is NO chosen by the player. A past life profile conveys a series of bonuses to a respective PC at certain levels – this is represented in certain abilities gained, etc. While the design-goal is that of a net-gain, each past life also has an accompanying disadvantage stemming from the experiences of said existence. The unifying downside of the past life profile is that spells that return the dead from beyond the pale do not work as reliably and require a caster level check to work – one modified by the PC’s Charisma bonus; the stronger the personality, the easier it’ll be to return the soul.

Past Life Profiles are pretty extensive: Each begins with a brief summary of the past life in question, proceeding then to denote how that person died. Then, we get a quirk the PC manifests due to the echo of the past life and then the abilities, based on character levels. The respective profile also has a reincarnation feat – the player gets to know the name of the feat…but not its benefits. It can be taken freely for a feat-slot, if the player qualifies. This is a cool way of dealing with the hazy aspect of past life memories. Finally, each past life also has notes on plot-development.

So, what do we get? Well, the first past-life profile would by Kyssalis, the elf-eater, lizardfolk queen of the Dead Water tribe, was captured and summarily executed by her adversaries. A PC with her past-life feels his voice fall an octave while angry and sports an irrational hatred of elves the PC is cognizant of. On the plus-side, the PC begins play speaking draconic and later levels net Swim as a class skill (or a bonus), favored enemy (humanoid[elf]), favored terrain (swamps) and even learns to execute a primary natural attack, qualifying potentially for Multiattack etc. This very much should give you an inkling of what these offer – flavorful bonuses, somewhat akin to roleplaying rewards/abilities sometimes provided by good GMs…and it doubles as an individual plot-line, as a kind of built-in roleplaying catalyst.

The next one would be Vantum H’Haran, phylactery hunter. Let that sink in. Now that’s a high-risk job-description if there ever was once! And indeed, the mysterious abilities this one conveys represents well the potency the previous life must have had – flashes of insight, arcane counters – the abilities gained are significant, but the flashes of past potency similarly can be disquieting; one ability, for example, renders you staggered for a whole day the first time you use it. This ties in perfectly with the established narrative tropes associated with the experience – and indeed, allows for a type of storytelling experience that is enhanced by this humble set of rules. A PC who was a legendary smith in a past life may literally learn to speak with swords! Death by fire, on the downside, may actually see certain, defensive magics…just fail to work for the PC.

The past lives presented here are not, at least in my opinion, double-edged swords in the traditional sense; instead, it may well hope to consider them to be character-arcs and roleplaying assists that require exactly 0 work to integrate into a given campaign. Whether it is a paranoid conjurer queen, star-crossed lovers or even a deity, replaced by a doppelganger demon (whose header is oddly formatted differently than that of the other profiles)…or perhaps, you’ll find out that you once were a renegade aboleth, obsessed with imbuing slaves with a modicum of free will (hey, for aboleths, that’s ultra-liberal!) – in any of these cases, the potential for roleplaying and the unique quirks that past lives result in can and must be seen as nothing short of amazing.

Now, as mentioned before, the respective profiles allow access to their own unique feats – a total of 7 would be provided. While I could nitpick one for noting caster level in two of the 4 benefits and not in the rest of the two, the intent remains clear – and the benefits are damn cool…cool enough to warrant taking the feat: Said example would allow for immediate action utility spells/healing to get you out of all manner of nasty situations, for example. Another feat lets you designate an intended wielder of powerful magic items you create, enhancing the respective weapon for this individual by perk and quirk. What about being a walking fire extinguisher?

Even cooler: We also get at least one unique magical item per past life, several of which receive their own full-color artworks. These items, once again, allow for unconventional tricks: There would be a grimoire, which provides a chance for you to bypass magical wards with passwords. There would be a powerful weapon that can be enhanced with a metal band (can we please have more thus upgradeable magic items?) and there similarly is a brooch that reacts to negative conditions via helpful spell-based benefits. You’re blinded? Great, you turn invisible for a brief period of time. Promise rings of aforementioned star-crossed lovers? Check. What about a ring that lets you generate instant, water-filled trenches? Yeah, cool. The pdf concludes with a brief table to randomly determine past lives.

Editing and formatting are good, but not as tight as usual for legendary Games – I noticed a couple, mostly cosmetic hiccups. Layout adheres to the gorgeous two-column full-color standard for Mummy’s Mask plug-ins and the pdf features several nice full-color pieces, though fans of LG may know some from other publications. The pdf comes fully bookmarked for your convenience.

First things first: This book is useful beyond the confines of the Mummy’s Mask AP. The respective past lives can literally fit within every context due to their nature, though they obviously do echo the themes of the AP. Michael Kortes’ system for past lives herein is a stroke of genius in my book. The abilities gained and the progression of their tricks really help making the PCs more involved in a given story and any player and GM worth their salt can draw bucket loads of inspiring, actual ROLEplaying from this book, while simultaneously reaping the rewards of engaging with the story on a deeper level. The totality of mechanical benefits, viable unique ability-choices (via feats) and well-crafted magical items make this come together as something that exceeds the sum of its parts. At a place in time where we have a vast array of mechanical options, one may easily forget that they ultimately should help carrying the story. As such, this supplement does an amazing job of making exploring the stories of the past lives featured herein rewarding and engaging for players and GMs alike.

I absolutely adore this pdf and while its minor hiccups are there, I can’t rate this the full 5 stars….but I *can* rate it 4.5 stars, round up and add my seal of approval.

As far as I’m concerned, this is absolutely amazing and I certainly hope we’ll get to see more past lives in the future. For my part, I am certain to expand upon the system presented – the concept is too compelling and neat not to. (As one final note: That unique feat you just stumbled over that no one knows? That unique ability that would change the dynamics of your game’s world and thus is banned? Tying that to a past life is a great way to say “yes” to a player asking for it, while curtailing its implications and maintaining in-game logic: “Of course none but the PC can do this – it is only due to being the reincarnated XYZ he can break the laws of magic this way!” Just sayin’!) Can I have more, please?

You can get this damn cool character-enhancer/roleplaiyng-catalyst here on OBS!