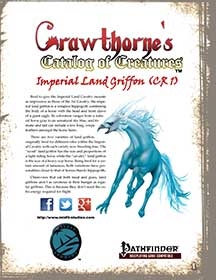 This installment of the Crawthorne’s Catalog of Creatures series clocks in at 5 pages – the front cover containing the header, creature artwork and the social media icons/homepage of misfit studios. The SRD takes up about 1.5 pages and the editorial is in a sidebar – to get all the material you thus have to print out the cover with the icons as well.

So, what is the land griffon? Well, according to the nice cover artwork they are basically non-airborne griffon with bird-like forelegs – as such, their carrying capacity is reduced – which is something I like. However, containing attribute modifications via class features, it would have been nice to get a formula here instead of absolute values – as written, you have to deduce new carrying capacity values yourself. The pdf does mention prices for young and fully trained ones as well as the eponymous Crawthorne’s commentary on the critter as well as two variants:

The Imperial Land Griffon (Scout) and the (cavalry)-breed – both are magical beasts that clock in at CR 1, with scouts excelling at Perception – +10 for 2 HD is nothing to snuff at. They are docile, though – but scout training leaves them with the attack, come, down, seek and track tricks. The creature also receives +2 to Survival to track prey with other griffons…which leaves me a bit puzzled how many of them you need to get that bonus. Does one suffice?

The cavalry griffon does not have the docile ability and thus gets primary natural claws to supplement the bite; default training-wise, they begin play with the attack, come, defend, down, guard and heel tricks. They are also trained to intimidate foes on command. Pretty nice: We get 3 relatively neat adventure ideas to use the critters herein.

Conclusion:
Editing and formatting are very good, I noticed no glitches. Layout adheres to the 2-column full-color standard of the series and while I’m not big on the social icons and dispersal of non-gaming parts through the pdf, from an aesthetic point of view, there is not much to complain about. The pdf comes with the classic Crawthorne-artwork as well as the land griffon artwork. Personally, I’m not a big fan of them being a stark blue, but the artwork does provide some cute eyes for the critters, which has the intended effect of “I want one!” on those susceptible to these notions. The pdf comes with a second, more printer-friendly iteration, which is nice to see. The book has no bookmarks, but needs none at this length.

Spike Y Jones’ imperial land griffons are a solid entry in the series and while I encountered some very minor ambiguities, I can’t really complain in that regard – the builds are focused and efficient and feel “right” – you know, none-too-smart magical beasts being focused on being efficient predators and the like. The absence of mount/animal companion stats, however, severely limits their use – they’re mounts and lack the convenient animal companion progression-info you’d need to use them as mounts…which is kind of a big deal and eliminates the main use you’d usually have for them. This leaves us with only the critter-use. In the end, this is not a bad installment, but it does shoot itself into its own foot. My final verdict will clock in at 2.5 stars, rounded up to 3.

You can get these critters here on OBS!