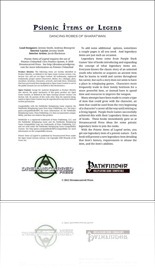 The third installment in the psionic items of legend-series from Dreamscarred Press is 5 pages long, 1 page editorial/introduction and 1 page SRD, leaving 3 pages for the dancing robes.

We start with a short introduction on the rules of legendary weapons, which means that these items scale in power with your PC’s levels and thus remain useful throughout their career. If you’re looking for more of these very cool items, check out Purple Duck Games’ excellent Legendary-series.

Now that’s out of the way, what are the dancing robes? Sharatwan was a dervish of unparalleled prowess who wore these robes not only in battle, but also when on her numerous diplomatic peace-missions, the robes working not only as a gorgeous gown that might be worn in higher social echelons, but also as a powerful enchanted padded armour that gains the new determination-quality (which casts breath of life 1/day when the wielder is dropped to 0 or fewer life) as well as multiple abilities that make the wielder faster, better suited for diplomatic missions and enhances their prowess in combat, especially with dual-wielding mind blades – which can btw. also be turned into pure lightning if neither the glowing hands or the aura of peace of the wielder suffices…

Editing and formatting are top-notch, though the last page of the write-up is rather empty – a tad bit more detailed fluff or a lore-table would have been nice to fill the blank space. Layout adheres to DSP’s 2-column standard, the pdf has no bookmarks, but needs none at this length and the artwork of the robes is nice indeed. Of all the psionic items released so far in the series, this one is my favourite, its abilities unique, its background history generic, yet intrigue-laden enough and best of all: It’s innovative. I can’t recall ever seeing a well-made write-up of a mere padded armour that would make for a tool a PC wants to use and the dancing robes actually fill that niche, setting the standard for future releases in the series higher. Due to the lack of a lore-table/wasted space, I’ll omit my seal of approval, but still remain with a definite recommendation and a final verdict of 5 stars.

Psionic Items of Legend: Dancing Robes of Sharatwan is available from: