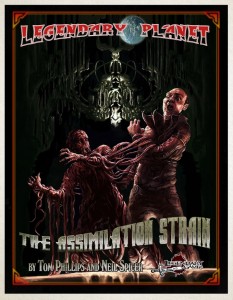 This was moved up on my queue at the request of my players.

The prologue-adventure for Legendary Games’ Sword and Planet-AP clocks in at 42 pages, 1 page front cover, 2 pages editorial, 1 page ToC, 1 page SRD, 2 pages of advertisement, 1 page inside of back cover, 1 page back cover, 1 page editorial introduction leaving us with 32 pages of content, so let’s take a look, shall we?

While this module is designed to act as a prequel for the massive Legendary Planet AP, it also easily works on its own. The following being a review of an adventure, the following does contain SPOILERS. Potential players should jump to the conclusion.

All right, still here? Whether to reclaim family property, at the behest of a seer or due to some other hook, the PCs find that their first journey has brought them to the otherwise pretty unremarkable village of Holver’s Ferry (fully mapped, btw.) – but even at the ferry leading into the town, across a swift river leading into lake Shimmermere – alas, the drunken ferryman has no good fate in store: While he tried to quarantine the village, he failed – and he is about to pay the price, as psychotic villagers hack him apart. Oh yes, enter the PCs. Unresponsive and clearly driven mad, the PCs have to defeat the bloodthirsty villagers in a thematic callback that made me remember Resident Evil 4 – in all the right ways. Crossing the river one way or another, the impression that Holver’s Ferry has been hit by some tragedy pretty much becomes apparent.

A sense of apocalyptic dread, piece by piece, encounter by encounter, will slowly seep into the consciousness of PCs and players alike, as a depressed widow endeavors to commit suicide, as they explore abandoned houses that look like their inhabitants have simply evaporated – something is odd. Hanged people dangle from the town’s sacred oak and child survivors hide from anyone out there. The local inn shows signs of struggle, of desperate defense – and a man who had locked himself in, now just as bloodthirsty and dangerous as the first farmers encounetred. Things have become so bad that even goblinoids have entered the village. The priest is insane and burning undead can be found among the village’s houses – a sense of grim doom has come to Holver’s Ferry, and as the PCs find the halfling berserker (berserker Zimm – boy did I laugh when reading that one!), the gnome apothecary who retained his wits or draw the conclusions due to the hints left in the sheriff’s office – the dread mystery needs to be solved.

This sandboxy horror section is well-presented and offer multiple means to draw the PCs further into the topics, whereafter the trail leads towards the Orphanage of mother Oddle. You see, what has happened here is an unlikely and far-out scenario: An invader from another world has engineered a mind-reprogramming bio weapon, the eponymous assimilation strain. Alas, the targeted viral strain’s first iteration proved to yield a temporary, highly infectious burn-out rate and chaotic, terrible symptoms – the ones the PCs have witnessed firsthand in the horror at the town. The dread invader, a vanguard of the planned invasion, has since perfected a better strain of the virus and infected one powerful lumberjack, Silam Oddle – controlled by a disgusting, black tumor-like lump at the back of his neck, the PCs can save him, yes – but perhaps they have to take the poor man down. Beyond that, have I mentioned that his mother’s mummified remains still remain in her room? Yes, creepy.

Rexel, the gnome alchemist, in the meanwhile, has probably gone missing, abducted by an adherer made from the remains of the town’s erstwhile, missing sheriff. The trail leads towards Arvarenhode Manor’s ruins, where the catacombs await under the rubble – provided the PCs can best the deadly creatures inhabiting the upper part of the ruins. In the catacombs, the PCs may save Rexel, battle the adherer and navigate a complex inhabited by a cool, uncommon selection of adversaries, with thematically-awesome descriptions and rooms. Finally, defeating the xoraphond creature behind the dread conflict ends the jagladine empire’s invasion plan, while also providing a first taste of the things to come. The pdf concludes with alien technology (Technology Guide-compatible) and the new creature and two templates provided.

Editing and formatting are top-notch – the book has been further streamlined from its original inception. Layout adheres to a beautiful two-column standard that is still pretty printer-friendly, with copious amounts of full-color high-quality artworks for each major player in the storyline. It should also be noted that the layout does not try to generate more pages by wide margins – there is a lot of information on each page, making the module more detailed and longer than you’d expect from most modules of this page-count – in my playtest, it took my exceedingly fast group 2 sessions to clear this module. About 90% of 32-page modules tend to be finished in 1 session, so yeah – quite a bunch of content. Cartography is beautiful and plentiful – and a massive art and map folio constitutes a huge array of handouts and options to directly show your players the maps or cut them up and use them as handouts. I hate being a complaining whiner, but one thing does become obvious with this art and map folio, though: A tad bit higher resolutions would have been appreciated for the maps etc. – you can see some pixels. On the plus-side, the print version does not suffer from these minor hiccups. The adventure comes fully bookmarked for your convenience.

Tom Phillips has, slowly but surely, become one of my go-to authors regarding any scenario that provides horror, challenge and mystery – he knows his craft. Add Neil Spicer and the duo has created one awesome, damn cool low-level module that is challenging, potentially a bit disturbing and interesting. With a diverse, uncommon array of enemies that never falls into the bland 1st level routines, a mix of sandbox and dungeon-exploration, this module provides quite a bunch of cool ideas. The best component of this module, to me, is a more ephemeral one, though: The pacing of this module is impeccable. Horror and mystery, both as genres, hinge on timing and means of creating suspense, of build-ups and gradual escalation -and this module gets this component perfectly.

As a GM, you can obviously just spoon-feed the information to your PCs via various proxies, but not only are there multiple ways of unearthing the truth, there are several red herrings – and in my playtest, I kept as much information as possible opaque, making my players draw the conclusions themselves. Now if the players get stumped, you still have several means of putting them on track within the logic of the module. Furthermore, the module has ample instances wherein heroes can be heroes and actually save lives – an approach I always welcome in modules.

I honestly did not expect the prologue to Legendary Planet to be a mystery, much less one that is this good; whether played for weirdness or downright horror, this module makes clear from the get-go that it’s not your standard fantasy fare. But only in hindsight. As a piece of advice: Don’t tell your players necessarily that this will be a sword & planet module. There are several themes that make for delightful red herrings in the hands of a capable GM, making the realization of what is truly going on have even more of an impact.

The assimilation strain is an excellent module and a furious first in the series, one that makes me very happy I’ve been able to back the kickstarter. With great production values and content that must be considered awesome, this module is a great way to kick off the AP, one that has me stoked to see what’s in store for us. My final verdict will clock in at 5 stars + seal of approval.

You can now get this module here on OBS and here on d20pfsrd.com’s shop!