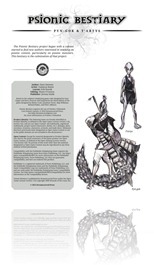 The latest installment of the Psionic Bestiary-subscription from Dreamscarred Press is 4 pages long, 1 page front cover/editorial, 1 page SRD, leaving two pages for the creatures, so let’s check them out!

The first new creature would be the Pyn-Gok (CR 3), a race of regal avian humanoids with the power to bat foes around with id insinuation and masters of polearm-combat. Rather disturbing, actually, that the beautiful b/w-artwork makes the Pyn-gok actually look cool and badass! I think these will see some use in my game!

The second new creature is the T’artys (CR 5), a type of psionic fey that delights in causing mischief and dissent among humanoids via its psionic and spell-like abilities, while looking like a pearly version of grey men. Their artwork unfortunately does not hold up to the Pyn-Gok’s, but their signature ability, which disrupts manifesting and spellcasting is nice.

Editing and formatting are not perfect: I noticed a couple of minor glitches ranging from a missing preposition to capital “b”s after feats that should be superscript etc. – all in all quite a bunch of glitches that need to be addressed, especially in such a short pdf. Layout adheres to DSP’s 2-column standard, is b/w and rather printer-friendly. The pdf has no bookmarks, but needs none at this length. Artworks range from good to ok. The creatures are nice, but the artwork drags down the T’artys as much as it elevates the Pyn-Gok. Also, the latter feels oddly generic in its fluff: Yet another mischievous fey, only this time with psionics? Not very exciting.

The T’artys should get some unique identity beyond sowing mischief, especially since it’s a fey and thus should have some kind, any really, association with nature/elements/people- something that makes it feel mystical rather than mundane. I also don’t get why the Pyn-Gok don’t get some peacock-like abilities that blind/dazzle/fascinate foes – the connection is so obvious and the race could use a second signature ability.

All in all, I feel that this is the weakest offering of the subscription so far. My final verdict will be 2.5 stars, rounded down to 2 for the purpose of this platform.