Call to Arms: Bracers of Armor

Call to Arms: Bracers of Armor 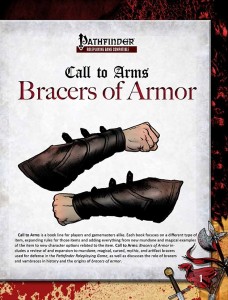 We begin this smaller installment of the Call to Arms-series with a brief summary of bracers versus vambraces in the context of both reality and the game system, including a brief history of bracers in game. The pdf then goes on to provide a new mundane item, the archery bracers, which make sense from a simulationalist position – seeing how the bowstring may hit the unprotected string, lack of bracers can be translated to a penalty to subsequent attack. This btw. also makes for a nice balance-tweak regarding the power of ranged bow characters. The second item would be armored vambraces, which defines them and acknowledges that they’re already part of most armor.

As far as magical bracers are considered, the bracers come in steps from +1 to +8, allowing for significant protection, while also sporting concise rules to prevent abuse via low-cost additions. While I get the intention of why the bonus scales to +8, at the same point, I do believe the usual +5 cap for the pure bonus, with exceeding power requiring the addition of special qualities, should apply to the bracers to retain system-consistency, in spite of the restricted list of special qualities. On the other hand, I get the intent of scaling up to +8…it’s a difficult decision there, one that ultimately boils down to personal taste and design-aesthetics – whether you value system-consistency or balanced defense options for agile characters more. EDIT: Since one of my readers commented on this, let me apologize for not being clearer here: Yes, I am aware that the default rules sport exactly the bonuses from +1 to +8 and that this is basically a reprint. I consider this component one of the slightly more awkward choices of the base system. My intention here was to highlight this inconsistency of the rules, but not bash this book for it, which is why I  wrote that this ultimately boils down to personal taste and design aesthetics – both of which do mean that they do not factor into the final verdict. Thanks to Sayt for pointing out that this needed some further elaboration!

The pdf hereafter goes on to present 15 specific magic bracers of armor, though most of these come in a variety of different power – between +1 and +8 equivalent. There are bracers with visible force-fields that help intimidation…and then, the bracers become more interesting: Bracers of the Deep Sea help against Deep Sea pressure in addition to their magic protection, while chainmail bracers duplicate…well, the effects of chainmail. There are a couple of these type of bracers herein. Comfortable bracers add endure elements and demi-gauntlets work in conjunction with gloves and there also is a samurai-themed variety of the bracers of the armored knight.

Wrist-slot bracers scale up to +5 and are more interesting, providing DR versus ranged attacks as well as providing a swift action 1/day true strike. Another vambrace allows for the 1/round reduction of off-hand penalties and there also is one that upgrades the protection judgment as well as two linked pairs of vambraces that allows for the transfer of damage from one pair to the other, at the expense of temporarily decreasing bonuses. There is also a pair of vambraces that 1/day allows the wearer to deflect missiles. Two nasty cursed bracers can also be found herein and “The Shield and The Sword” are eternally quibbling bracers, sporting an inverted defending benefit, while the sword’s ego thirsts for attacks, for retribution, tied to the armor-bonus conversion. Intriguing!

The pdf also provides two mythic bracers, the first of which are paired and allow for short-range teleportation, which thereafter sends the wearer back to his or her square. The second pair increases armor bonus by tier for the expenditure of mythic power and you may extend this bonus to other creatures as a standard action instead of as the item’s usual swift action activation. The pdf concludes with a powerful defensive artifact.

Lucus Palosaari’s bracers are a briefer CtA-installment and they manage to begin with interesting ideas, the optional rules for archer-bracers, e.g., making for a cool rules-addition for low fantasy. That being said…and as much as I’m loathe to say it…this installment, is comparatively uninspired. Sure, the bracers duplicating different armors make sense…and yes, I like the fluff-change of bracers – but when compared to e.g. the fireworks book, the options provided herein simply…aren’t as evocative, as unique. In fact, the magic armor-bracers may have great fluff, but rules-wise, they are not that intriguing. Now granted, this is an inexpensive book compared to the last huge CtA-installments…but ultimately, it also feels like it doesn’t reach even half as far. In the intelligent item, one can see a bit of the playful precision with which he usually puts out those unique concepts and stitches holes in the rules…but apart from them, this pdf felt like a solid one…but one, which, in direct comparison to e.g. the firework book, fell flat of its own premise.

Particularly in such a short book, armor-duplicates could have used unique additional benefits each; reskins could have used modification and diverging rules. This is not a bad pdf, far from it…but it falls short of the usual brilliance the series has continued to build on. You won’t be disappointed by this book, but neither will you be blown away – hence, my final verdict will clock in at 3.5 stars, rounded down to 3 for a solid, if not perfect installment of the series. If you’re new to Call to Arms, I’d rather recommend the book on fireworks or torches and flames (or the glorious one on ropes!) to properly depict what the series can offer.

You can get this book on bracers here on OBS!