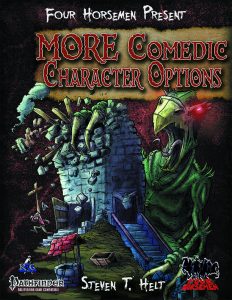 This installment of the Four Horsemen present-series clocks in at 16 pages, 1 page front cover, 1 page editorial, 1 page SRD, leaving us with 13 pages, so let’s take a look!

All righty, after a brief introduction, we are introduced to the Comedium (that’s a groaner that could have come from yours truly…), which does not gain the regular archetypical spirits (unless otherwise gained) and instead gains the Comedian, whose séance bonus would be +1 to Bluff, intimidate and Diplomacy. The Influence penalty, unsurprisingly, would be applied to Charisma and Charisma-related checks…oh, and guess what, auto-confirm of ranged or melee attacks. As taboos, you choose to either have to include one joke per conversation, one pun per sentence or respond to criticism with an insult. The lesser ability would be mirth, which reduces penalties incurred from mind-affecting abilities for yourself and allies within 30 ft. by 1. The intermediate ability would be Punch Lines: As a move action, the comedium can allow the comedian to gain 1 influence over him, partially manifesting: This nets the character a Perform (comedy) check against a creature in reach, adding the spirit bonus to the check. If the check exceeds 10 + the creature’s CR + the creature’s Wisdom modifier, the critter loses its Dex-bonus to AC due to being entertained by the spirit. Internal game-logic-wise, I think this probably should be mind-influencing, at least.

The greater ability lets you influence the attitude of crowds and the supreme ability lets you counter language-dependent or verbal component using spells as an immediate action: You roll Intimidate and compare it to either the spell save DC or 10 + the target’s Charisma modifier or the skill-check’s result, rendering the target shaken for 1 round on a success. The ability btw. has a 24-hour cooldown per target, not unlike a hex. 13th level replaces haunt channeler with +2 to Will saves for allies participating in a séance. Instead of astral journey, the archetype can tell a funny joke, affecting targets within 10 ft. per level (not class level) with hideous laughter on a failed save. Minor complaints: Spell-reference not italicized. Also: It’d make sense for this to have a daily limit/hex caveat. The ability also does not specify its activation action – while Su usually defaults to standard action, I’d still have appreciated a stated action.

Doorkicker barbarians gain proficiency with simple and martial weapons, light armor, shields and tower shields and replace fast movement with double land speed in the surprise round. Trap sense is replaced with a scaling bonus to “initiative checks and during the surprise round and first round of combat” – something is wonky here. Does that mean only in those two rounds? Or should the bonus apply to something? No idea. 7th level replaces DR with the option to carry broken down doors or gates as impromptu weapons with the option to perform bull rushes and shield bash attacks with a bonus to atk and CMB with it that increases. Okay, as what type of shield do these impromptu shields count? Do they grant an AC-bonus? No idea.

Forest friend druids replace nature’s bond and resist nature’s lure with Tiny and Diminutive forest critters, Disney-style, that allow the character to perform a Dirty Trick with a reach of 30 ft. as a free action, using Cha instead of the animal’s Strength score and druid level instead of BAB. 4th level provides a +2 bonus, 10th level the option to execute two such attempts at once. The character can’t use animal empathy to influence magic beasts or domestic cats (wild ones are more grateful…) and 4th level replaces standard wild shape with critter shape, sounding like a cute child hopped on helium while speaking in critter form, with -1 to CL and -4 to Diplomacy and Intimidate while in cute critter form. First, the druid can only go Tiny, with 6th level unlocking Small and Medium versions of such Tiny critters. Additionally, damage increases as though one size larger. Every 2 further levels increase the maximum size available by +2, capping at 12th level and Gargantuan. 9th level yields immunity to natural diseases instead of venom immunity and 13th level provides a -2 penalty to concentration for enemies only while nearby the character. Pretty cool!

The cavalier order of the destrier grants bonuses to atk and damage to the horse with his challenge (meta-joke: Low-level horses are deadlier than their riders…) and adds both Acrobatics and Stealth to class skills, with the mount automatically gaining ranks in them upon gaining HD, and both share the highest Dex-score for Dexterity –based checks. At 2nd level, penalties for ranged attacks are reduced by 2 and no longer takes concentration penalties for vigorous motion. The mount no longer takes atk penalties for squeezing. 8th level nets +4 to CMD versus unseating attempts and Defensive Combat Training for the mount, as well as +2 to CMD. 15th level yields Ride or Die: 1/round, the mount can increase its reach as a swift action, for one round. He also may parry AoOs as an immediate action. Yep, this is “every cavalier joke ever” – the archetype.

Master of Disaster monks add Study Stance at 1st level, Missed Me at 6th and One gender-Neutral Army (lol) at 10th level to bonus feats available. 2nd level nets +2 to Acrobatics, Swim and Climb as well as Reflex Saves and Constitution checks, increasing that to +4 at 9th level, replacing evasion and its improved brother. 4th level replaces slow fall with mastery of cover: Increased benefits for the monk, decreased benefits for his adversaries. 7th level provides Superior Style: as a standard action, the monk can enlighten his audience regarding the superiority of his school, technique, sensei’s teachings, etc. – he may forego an attack made at his lowest attack bonus in favor of using an AoO to parry an opponent’s attack, with 12th level allowing for the use of two such attacks for parries. This replaces wholeness of body and abundant step…and is WEIRD. As a standard action, it does not allow for a full-attack in that round, so is it immediately active, drawing on the attacks in a future round? Does it only activate upon taking the next full attack? The lack of a duration and clear sequence make this problematic.

The revelry mystery for the oracle, which nets Bluff, Knowledge (nobility), Perform (act) and Sleight of Hand as class skills. The bonus spells make sense (and contain an asterisk-based, pretty funny joke with the reader). The revelations are pretty cool: Out-of-combat, limited use condition negation, conjuring forth a friendly, cheering crowd (which misses the chance for cool Performance combat synergy, alas), adjusting after botching social skill checks, limited healing of allies, Party trick SPs (that scale up to frickin’ meteor swarm at 19th level), conjuring forth blocking piñatas, verbal roasting of foes – pretty cool general array of tricks…though I’m not a fan of all: Untyped damage via touch-attack tickling, for example, comes also with a no-save staggered condition. Its 11th level minimum does alleviate that a bit, but still. The capstone summons a bad rave that wrecks concentration and conceals allies – cool!

The stoner alchemist replaces mutagens and persisted mutagens with getting high, for +2 to Str, Dex and Con and +2 to Will-saves, but – 2 to initiative and Reflex saves. It lasts for one hours per level (should probably be class level) and takes 10 minutes to activate. While buzzed, the stoner can exhale 5ft.-cones of smoke into adjacent squares, potentially dazzling targets on a failed save for 2 rounds. 3rd level and every 4 levels thereafter increase the options available for second-hand smoke. 5th level and every 4 levels thereafter increase the area affected by this second-hand smoke by +5 ft. and the ability, replacing bombs, can be used Intelligence modifier + class level times per day. 2nd level replaces the poison resistance and immunity with a scaling bonus to saves versus pain effects and those that induce a variety of conditions.

The pdf contains 7 new feats: Awful Good lets Lawful good casters ignore [evil] descriptors of spells at +1 spell slot level…and it should probably have the metamagic tag. Dodecaswap lets you replace 2d6 with 1d12 +1. …get it? Light Armor nets you a dodge bonus to AC equal to Charisma modifier, but only versus targets attracted to you. Mascot nets you a +1 bonus to atk, Will-saves and damage when an animal companion/mount/familiar damages a foe, Missed Me nets you a dodge bonus when flanked – if a foe misses you due to this bonus, he may strike his ally. One Person Army (previously referred to as One Gender-Neutral Army) lets you make AoOs against any square you threaten while charging, but you’re still limited to one AoO per threatened square you moved through. Someone has seen Lightning’s signature move in FF XIII. Study Stance lets you use Sense Motive to identify style feats, with attacks based on identified style feats potentially causing AoOs. Also nets you +1 to CMB and CMD while in the same style as your opponent.

The pdf’s final section is taken up by 10 new spells: Baleful plushy transforms animals and magical beasts into animated plushy versions, hampering AC and natural attacks. Power Word: Die creates a polyhedral die that moves towards your target. Distracting dance fascinates targets. Dodecaheathen deals d12-based damage, particularly if the target’s alignment is further from yours! Fire flowers creates bubbles of energy (one for each base type), causing some serious damage and potentially hampering the foe. Mist me is an immediate action concealment-granting spell, potentially hitting foes behind you. Nature’s furry enhances Diminutive or Tiny critters with brutal power. Plush companion temporarily makes companions etc. plushies…and harmless. After the spell elapses, the creature regains hit points. Squirrel cheeks, aka hamster cheeks, net you an extradimensional space in your cheeks. Walking Bomb makes Tiny or smaller alchemical items mobile, allowing you to command them. Descriptors featured here include [hug] and [pretty]. XD

Editing and formatting are very good on a formal level. On a rules-language level, the material is similarly good, though not as good as usual for Four Horsemen books. Layout adheres to Rogue Genius Games’ two-column full-color standard for the series and the pdf comes with nice full-color artworks. The pdf is fully bookmarked for your convenience.

Steven T. Helt’s second array of comedic character options has some evocative, cool concepts – and it’s genuinely funny here and there. The options are, as a whole, solid, often interesting and don’t settle for common tricks. At the same time, I honestly wasn’t as blown away as I was by his first array of funny options from a player’s side – there is no radical change of playstyle herein. The content is by no means bad, but neither did it absolutely blow me away. The minor glitches also hurt the pdf a bit. In the end, this, to me, remains a mixed bag, definitely on the positive side, and hence my final verdict will clock in at 3.5 stars, rounded up for the purpose of this platform.