With a Bullet Point: 6 New Exotic and Martial Swords 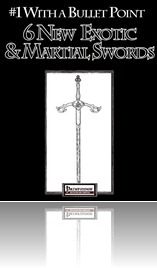 On the martial weapon-side, we get the Cinqueda, which is a light, dagger-like martial melee-weapon with a wide threat-range, while the executioner-sword is a two-handed melee weapon that offers d10 damage and a whopping x4 crit-modifier and increases the coup-de-grace DCs performed with it, but doesn’t get any bonuses from charge attacks – interesting way of balancing a weapon!

The Estoc may be known to more people out there and can be used as either a mounted, one-handed sword or as a two-handed weapon for infantry and it can be used for “brace”. Mechanics-wise, it is an uncommon weapon, coming with a base-damage of 1d6+1d4 and a crit range of x3.

The Kampilan can be considered to have the disarm, sunder and trip qualities and deals 1d8 at 19-20, balancing this superiority with a penalty of -2 when trying to wield it as a two-handed weapon.

The Manople is essentially the sword-like version of a punching dagger, complete with gauntlet, but makes it hard for the respective adversaries to disarm the wielder. While the weapon can’t be quick-drawn, it can be used to add x1.5 the Str-mod as if it was a two-handed weapon, but only as a primary weapon.

The final blade, the swordstaff, is an exotic, two-handed reach weapon that can be used as brace and also be used as a non-reach weapon, albeit at a penalty.

Editing is top-notch, I didn’t notice any glitches. Formatting sports a minor inconsistency, though: The header “One-handed melee weapons” in the section n exotic weapons is centred instead of oriented left as in the other rows and columns. Layout adheres to SGG’s printer-friendly 3-column standard and the pdf has no bookmarks, but needs none at this length. As with other bullet points, this pdf delivers what it promises and I really like the design-choice to limit the usage of the executioner’s sword and that some of the weapons use penalties on specific manoeuvres etc. I honestly would have enjoyed it if the other weapons used similar mechanics. The Manople’s synergy with power attack etc. is also rather interesting and generally, I did enjoy the content – however, when directly compared to other BPs, I can’t help but feel that this pdf is good, but falls short of excellence: Two more blades, perhaps, or more of the unique mechanics would have been nice. That being, said, this BP is still a good purchase and I like the design-impulses (1d4+1d4 base-damage! Balancing weapons with restrictions…) this pdf offers. Thus, I’ll settle for a final verdict of 4 stars.

With a Bullet Point: 6 New Exotic and Martial Swords is available from: