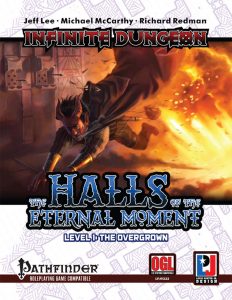 The first level of The Halls of the Eternal Moment clocks in at 17 pages, 1 page front cover, 1 page editorial, 1 page advertisement, 1 page SRD, leaving us with 13 pages of content, so let’s take a look!

This level has been claimed as a home by the druid circle of the ages – and as such, we have a nature-theme on our hands here. The pdf notes walls, ceilings, etc. and also provides notes for wandering monsters, simulating a kind of organic and dynamic environment. Each of the rooms comes with read-aloud text, which can help GMs less confident in their improvisation skills.

So far, so good, so let’s go into SPOILER-territory. Potential players should jump to the conclusion.

All righty, only GMs around? Great! So, the monsters that constitute the major inhabitants would be leaf leshies, giant caterpillars and headless, fungal zombies held together by dark magics – somewhat annoying – their SQs etc. have not been reprinted in their statblock, meaning that you’ll have to look these up. Each of the rooms does have something to do – a skill to use, a hazard like poisonous vines. Specially planted trees that hamper movement and creative traps, including organic responses by the creatures herein make for an overall interesting dungeon – and a hard one. There are traps here that WILL insta-gib a PC – 6d6 smashing stones into which you may run due to being stricken with fear by a magic pool – this is not a dungeon for noobs.

Indeed, the lack of a maximum value of inhabitants in the monster-placement for cleared rooms etc. means that rest etc. can be a much sought-after commodity – and personally, I applaud that. I do not applaud the boss fight versus a spirit, who animates a fungus leshy, who governs the respawns of leshies – not because I don’t like the boss fight, but because the animating druid spirit is not really covered – killing the fungus leshy ends the influence of the spirit, which is weird to see in a game so steeped with ways to deal with spirits and the like.

Okay, admittedly, I’m stalling. You see, the main draw, to me, for the dungeon is its fluid, erratic time – I said as much in my review of the prologue. And yes, temporal weirdness can be found here. In the dressing. And as a justification for the critters showing up. Do you need temporal tricks to navigate a room? No. Do you get to solve time-based puzzles? No. Are there special ramifications for certain areas? No. The execution of the amazing leitmotif falls flat for me. The dungeon-level is wondrous, yes, but it does not come close to fulfilling the promising theme.

There is another aspect where the pdf does not reach the levels I hoped for: The map. While it comes with a keyless version and while it’s in color, it just shows the rooms. Secret doors are not redacted and neither terrain feature, not traps are noted on either map, making their use rather annoying – basically, you have to print them out and fill them in yourself. Don’t get me wrong – I don’t need gorgeous maps – but I’d like to at least have maps that note the basics.

Editing and formatting are good – I didn’t notice a big accumulation of glitches, but some formatting decisions/requirements to look things up are a bit questionable. Layout adheres to a really nice two-column full-color standard and the pdf sports solid stock artwork. The pdf comes fully bookmarked for your convenience. Cartography is worse than in pretty much every comparable dungeon, providing just blank and empty rooms – the work required here by the GM represents a serious comfort detriment.

Jeff Lee, Michael McCarthy, Rich Redman and Louis Porter Jr. have per se written a cool dungeon-level here. The leshy-theme is cool and hasn’t been done to death and the hazards and traps are deadly, challenging and fun. That being said, this pdf falters in the details – it is, most of all, inconvenient. You have to look a lot up; you have to basically fill in the maps to render them operational. One of the rooms notes “Don’t go down the Well” as a header and reference to Rappan Athuk – referencing a superior book may not have been the smartest move here. You see, the dungeon, let me make that abundantly clear, is NICE. The rooms are varied and interesting. At the same time, it is VERY inconvenient to use. I have had an easier time using OSR or 5e-dungeons in PFRPG than with this one, courtesy of a couple of really unfortunate decisions and the cartography being this incomplete. A wholly barebones dungeon. No chairs. No landmarks. No secret door “S”; no trees. I don’t get it and I have never seen anything like it, not even in really rudimentary DIY-supplements.

My disappointment regarding the unrealized temporal angle notwithstanding, this would be a worthwhile dungeon, were it not for these inconveniences. As written, I can’t go higher than 3 stars for it, stars earned solely earned by the good ideas that are herein and the quality of the writing. Let’s hope level 2 fares better…

You can get this dungeon level here on OBS!

You can get the bundle of the first 4 levels here on OBS!