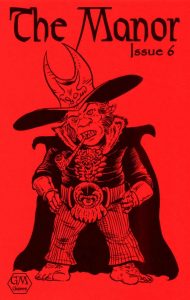 The sixth installment of the OSR-zine „The Manor“ clocks in at 28 pages, 1 page front cover, 1 page editorial, 1 page introduction, 1 page advertisement, leaving us with 24 pages of content, so let’s take a look!

It should be noted that the editorial sports a content-warning this time around – this issue of “The Manor” deals with mature topics – not in an explicit manner, mind you, but enough to offend some people. If you’re particularly prude regarding depictions of sexuality, you may take offense regarding the one picture herein of a spider/lady hybrid, which features exposed boobs.

The issue includes a new class designed primarily for NPCs – this would be the guard, who represents the watchmen. Prime Attribute would be Strength (5% bonus on Str 13+) and the class permits all weapons and armor as well as shields and does not have any racial restrictions. The guard gets d8 HD up until 9th level, with a ½ to hit progression. Saves progress from 17 to 9. Guards get +1 to “detection rolls” to notice things out of place, which increases to +2 at 5th level. Okay, I may be slightly weird here, but there are, Raw, no rules for detection rolls in S&W, which makes this one weird. 2nd level yields the option to 1/day interrogate someone over 1d6 turns. 3rd level provides +1 to AC when flanking – if both characters flanking are guards, they get +2 to AC. At 7th level, the guard gets +2 to saves vs. effects that would result in fleeing from battle, and he gets +2 to reaction rolls with creatures that appreciate his dedication. 9th level lets the guard declare that he’ll defend a target, object, etc. to the death before battle begins. Once declared, the guard cannot withdraw, but gains +1 to hit, attack and AC. He’ll also continue fighting at 0 hp, only dying upon reaching the death threshold. (Note: This assumes that you use the optional rule, whereby a character only dies upon reaching negative level in hp, as noted on pg. 43 in S&W.)

Okay, I’m not particularly impressed by the guard. However, I did like the rather nice 20 different guard greetings that are included in the pdf, providing a nice introduction to a given settlement, as well as angles for the PCs to be shunted into modules.

The second article herein that is not a module is “Getting from Point A to Point B” by Ken Harrison – basically, we get small, mapped rooms that act as a transportation devices. We get basically a Futurama-tube, a pool with grate and shark zombies (Yes!) and a really cool one, where an Ourouboros animates, uncoils and eats the PCs, only to vomit them back out in room #2. Cool little article and easy to implement, regardless of system, dungeon, etc.

Now, the majority of the module is taken up by one location/adventure and a secod adventure, both of which have a very strong dark fantasy vibe – The first of these would be Matt Jackson’s “The Brothel at Wargumn”, which may act as both a dangerous set-piece locale to insert into e.g. a PC investigation…or it may be run as a straight “close the place down” murderhobo-ing exercise, though the latter will probably deprive it of much of its impact. The area comes with a nice and pretty detailed b/w-map, though we don’t get a player-friendly version of it, which is a bit of a pity. The map also sports no grid, which makes judging distances somewhat harder than it needs to be. Okay, this is about as deep as I can go into this without SPOILERS. Potential players should jump ahead to the conclusion.

All right, only GMs around? Great! So, what makes this brothel special? Well, it caters to…let’s say…”exquisite” tastes – it features uncommon prostitute-choices and caters to the decadent ruling class. Here, you can find anything, from goblins to lamia, doppelgängers and succubi…or even ghouls. As such, this clandestine club is led by a thoroughly nasty gentleman named Grunfeld, who controls his employees with a magic item that controls the slave-braces of his “employees” – he and his homunculus are also supported by guards, and the complex is “realistic” in that it has different rooms as well as a latrine of sorts. The premise is simple, but rather effective: From misguided loves to sheer decadence, there are quite a few ways to effectively use the location in your game. I rather enjoyed the location.

The adventure penned by Tim Shorts herein is one of my favorites regarding what I’ve covered so far from his modules – designated as a low-level adventure, “Witches of the Dark Moon” has a rather distinct dark fantasy vibe and manages to evoke a concise atmosphere. The adventure locale is once more mapped, though the map does not sport a grid or a player-friendly version. I’d suggest it for characters level 1 – 2, though it will be very deadly at first level. Still, atmosphere-wise, I think this fits the module. It should be noted that, unlike the “Brothel at Wargumn”, the stats here only feature ascending AC-values, no descending ones.

The adventure begins with a really nice piece of prose, wherein the bodies of two kids, gruesomely sacrificed, are found – and two more kids are missing. The bodies found were marked with the symbol of Noctrina, the Night Mother, goddess of witches. (Alternatively, when played in e.g. the Lost Lands, substitute Hecate). The culprits have taken refuge in the ruins of the old hill fort. The interesting aspect here would be that this actually can be solved pretty quickly – the outhouse contains a tunnel, leading to where the missing kids are kept, and there is a secret room with an altar that contains a deadly spider-monster – destroying the altar will make the witch-incursions cease…but chances are pretty high that this alone will not suffice for good PCs, considering the macabre things they can find – slain animals, spell slot-restoring wine made from the blood of innocents…these guys are EVIL. The savage and vile nature of this place is also mirrored in the interesting “alarm”-mechanisms, for example. Screaming spiders, a nasty guy that uses Tim Brannan’s witch class (can be run without referencing the class), spiders that can turn you into werespiders…and there is “Aria, the Handmaiden – a witch/werespider who gets a signature spell (and the aforementioned image that features boobs) and is deadly. There is a severed head, the Head of Mundi, among her possessions, which can store Viz. First introduced in “Knowledge Illuminates”, this is a substance that allows you to replenish expended spell slots – I am not a fan of the ramifications here. That being said, it’s easy enough to make it just charges that can’t be recovered. Slightly annoying: The item’s properties are noted in the regular text, not in their own boxed text or Aria’s write-up, which is a bit odd. The new spell, fast web, targets a smaller area than web and is a level higher. Here’s a problem: You can only break free with a “Might roll.” I assume this to be, in OSRIC’s parlance, for example, a “Major Test” or a bend bars roll, if you’re so inclined. Still, rules-language wise, this could be a bit tighter. Anyways, the horror does not stop there – Ariana has actually impregnated her daughter with horrific spider-things that will soon burst forth from her, unless she is cured. Though being a “vessel” is an honor for her. Yeah, she needs some serious, professional help…

Editing and formatting on a formal level are good, with a few minor typos here and there, like “-ed” missing, etc. On a rules-language level, the installment could be more precise. Once you take a look at the details, it feels a bit rough here and there. Layout adheres to a 1-column b/w-standard, is printer-friendly and nice. The cartography is neat and detailed, but I wish we got key-less, player-friendly versions. The pdf comes fully bookmarked for your convenience. The art by Jason Sholtis, Dylan Hartwell and William McAusland is original and rather neat, particularly considering the more than fair, low price-point.

Tim Shorts, Ken Harrison and Matt Jackson deliver a rather nice installment of this ‘zine. The two big articles in this one, i.e. the location and the adventure, both are really nice offerings that should provide some serious fun at the table, particularly for groups inclined towards darker shades of fantasy. The supplemental articles are nice as well, though the guard class per se did not impress me. The same can be said about the details regarding some of the rules, which suffer from the assumptions of a particular constellation of homebrewed rules-components. While easily hackable, I maintain that adherence to a single system would have decreased the potential for potential snafus at the table. As such, in spite of really liking a lot about this issue, my final verdict cannot exceed 4 stars.