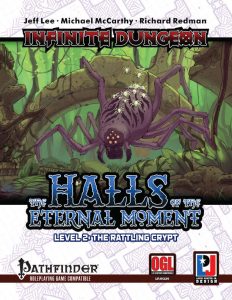 The second level of the Halls of the Eternal Moment clocks in at 17 pages, 1 page front cover, 1 page editorial, 1 page of SRD, leaving us with 14 pages of content, so let’s take a look!

Okay, we begin this installment with a brief summary of the opposition and a nice d20-dressing table that sports descriptive hooks and concrete items, for a total of 40 entries – nice and adds a sense of consistency to the level and the adversaries – kudos there!

As before, we get helpful information on floors, walls…and slender pillars, which *almost* take up a square – destroying these can cause a ceiling to collapse (Okay, how much squares? The whole room? Whole dungeon?) and in some cases, they are connected by iron chains. Both these and decorative copper chains mentioned come with proper stats – so as far as general features goes, this is a step up from level 1.

All right, only GMs around? Great! If the name of this level wasn’t ample clue – undead would be the leitmotif of this level of the Halls of the Eternal Moment…and they are organized. Under the leadership of the ghast Benivuul and his ghoul lackeys, the roaming skeletons and zombies make for a persistent and dangerous threat. Camping is impossible, with each hour and each campaign attempt resulting in a random encounter – on the plus-side, this level can actually be emptied of the scouring undead, though leaving for too long sees other things move in…Nice: the nature of this second cadre is briefly discussed.

The level kicks off with a sliding staircase trap and foreboding graffiti can be found throughout the level, adding a special sense of gravitas to the whole proceedings. Trapped, evil altars and concealment-granting cob-webbed sheets and an evil altar used for undead creation, cacophonous traps – the undead in the level are keenly aware of the traps and make good use of this gauntlet, which plays significantly better than its vanilla premise would lead you to believe. While it’s a bit strange that room 22’s text refers back to room 22 for a patreon goal. Some passages/secret doors lead to patreon goal rooms and are not included in the pdf.

As a whole, I enjoyed this level more than the previous one – though personally, I would have made even more use of the slender pillars – they are a unique architectural feature that could have yielded some interesting additional options regarding 3D-combat, pits, etc. Their rules-language could be slightly more precise, but oh well. More significant: Apart from the traps, all adversaries herein are painfully vanilla – don’t expect archetype’d, templated or class level’d foes herein – standard critters.

Speaking of which: If you hoped, like I did, that the temporal angle and the potential for cool shenanigans with undead (like in several OSR modules) and traps, I’ll have to disappoint you – the leitmotif of the dungeon remains a backdrop at best.

Now the maps, while still very bare-bones, do sport icons for the pillars, which is nice. Icons for altars etc. are also provided and while the maps are anything but nice to look at, they are a bit better than those in level 1. Slightly annoying: Secret doors are not designated as such on the GM map and on the player’s map, they have not been redacted.

Editing and formatting are good, I noticed no undue accumulation of glitches. Layout adheres to a really nice two-column full-color standard. Artwork is stock and has no relation to the material depicted herein. The pdf comes fully bookmarked with nested bookmarks. Cartography, while still bare-bones and not up to the level of detail I’d like to see, particularly regarding player maps/VTT-capabilities, but they are a bit better than the ones for level 1.

Rich Redman, Jeff Lee, Michael McCarthy and Louis Porter Jr. have written a per se solid undead-level here. The chain/pillar motif is cool and I frankly wished the module did a bit more with it (swinging rooms! Crossing pits on chains! Immortal undead that need to be buried… (due to the temporal nature of the dungeon, one could explain reverting collapses…) There are so many cool ideas there that the module simply doesn’t use. The rattling crypt is creepy; it is deadly; it is well-written…and it is, as far as undead dungeons go, painfully vanilla. It’s deadly mainly due to the fact that you can’t properly rest, but a strategic group can empty the level – the boss is underwhelming and so are the enemies encountered. The module doesn’t make use of the cool dungeon-premise, but I expected that; what I did not expect was that it reduced its cool, evocative terrain features and leitmotif only to this extent – the pillars and themes here could have carried so much more.

Don’t get me wrong – the writing’s pretty good and the dungeon level is pretty nice…but at the same time, it falls short of the potential of both the dungeon and the level; the standard enemies and the less than impressive maps also don’t really help this module. If you’re looking for a solid undead-themed level, then this certainly does the job…but honestly, I know a lot of undead-themed dungeons and levels that may, in parts, have weaker writing, but more interesting mechanical components, better components to set them apart. As a whole, this is, to me, this was a rather weak and disappointing installment – not bad per se, but also weaker than level 1. My final verdict will clock in at 2.5 stars, rounded up by a margin due to the low price and in dubio pro reo.

You can get this dungeon level here on OBS.

You can get the first 4 levels here on OBS!