Zeitgeist #12: The Grinding Gears of Heaven

Zeitgeist #12: The Grinding Gears of Heaven 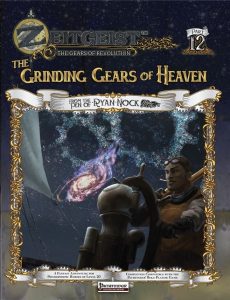 The 12th installment of the massive Zeitgeist-AP clocks in at 92 pages, 1 page front cover, 1 page editorial, 1 page ToC,1 page SRD, 1 page back cover, leaving us with 87 pages of content, so let’s take a look!

This being an adventure-review, the following will contain SPOILERS. Potential players should jump to the conclusion. It should also be noted that I may reference other installments of the AP, so you HAVE been warned. From here on out, the SPOILERS reign.

Okay, only GMs left around? Great! So, in my best impression of one of my players’ catch-phrase: “My friends, the stakes have never been higher!” The massive conspiracy, the Obscurati, have tinkered with the world. Their powerful ritual, intended to reshape reality, was foiled by the PCs. In the epic aftermath of the sundering of the world from other planes, the brave constables of the RHS have fought collective intelligences, saved nations and defeated Kaiju-sized monstrosities. They have established free will as a paradigm and foiled the masterplan of immortal Nicodemus. And now, the world is spinning towards the gyre in an evocation of the classic “Second Coming” – the center cannot hold; massive gears in space, where creation annihilates dying worlds, grind them into the raw stardust of creation. Nothing short of world-wide annihilation and the dread end-game of the Voice of Rot need to be foiled. The PCs are leaders of their world (hopefully – there is a pretty high chance that they botched at some time, with every failure putting more control into the Obscurati’s hands), known across the globe…but what does that matter when planar flight’s impossible and the world is spinning into the multiverse’s gyre?

The PCs will begin their deliberations to be contacted by Rock Rackus, celebrity adventurer, who is possessing a medium to tell them that a weird golden airship is attacking Av, the plane of dreams – it is thus that considerations of dealing with the Obscurati-controlled Danor need to rest for a bit, as the PCs try to use the planar rift of cauldron hill to arrive at the Bleak gate. Here legions reminiscent of those of Egal the Shimmering have been attacking – oh, and the plane is also spinning towards the gyre; depending on the fey in charge (which was influenced by the PCs), they will have different ruler to save- though saving said ruler from the world mote Egalitrix will be tough.

And yes, worlds will be shattering, falling into the gyre, which brings me to a weird peculiarity – a cinematic explosion that may smash a PC into an endless vortex of flame has terrain mechanics like: “+33 vs. Fortitude”….which makes no sense. Fortitude denotes a bonus, not a value. Doubly weird: The text before that mentions a correct solution, a Ref-save and a DC. This may be a small hiccup in the presentation, yes, but things like this feel jarring in light of the quality the module otherwise presents. We have troops of ghosts, taking control of airships…and the overarcing metaplot of making planar icons from the planes that are plunging into the gyre, for without these icons, the Axis Seal ritual is impossible to complete.

When the world of dreams is collapsing, torn asunder by the gyre, a shockwave sends the PCs unconscious….and doubles as the reason why you see this and #13’s review back to back.

Again, this is a MAJOR SPOILER.

You have been warned.

So, the world’s collapse sends the PCs into unconsciousness – which is an interesting narrative device. You see, the true PCs are back at home and a dream echo is what’ll be the protagonist for the remainder of the module…which makes sense, considering that nothing can leave the gyre. The knowledge gained by these echoes can, in the end, be projected back to the proper PCs, as they try to stop Nicodemus in #13. So basically, this and #13 happen at pretty much the same time, which makes for a more interesting climax than back in WotBS (War of the Burning Skies), which had 3 potential climaxes that could be run in any sequence…or just pick one. In the end, that was one structural weakness of the otherwise neat WotBS-AP and it’s nice to see EN Publishing not repeating it.

I digress. So, the PCs are in the gyre, where worlds are churned asunder and they need to generate planar icons to tether their world in the ritual – but which to choose? Well, that would be the next chapter and it is here we dive into a time-tested favorite of mine, genre-wise: Hex-crawling. Yeah, you heard me. We’re hex-crawling through world motes plunging into total annihilation. We’re fighting mandala beasts and in the best of hexcrawling and planeshopping/spelljamming traditions, we find pirate strongholds, tombs of dwarven all-kings…and finally, on Ascetia, the hidden jungle (yeah, the symbolism sometimes hits you over the head), the PCs meet…Nicodemus? Yep, William Miller would be proper, though, for he is Nicodemus’ reflection, much like the PCs are reflections…and it is here that #13 should be started. Sure, you can finish #12, but from a narrative point of view and a structure/pacing perspective, this switching is amazing.

So yeah. Please switch towards #13. I’ll be waiting here for you to read up on #13’s inflection point switch back here.

All right, so, William Miller’s as different from Nicodemus as possible – he shares the same soul, but centuries of detachment, a lack of massive magical power and a thoroughly different perspective mean that the PCs may actually pull William Miller to their side, providing a very powerful means to finally defeat Nicodemus in adventure #13 – provided they play their cards right and realize the guilt-impulse that is so crucial to character motivation. It should be taken as the highest accolades that the BBEG of this campaign is indeed interesting enough to warrant such closer examination. It is also here that the PCs can meditate upon the grave of Kavarina’s daughter and learn about Srasama, the eldarin goddess who remains in the gyre, courtesy of teh aftermath of the great malice. The deity, if destroyed by the gyre, has one final act she can perform – whether it’ll be vengeance or the resurrection of those fallen to the Malice will determine to an extent the ultimate outcome of the saga.

In the southern part of the gyre (hexcrawlin’!), the PCs will have a chance to visit a graveyard world in the throes of a deadly magical, seemingly incurable plague; as the Pcs collect planar traits and visit strange and metaphysically relevant places, the PCs will still have to deal with Egalitrix, a powerful flying fortress manned by infernal troops. Yeah, they act smart, are deadly…and as pretty much any time when the AP insists to employ its horrible ship-combat options, I’d strongly suggest a proper redesign with the Fire as She Bears/Ships of Skybourne-rules. (The latter book, while harder to grasp at first, EXACTLY has rules that can deliver flying fortresses like this!)

And then, the PCs arrive at Reida, the broken arc of history, which is within the very coils of the Voice of Rot – and indeed, the famous “rough beast” of the famous poem. And it is one for the ages. The Voice is LITERALLY destroying the metaphysical embodiment of the PC’s home’s history, as its gargantuan bulk (Suggestion: Serpent skull + 30 coins…this thing is BIG) slithers over the arc, constantly moving, constantly tearing away…oh and it has 2 thresholds, where is becomes ever more dangerous, calling forth all the dead of history and even wrecking the PC’s maximum HP. This titan is also where you can let loose like crazy – it’s incredibly lethal and the PCs being reflections, it can kill off them sans impunity…after all, in the end, the only thing left to do will be to fall into the gyre, rejoin with the proper body…provided they have someone left with an emotional connection to. Fun fact: I actually pulled exactly that emotional anchor transition in my very first campaign’s climax. That just as an aside.

The reflections of the PCs are ground to stardust. They may or may not take a goddess and more with them. They have the tools to undo the damage Nicodemus has done and prevent him from permanently solidifying the new world order. One final task. The fight for the very soul of the new world, the chance to create one’s utopia, to form design the zeitgeist. It’s now.

The pdf concludes with a full-color map of the hexcrawl (several full-color tactical maps are included as well), a massive bestiary of the high-CR beings encountered, a handy GM cheat sheet of planes with associated energies and traits, a similarly handy list of gyre planes and dying worlds, a handy list of color-coded planes by type, sample combinations that could result in e.g. technocracies, pastorals, etc., a sheet to track bonding with energies, as well as player’s sheet for tracking gyre-exploration and, finally, a player’s version of the gyre-map.

Editing and formatting are very good. I noticed a couple of minor typos and small hiccups as that mentioned before. Layout adheres to a 2-column full-color standard and sports a blend of full-color original and stock art. The pdf comes fully bookmarked for your convenience. Cartography of both hex-map and tactical maps is in full-color and nice, though the tactical maps don’t come in the usual, blown-up-to-one-page standard, which is slightly annoying. The pdf is layered, which can render the file pretty printer-friendly to print out.

Ryan Nock’s grinding gears of heaven is perhaps the most far-out module I have read since Coliseum Morpheuon. It’s also the highest-level hex crawl I have ever seen…and makes full use of being high-level. The module throws pretty much a huge sandbox that will make fans of Planescape and Spelljammer cackle with glee at the PCs and represents one of the most poachable scenarios in the AP – you could conceivably ignore the whole saga and just run this as a climax for your weird planes-hopping campaign. It would lose some of its emotional impact, obviously, but yeah.

That being said, this is very much a part of the saga: A thoroughly unconventional one that has one of the most epic boss fights I have ever seen. Oh, and if that wasn’t enough – if you’re a well-read person or consider yourself to be a scholar, then this book’s continuous barrage of subtle allusions to literature and tropes will make you smile from ear to ear. Indeed, while the intrigue aspect is less pronounced here than in the rest of the AP, the very real scope, the massive array of what’s at stake render this one of the most epic-feeling modules I have ever read. How often do you get to adventure to puzzle together your world’s ideology? That’s basically a more player-agenda driven Shin Megami Tensei’s Lucifer’s Call…but you don’t have one planet…you have a ton of them. Much like all installments of Zeitgeist, the ship-combat imho needs replacing…badly. And much like every installment of the AP, it needs a capable GM and involved, proactive players that can juggle the concepts…but for any group that wants to play something SMART, this is absolutely amazing. My final verdict will obviously be 5 stars + seal of approval, in spite of the minor hiccups…so let’s see whether the finale can hold up this level of quality…see you in #13’s review.

Prefer the 4th edition version? You can find that one here on OBS!

Want a whole Act of the campaign?

The whole campaign in pdf can be found here!