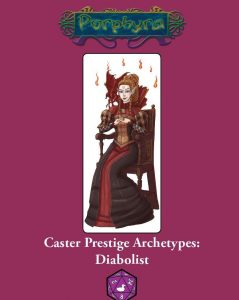 This installment of the Caster Prestige Archetype-series clocks in at 9 pages, 1 page front cover, 2 pages of SRD, leaving us with about 6 pages of content, so let’s take a look!

The diabolist prestige archetype herein is built with the wizard as a base class, but alternate rules for arcanist, cleric, oracle, psychic, sacerdote, soceror and witch are included. Diabloists need to be Lawful Evil and get d6 HD, 2 + Int skills per level, proficiency with simple weapons and the favored weapon of the patron and 1/2 BAB-progression as well as good Will-save progression. They get full prepared spellcasting, governed by Int, of up to 9th level and receive a cleric’s evil aura. Being damned to hell, diabolists are harder to resurrect, requiring a CL check to bring back. At 10th level, the diabolist is potent enough to be exempt from this rule.

The prestige archetype begins play with an infernal, lawful evil familiar and is locked into having that – so not bonded object. The diabloist gains bonus spells, courtesy of his infernal patrons – these, unsurprisingly, would be rather charm/fire-themed.

2nd level yields the ability to channel hellfire when casting fire spells, a number of times per day equal to the highest mental attribute modifier, minimum 1. This is done as a fee action and modifies the standard spell’s fire damage to inflict hellfire, which is here defined as 1/2 fire damage and 1/2 damage from an unholy source, which does not affect evil creatures, but doubly affects good targets. Kudos for not falling into the “invent damage type” trap here. Also: creatures affected by protection from evil or law are not affected, which is a cool failsafe, though the pdf forgot to italicize these spell references. Starting at 14th level, this ability may be used in conjunction with all damaging spells. Kudos: Descriptor-changes, if applicable, are covered. Nice catch here!

4th level yields a +2 bonus to Charisma and Charisma-based checks when interacting with devils and fiendish creatures. This bonus is further increased by +2 at 10th and 18th level. 6th level yields free Improved Familiar, but locks the diabolist in the imp choice. 8th level provides a hell-themed 1/day dimension door or plane shift – this is considered to be a lawful and evil act and cannot penetrate areas warded from teleportation. Speaking of which: the diabolist gains an additional daily use at 12th level and every 4 levels thereafter, with each such increase also unlocking a new SP like teleport or, at 20th level, gate, though these uses consume progressively more daily uses of the ability. Diabolists with obediences may trade in daily uses of the ability for obedience boons for an alternate ability progression – which makes surprising sense, as far as I’m concerned.

As a capstone, the diabolist may use the calling spell of planar binding when calling a named devil as a standard action and bargaina s a move action. Damn (haha!) cool!

As mentioned above, we do get alternate build notes for e.g. psychic etc.-based diabolists. The Prestige archetype also has custom favored class options for anpur, avoodim, dhosari, erkunae, kobolds, tengu and tieflings as well as the core races – these generally are pretty interesting and thematically fitting – humans can e.g. be sooner exempt from the no-resurrection drawback.

The pdf also has a brief appendix depicting the Infernal Obedience feat (guess thrice what that one does) – the boons are btw. unlocked at 12, 16 and 20 HD and two sample, generic archdevil obediences are included: Contracts, Pride, Slavery and Tyranny nets darkness, deeper darkness or burning hands as SPs as the first boon, then perfect sight via ember eyes and a thirdly, a 1/day delayed fireball hellfire blast as an SP. The second generic obedience would be Contracts, Devils, Secrets – boon uno provides unseen servant, detect thoughts or glibness as SPs. Boon deux provides the means to infiltrate clergy and pass as one of theirs. Number 3 is cool: Cha-mod times per day, it lets you revoke the healing a creature received from you at your whim. I totally can see that work as a cool narrative device!

Carl Cramér’s diabolist is a surprisingly cool prestige archetype – it does not try to reinvent the wheel, but it doesn’t have to. The obedience interactions are cool, the rules-language, for the most part, exceedingly precise. In the few cases where it deviates from standard wording, it is only a cosmetic one “level 12” instead of 12th level, for example. So yeah, as a whole, I really liked this one. Granted, I think that e.g. cleric should have its own dedicated diabolist to make better use of the hellfire theme, but for the arcane folks, this constitutes a nice and well-wrought prestige archetype. Well worth 4.5 stars, rounded up for the purpose of this platform.