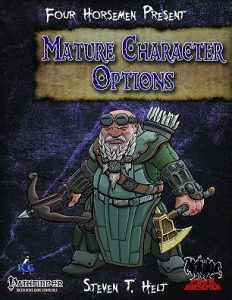 This installment of the Four Horsemen Present series clocks in at 12 pages, 1 page front cover, 1 page editorial/advertisement, 1 page SRD, leaving us with 9 pages of content, so let’s take a look!

The first thing you’ll notice herein is that this is not simply an accumulation of rules – we begin in a rather pleasant manner, we begin by highlighting several components of the ROLEplaying aspect of our game that can prove to be interesting for both players and GMs alike – mature themes. No, this does not mean that this book is gory or the like – it means that it highlights the effects of an enmity grown over long years of one’s life, the transition of faith strengthening or weakening, the effects of notoriety and parentage, romance and tragedy and their potential effects on the respective character and his outlook on life. Each of these themes does come with one trait – though, annoyingly, while the traits themselves are solid, one does not use a trait-bonus, which is uncommon, and they do not list their sub-type of trait, which can be a bit problematic: Other than that, longer smites, the option to aid via pep talks and similar options are neat.

Then again, this is a Four Horsemen-product and as such, surprise, it does have some meaty crunch. The first archetype we find herein is the drifter gunslinger, who may use his Intimidate skill to set the DC of attempts to use social skills on him. Instead of the startling shot deed, he receives practiced reflexes, which allows him to execute AoOs versus creature trying to hide from him, potentially dispelling all but natural or greater invisibility in concealment methods and rendering the target apparent, failing its Stealth-check. Instead of expert loading, at 11th level, the class gets the recovering fire deed, which lets him counter crits, sneak attacks et al. with immediate action AoOs with loaded firearms. This does not provoke an attack of opportunity (on a nitpick; the pdf reads “draw” an attack of opportunity) and if the drifter hits, he halves the damage taken. Interesting, cool deed!

The idealist medium does not channel other spirits – he channels a subjective notion of either his own past or the ideal he strives to be in a perceived future and also has a modified spell-list. Allies cannot participate in this self-channeling. Shared seance is replaced with the option to use the channeled ideal self to modify one’s own saves, switching which save is strong and which weak progression-wise, allowing the medium to swap the strong Will-save for Fortitude, for example. Instead of haunt channeler, the archetype can select an attribute and meditate on it, gaining +1 to ability and skill-checks pertaining that attribute for the day, +2 at 10th level. 18th level nets timeless body. Concept-wise, I liked this one, but I wished the execution was slightly more dynamic.

Fighters may elect to become veterans: These guys only have a 3/4 BAB-progression, but gain 4 skills per level as well as good Fort and Will-saves and add Diplomacy, Perception, Sense Motive and Stealth to their class skills. Starting at 2nd level, they get an aura that decreases the penalties of fear and emotion-based effects in the area of the aura and 2nd level, he may, as part of rolling initiative share a teamwork feat with an ally, who is considered to have it for the remainder of the combat, with 10th level adding +1 teamwork feat to thus share. This basically sports the per-encounter-mechanic, which I loathe (and have ranted on long and hard against – arbitrarily defined timeframe sans cohesive in-game representation)…but that’s just one issue. A more important one would be that the aura locks these guys out of Bravery feats by replacing that one. Additionally, the combat-commander option has been done in more mechanically interesting and viable terms in various classes…so no, not too blown away here.

On a more positive side, the pdf does sport 5 story-feats, which, story-wise, are pretty cool: Ecumenical represents finding moderation in faith, Lost Sibling poses the challenge of finding the sibling; Polymath a second favored class and Wasted Years eliminates the penalties for old age – all in all, the feats themselves are gold from a narrative point of view. From a mechanical point of view…less so.

Ecumenical nets you +2 to Diplomacy, Sense Motive and Knowledge (Religion) when dealing with a specific religion and the believers, which is pretty lame…but the completion benefit, which doubles the bonuses and nets you a second alignment as which you can count, is pretty cool. Sharing “you” spells with a lost sibling is similarly a pretty nice completion benefit…and it better be, with only +2 Diplomacy to gather information, +4 when it pertains your family as the base benefit. Conversely, a 1/day 1d6 immediate action bonus to attack roll, ability-check and saving throw via Mentor sounds pretty cool…but, as a completion benefit, it has Leadership. Sans prereq. While I am firmly in the “Leadership for all”-camp and use the expanded rules crafted by Alexander Augunas, not everyone is and this one lets you cheese Leadership’s level prereq if your GM is snoring… All in all a section that left me with mixed feelings – if you can live with minor hiccups, the completion benefits make these worthwhile.

The pdf also provides the mortality sub-domain for death, which lets you use Wis-mod when channeling negative energy to cause damage and adds Wis-mod to channel damage caused. The other side would be the vigor subdomain of strength, which increases the Strength-based damage output of your weapons 3+ Cha-mod times for 1 minute, with the precise enhancement depending on the weapon-group you use – kudos for getting that one’s rules-language right.

The pdf closes with 5 new spells, the first of which would be acrogeria, in both the level 6 regular and the level 9 mass version, which temporarily causes aging and related attribute damage, though the damage can be healed via the usual means. The 8th (6th level for alchemists) spell Athanasia renders the target immune to aging magic and the rigors of old age, but does not prolong life -which is cool and all, but what about attacks that age, but are not caused by “magic” -attacks of certain creatures, for example? Not really sure, but I think they still apply… Greenhorn penalizes skill-checks and may even make certain skills untrained for the duration, if the penalty exceeds the ranks, with penalty being based on level…now this spell is creative and unique! Finally, respect for elders grants age-category-scaling bonuses on mental attribute-dependent ability and skill-checks, with, rather cool, dragons, outsiders etc. also getting scaling info.

Editing and formatting are very good, I noticed no significant glitches. The blending of full-color and b/w-artworks, none of which I had seen before, is neat as well. The pdf comes cully bookmarked for your convenience.

Steven T. Helt’s take on mature character options is generally rather nice – the themes evoked and the ideas in the respective pieces of crunch are fun, but the precise execution of the archetypes and options herein fell a bit flat for me. The highlight, beyond the very cool greenhorn-spell, at least to me, would be the story feats and their built-in story-arcs as well as the traits, but in these, there are some minor blemishes to be found. Personally, I am not a big fan of the archetypes apart from the drifter, either and the pdf feels, as a whole, somewhat less inspired and creative than what I’ve come to expect from the horsemen. While by no means bad, this pdf did leave me with a sense of being okay, if not 100% perfect in execution, but also with the sense of lacking a true “blow-me-away”-moment. In the end, this is a good example of a solid product with minor rough edges. hence, I will settle on a final verdict of 3.5 stars. Due to in dubio pro reo policy, I’ll round up for my official verdict, though, admittedly, as a person, this is closer to 3 for me.

You can get this solid collection of options for older characters here on OBS!
Endzeitgeist out.