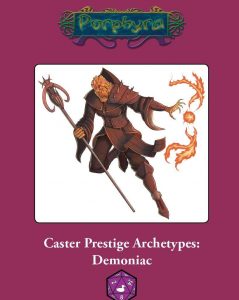 This installment of the Caster Prestige Archetype-series clocks in at 8 pages, 1 page front cover, 1.75 pages of SRD, leaving us with slightly more than 5 pages of content, so let’s take a look!

Demoniacs begin play with a chaotic evil cleric’s aura may spend a demonic favor to gain a wizard bonus feat. These guys may lose a prepared spell to lose a prepared spell in favor of summon monster (not properly italicized), and at 2nd level the demoniac gains an obedience – which can be found in the Demon Lords of Porphyra supplement – color me stoked for obediences, but be aware that as per the writing of this review, these had not yet been released, but if the ones from the Inner Sea Guide are emulated, I’m looking forward to seeing them!

The same goes for the demonic boons – the first is gained on 8th level, with 12th and 16th level providing the follow-up second and third boon. These are also governed by the respective demon lord, so not sure yet how they turned out.

4th level yields nets the demoniac a demonic brand that shows his abyssal allegiance while also acting as a divine focus. 1day, this mark may be invoked as part of casting a spell, adding the chaotic and evil descriptors to the spell…and said spell is not expended upon being cast!

At 3rd level, 7th level and every 3 levels after that, the demoniac receives a demonic favor – this ability can provide a bonus feat, a familiar, energy resistance or a saving throw bonus versus one type of effect chosen from a list, allowing for some nice defensive customizations. Starting at 6th level, the demoniac is damned and thus harder to retrieve from the bowels of the abyss, should he perish.

10th level provides the energumen ability, which 1/day, allows a demonic spirit to possess the demoniac for a total number of rounds equal to his class level. This possession yields a +2 profane bonus to an ability score of the demoniac’s choice, increasing to +4 at 14th level, while also granting electricity resistance 10 and +4 to saves versus poison, These bonuses further increase to +6 and immunities at 18th level. However, after this burst of demonic power, the demoniac must succeed a Will-save or be confused for a number of rounds…which can end up badly indeed. Kudos: The pdf acknowledges the possession effect as such and properly codifies the rules governing it.

The capstone, how could it be any different, would be a demonic apotheosis; however, even here we get a bit of player agenda, with a component of the form being up to the player to choose from. The pdf also covers demoniacs that stray from their destructive path and their means of atonement.

As per the tradition of this new series, we receive information on using arcanist, cleric, oracle, psychic, sacerdote, sorceror and witch as alternate chassis-bases, so if you wanted to play a demoniac based on one of those classes, you’re in luck. The prestige archetype does include a significant array of class-specific favored class options for core races and some of the stars of the Porphyran races.

Carl Cramér’s demoniac is hard to judge in its general potency due to boons and obediences being not included in this pdf. However, since these would not be part of the pdf anyways, I will judge the prestige archetype for what it is as a chassis and reserve obediences etc. for the file that will contain them. As a class, the demoniac, from what I can see, works pretty well. Now granted, the base PrC could be more interesting as far as I’m concerned, but the pdf does a solid job at translating the class into a proper base class. While it does not reach the universal appeal of some other Prestige Archetypes, it represents a nice installment in the series, well worth a tentative verdict of 4 stars – as mentioned, I still need to pick apart those demon lords, but chassis-wise, I don’t see inherent issues in this prestige archetype.