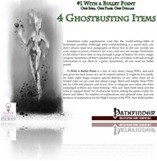 All right, you know the drill – 3 pages of content, 1 page front cover, 1 page editorial/SRD, 1 page content – let’s check it out!

Editing and formatting are top-notch, the pdf adheres to SGG’s 3-column standard and the pdf has no bookmarks, but needs none at this length. 4 solid magical items to hunt ghost’s with, obviously inspired by the Ghostbuster-franchise, I’m a bit torn about them: “Oil of Force” is an item that has been existing for quite some time in my campaign, with the caveat that the treated weapon can, as long as it’s under the effect of the oil, no longer harm corporeal beings. I like my version better, but ymmv. 🙂 The Pocket Coffin, while cool, feels somewhat problematic to me: The whole point of rejuvenating undead, at least in my opinion, is to force the players to unearth plots/background story/etc., investigate and then find a way to put the creature to rest. While this magic item provides roleplaying potential galore, it also somewhat limits aforementioned take. I think I would have preferred it taking care of haunts… The Rod of Holy Water…well, is not for me. If I want holy water to be sprayed, I much prefer it from a combination of aspergillum and meteor hammer, but that may just be me. The spectral torch on the other hand, is again, an awesome item that should keep the players giddy with anticipation – especially if the GM devises a complex set of colours/consistencies for each type of undead – speaking of which: I would have loved to see this information contained here as well. This one’s hard to rate, as personally, well, I was rather disappointed by the pdf. There’s nothing per se wrong with the items, but at least to me they feel like they could have been enhanced easily to truly shine – the brass coffin-form of the ghost trap is a great example that it’s possible. For me personally, this pdf is a solid 3 stars – ok, but nothing that got me too excited. As a reviewer, though, I can easily see people enjoy this pdf much more than I did and thus, my official verdict will be 4 stars.

With A Bullet Point: 4 Ghostbusting is available from: