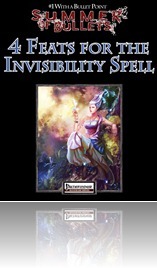 All right, you know the drill – 3 pages, 1 page front cover, 1 page editorial/SRD, 1 page content, so let’s check this out!

Invisibility is one of the spells that is just awesome – DMs have fun with it, players love it and this BP expands the potential of the spell further via feats:

Editing and formatting are top-notch, I didn’t notice any glitches. Layout adhere sto SGG’s 3-column horizontal standard and the pdf has no bookmarks, but needs none at this length. Welcome to the endzeitgeist-sounds-like-a-broken-record party once again! This Bullet Point exhibits not only a mastery of cool rules and stellar crunch-design, but is simply A MUST-HAVE, all killer, no filler, a worthwhile, fun, cool addition to just about every game. beleaguered DMs get a bunch of cool toys for their thieves guilds. PCs get vastly improved more versatile infiltration options. And in the end, these feats also facilitate the use of infiltration missions in your game. These feats should be part of the core-rules/standard invisibility options. Just plain awesome! Final verdict will be 5 stars + endzeitgeist seal of approval.

With a Bullet Point: 4 Feats for the Invisibility Spell is available from: