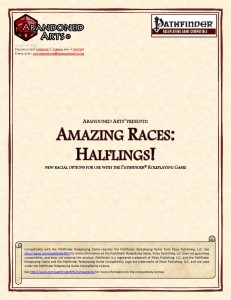 By now you know the drill – 4 pages, 1 page front cover, 1 page SRD, leaving us with 2 pages of content, this time for halflings, so let’s take a look, shall we?

We kick off this pdf with three new feats:

-Combat Improvisationist: Whenever a foe larger than you misses you, you gain the benefit of aid another versus that foe as if the opponent had helped you. This is simple, flavorful and elegant – two thumbs up!

-Halfling Gourmand: +1 to skill-checks (+2 to food-related Craft and Professionchecks) as long as your last meal is no longer than 3 hours past. Meals require 30 minutes to count as such. Nice idea, if a bit weak for a feat.

-Halfling Pipe: +2 Performance (oratory) + (comedy), also inhale inserted drugs as a free action while smoking and add +1 to the DC of your fascinate bardic performance DC, if you have it. Nice idea –personally, I would have loved some slightly more pronounced benefits/more smoking feats.

As per the tradition, we also get new traits, this time around 3 of them for either +1 use of adaptive luck per day, controlling frightened mounts as a move action instead of as a standard action and gain the well-prepared feat, but only for food/drink-related  purposes. If you already have the feat, gain +1 use. Nothing to complain about these.

We also get 4 alternate racial traits: One nets you alertness, one that increases effective skill ranks for purposes of skill focus and similar feats by your wis-mod (which is rather cool), one that nets you +2 to atk after hitting a creature with an AoO and one that does not penalize your AoOs when fighting defensively – which is neat as well – not only for Halflings.

Now the archetype you probably won’t have seen coming: We actually get a gunslinger! The Shire Sheriff (kind of redundant name since sheriff etymologically derives its meaning from shire+reeve, but oh well…)  – the archetype gets an expanded skill list (and 6+Int skill points…), but needs to take the feat to handle two-handed firearms. Now rather interesting and in line with the non-evil alignment, the shire sheriff gets slightly less grit (wis-mod -1, min 1), but actually regains grit whenever he manages to call for parlay or make foes submit nonviolently. AWESOME! When readying shots versus foes, they may also penalize them, even if missing the shot. Shire sheriffs also get their nimble bonus to diplomacy and sense motive, twice the amount versus cowering/shaken opponents. Instead of bleeding wounds, shire sheriffs can avenge allies brought below 0 hp by a foe within 24 hours, getting a massive +4 damage and finally, at 15th level, they may fire warning shots into the sky to make enemies cower –awesome to get one last chance to use non-violent means. Simply glorious!

Editing and formatting are top-notch, I didn’t notice any glitches. Layout adheres to Abandoned Art’s 2-column no-frills standard and the pdf has no bookmarks, but needs none at this length.

Daron Woodson has created one intriguing pdf here – from the feats, which could be slightly stronger, but ooze cool concepts to solid traits and alternate traits, he manages to breathe some style and iconic panache into what is widely considered one of the hardest races to make cool – but the true selling point of this one would be the archetype – with the exception of its redundant name, it offers true coolness and is an avid depiction of a gunslinger not only as a good guy, but actually as a force of law and order. With neat non-lethal capabilities, unique tactical options and its modifications, it is a prime example for good archetype design – it’s not mechanically brilliant, but it doesn’t need to be – it’s just a good, fun archetype to enjoy and one lawmen of all firearm-using races will use in my game. Add to that how the other crunch manages to pin down peculiarities of the rather hard to pin down essence of what being a Halfling means and we arrive with one damn fine offering of the series and well-worth 5 stars + seal of approval.

You can get this awesome supplement for halflings here on OBS and here on d20pfsrd.com’s shop!