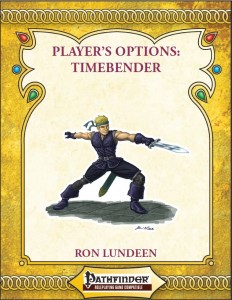 This installment of the Player’s Option-series is 8 pages long, 1 page front cover, 1 page editorial, 1 page SRD, leaving us with 5 pages of content, so let’s take a look, shall we?

Now what does this class get? Well, we’re in for d10, 2+Int skills per level, proficiency with simple weapons and light and medium armor and light shields and full BAB as well as  good ref-saves and fast movement scaling up from basic speed to +60 ft. movement rate at 20th level. Beyond these basics, timebenders get a so-called temporal pool equal to half class-level+int-mod. Said pool can either be refreshed via meditating for 1 hour or 10 minutes, though the latter requires precise measurement of time via a clock or hourglass.

Said points can be spent to gain int-mod as a dodge bonus to AC. Said points also interact with time-based spells, allowing the timebender to ignore detrimental effects of a very narrow selection of spells, while also allowing him/her to forgo benefits of haste to regain a point. Now the signature ability of the class would be the Temporal Flurry – by expending one point, the timebender may forgo his full round action, instead limiting the class to a standard action. However, the timbender creates echoes, which allow him/her to perform a standard action again at initiative -5 and at initiative -10. During a flurry, a timebender may only make unarmed, natural or light weapon-melee attack, use a move action requiring skill, use an extraordinary ability or take a move action. Any attacks made suffer from a -2 penalty and movements still provoke AoOs.

At 2nd level and every two levels after that, the timebender also gets a time control trick, which include access to e.g. evasion, the option to make ranged attacks in temporal flurries, a healing touch, improved AC and initiative – a total of 10 such tricks are provided. The more interesting effects allow the timebender to walk across liquid surfaces when temporal flurrying as long as temporal flurry ends on ground that may support his/her weight or spend pool points to act in surprise rounds or move up to movement as a swift action. Where personally, I’m drawing the line, is with “Shifting Step”, which allows you to dimension door as a supernatural ability for 1 paltry pool point – that’s a resource easily replenished, mind you. Via battle analysis, timebenders may prepare for battle, rolling initiative multiple times via the expenditure of pool points, using the best result. With one of the new feats, said ability may even be shared with allies.

At 3rd level, once until s/he meditates again, the timebender may spend 3 points from the pool to reroll any roll. At 5th level, the timebender also gets the ability to shift adversaries that fail a save after a touch attack into the future, taking them out of the action for at first a single round and later up to 1d4 + int-mod rounds. This ability is BROKEN. Taking a foe out of the combat as a supernatural action can and will terribly screw over plans, battle strategy and the amount of tricks one can build around it are rather extreme and can mean the difference between stunning victory and utter defeat – all based on one ability. With the timebender’s supreme mobility, getting to casters and taking them out of the combat can and will royally screw over the opposition.

At 9th level, timebenders may also spend pool points to force a reroll upon a foe, useable once per meditation period. At 10th level, 10 advanced time control tricks are added to the equation, allowing timebenders to air walk and use the broken “propel into future”-ability at range. On the more balanced side, improved evasion, temporal flurry at initiative -15 or the option to use the most damaging strike as bleed damage on foes.

As a capstone, the timebender may spend 9 points to enact a time stop. We also get a nice level 1 sample character and 4 new feats: Careful Flurry feels rather strong, allowing you to forgo your last flurry attack for +2 to atk in addition to ignoring the usual -2 penalty – which is broken. That’s a potential net gain of +4 per attack. To compare: regular iterative attacks suffer from decreased accuracy, whereas the temporal flurry does not – hence actually getting a bonus. Extra temporal pool points and time tricks are ok in my book.

Editing and formatting are very good, I didn’t notice any significant glitches. Layout adheres to PDG’s printer-friendly 2-column standard and the cover artwork is neat. The pdf comes fully bookmarked for your convenience.

The Timebender is an interesting class, dealing with perhaps one of the most challenging concepts to properly implement in game mechanics and author Ron Lundeen goes an intriguing route here – Temporal Flurry takes a concept which I’ve applied to big singular boss monsters in my campaign and it did work rather well – but it also increased their potency. Now usually, I’d say temporal flurry is still balanced due to its massive restrictions, but getting rid of the flurry-penalty offsets the tiny bit of balance when compared to full-round actions – speaking of which: Timebenders can use temporal flurry for up to 3 attacks – all at full BAB-2 (or at straight full BAB), AT FIRST LEVEL. That’s broken as all hell, even without the OP-feat to get rid of the penalty. And it doesn’t really get better over the levels.

I really, really love the concept of the Timebender. I’m a huge fan of the Time Thief. But the execution is terribly flawed, mopping the floor with comparable classes and worst of all, in contrast to ninjas or monks, offering a way to easily, more easily so than the gunslinger, regain the primary resource that powers said abilities. Concept-wise, this is SO CLOSE to actually being really good, but its balancing is all wonky and would require the hand of a stern developer (and quite probably a complete redesign after that) to actually work. As written, I wouldn’t allow this anywhere near my group. Phase order style combat works when employed by settings like Little Red Goblin Games’ Necropunk, but when a class is the only one who can do it and thus outclass other martial classes, then we have a problem. As much as I love the premise of the class, as close as it may be to being awesome, as written, I can’t recommend it and thus will settle for a final verdict of 1.5 stars, rounded down to 1 for the purpose of this platform.

You can get this flawed, but very interesting class here on OBS and here on d20pfsrd.com’s shop.