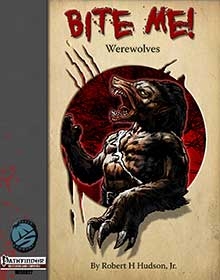 This Bite Me!-installment clocks in at a 30 pages, 1 page front cover, 1 page editorial, 4 pages of SRD, 3 pages of advertisement, leaving us with 21 pages of content, so let’s take a look!

Ah, the most classic, most iconic of lycanthropes known – the good ole’ werewolf, now reimagined as part of the Bite Me!-series gets +2 Dex and Con, -2 Int, the two bloods racial feature (making you count as a parent race as well as a shapeshifter for purposes of being affected by effects), low-light vision, +2 to Perception and Survival. Beast Form works is presented in a rather precise wording construct that takes temporary hit points, equipment and the like into account and the odd formatting discrepancies gone – no complaints. In beats or hybrid form, DR 2/silver is gained and increases by +2 every odd level gained to a maximum of DR 10/silver. The werewolf gains the old wolfsbane vulnerability and silver vulnerability. Regarding beast form and advancement, I do not have significant complaints here.

The werewolves get their own age, height and weight table, which is nice. Now personally, I really hate the fluff provided here with a fiery passion. Werewolf fluff sets them distinctly apart from what we usually call werewolves, making them functional, outspoken, community-minded and relatively loyal beings set distinctly apart from the traditional cursed trope. While that may be closer to the awesomeness that real life wolves are, as a person, I really, really loathe making them good (or even neutral) guys…to me it takes away the whole point of playing a werewolf as opposed to playing an anthropomorphic animal – sans the fury, it doesn’t feel like a lycanthrope to me. Oh well, furries out there: This may be the werewolf you wanted.

Oh, and yes, I am not going to penalize the pdf for its fluff, my own taste none withstanding. The werewolves as depicted here may choose from a total of 11 alternate racial traits that generally are well-balanced and e.g. delay DR-increase to offset for their benefits in some creative rules-operations. 3 sample “subtypes” that use these have been prepared for the reader. The pdf provides a smattering of different favored class options (Core, APG, Magus and UC covered) and they generally are pretty creative and nice, though e.g. the magus receiving pretty powerful weapon special abilities for use with the arcane pool imho needs a nerf: One ability per FCO is too strong. The movement related FCOs also lack the caveat that makes them inoperable unless taken in increments of 5, which can lead to some awkwardness at the table.

The pdf provides a total of 2 different racial archetypes, the first of which would be the Pack-bonded Hunter (ranger), who replaces animal empathy with a tactician-like option to grant teamwork feats temporarily to nearby allies. At higher levels, he replaces woodland stride with AoE-granting of such feats a limited amount of times per day. 4th level locks into the companion bond and also lets him grant favored terrain bonuses and 12th level unlocks a lesser version of quarry’s bonus granted to allies a limited amount of times per day. The Moon Speaker oracle gets Knowledge (nature) and Survival, bonus spells taken from this book and must take two revelations at the listed levels…but fails to note the listed levels. The revelations allow the oracle to force a lycanthrope into humanoid form – automatically, on a touch; at higher levels, you can cause rage…but thankfully with limited uses. The second revelation lets you emit a half cold/half divine burst of moonfire that is treated as silver. I like this one generally, though the 10th level benefit probably lacks the “save-negates-clause” – otherwise, those affected are auto-confused for a round. The upgrade, at 15th level, which adds stun, does have that clause.

The pdf also contains a total of no less than 14 feats, which generally can be considered to be sound in concept: Using howl to use bardic performance, adding bleed to bite attacks, getting a summon nature’s ally II 1d3 pack of wolves…flavor-wise pretty cool, though the latter imho should have a level prerequisite; at 1st level, potentially having +3 wolves is BRUTAL. Harrying, as a teamwork feat, has one damn cool idea: Reducing the movement rate, with allies stacking up on it. I *like* that…but the feat fails to specify *how* you harry. Do you need to be adjacent? Is there a range? Line of sight/effect required? No idea. Cool concept, but unfortunately, it does not work as written. Distracting Howl is similarly cool and problematic: You can emit a howl that dazzles foes. Cool! Allies can join in and increase the severity of the condition? Even cooler, now we’re talking!! Problem: The feat fails to specify the action to activate it and how allies may join in. Does joining in require an action? Since it is predicated on allies also having the feat, does this count against the hard cap per encounter (insert customary rant on why per encounter abilities suck and make in-game no sense)/day? No idea. You can wing the feat, but RAW, it does not work and needs clarification. Gaining an Int-based tactician ability is pretty powerful for a feat. Other feats allow you to assume a more powerful, primal form, move unimpeded through wintry difficult terrain and the pdf also introduces the new Wolf Style with its follow-up feats that emphasizes mobility…and, well, wolf-like tactics. I really like this feat chain! Really odd: RAW, the Hybrid Shape feat is absent from this installment.

The item section has basically wolf-shoes (we all know the type from horrible people who IRL force their dogs to wear them), a moonrod (variant of sunrods, easier to perceive via low-light vision and a cool idea!), a scent marker kit and a wolf whistle. The magic item section features grit to enhance your bite, a perception-enhancing helm, an armor special ability and rings that provide a minor buff and allow for the switching of positions as well as a wolf-calling totem. Particularly the rings are a thing of beauty. The magic section provides the wolf subdomain, which enhances tracking skills and a total of 7 spells: Call of the Wild creates a mind-affecting howl that may cause targets with low HD to tremble in fear; there is a tracking-enhancer, a powerful buff (also available in mass version) to reroll 1s and 2s rolled with natural melee damage, a wolf guardian spirit and two cool spells, one of which lets you monitor allies, while the other is a more powerful variant of shield other that can affect more creatures.

The pdf concludes with two sample NPCs provided in both beast and human form; a ranger at CR 7 and a bard at CR 5. Both come with schemes and plots to make their inclusion in the game easier.

Editing and formatting are very good; on a formal level, there is nothing to complain and on a rules-level, while there are some minor issues, the pdf retains generally a level of professional precision. Layout adheres to Misfit Studios’ two-column full-color standard for the series and features some nice original pieces of color artwork. The pdf comes with a second, more printer-friendly version – kudos for that! The pdf comes fully bookmarked for your convenience with detailed, nested bookmarks.

Robert H. Hudson Jr.’s werewolves, to me, live mostly by virtue of the thematically fitting items, options and supplemental material. As mentioned before, as a person, I really dislike the notion of good werewolves as something that is not an exceedingly rare occasion. This is a personal preference, though, and players who always wanted a good werewolf sans the hunger (which imho defines lycanthropy as opposed to anthro-characters, but I digress), this delivers. The archetypes herein are less creative that I like mine and there are some minor hiccups in the feats, though. As a final complaint: On a formal level, i.e. beyond the precise effects of the beast form, werewolves are identical in framework to the weremantises. I believe the race could have used more unique tricks to set them apart, but that may be a conscious decision to represent the unfortunate streamlining lycanthropes were subjected to in PFRPG, so I’m not going to penalize the pdf for that either. If you expected a tad bit more in that regard, though, you may end up disappointed. The pdf still does have quite a few nice pieces of content, though – hence, I arrive at a final verdict of 3.5 stars, rounded up to 4 for the purpose of this platform.

You can get this take on werewolves here on OBS!
Endzeitgeist out.