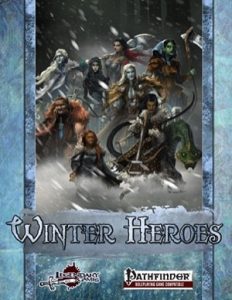 The first of the characters herein would be Brynla, a scythe-wielding half-orc druidess of the green faith initiate archetype; bullied by her less than kind siblings and raised in humble origins, she is slowly moving towards becoming an acolyte and certainly, spring seems like a symbolic change of pace for her.

The second character in here, Maja Tasker, is an investigator sleuth of halfling descent, her smarts and investigations have unearthed that Kostchtchie’s minions have been cooperating with a white witch of Irrisen – but why? How? The search for truth will lead her, provided she survives, towards truths unimagined as her parents still pose a mystery she needs to solve.

Pero, a human summoner, just 16 years old, was saved from raiders…and found a purring creature atop him, the eidolon was here, avatar of his power – ever since that, the young summoner has kept his high spirits and positive attitude and, in case you were wondering – yep, eidolon stats included.

Roelof, a male dwarven witch (ley line guardian), has forever been intrigued with the rare lore of odd arcana and studied ever since a key event – but when he tried to actually fulfill his life’s dream, receive the training from the witches he so desperately craved, he was laughed off. Frustrated, he looked back to his childhood and realized his calling, singing to him from his past…and so he may yet become a dwarven, male winter witch or horizon walker…we’ll see.

Senka Featherfingers, fetchling rogue, she has found a mysterious bracelet, but ever since then, she has been haunted by unfortunate occurrences, as winter itself seems to trail her very steps…but how and why, that will need to be shown.

Stojan would be a great candidate for those looking for a slightly more uncommon character, as the two-handed fighter is also a half-snowborn elf; here would be btw. as great a place as any to notice that the pregens do feature some serious interactions among themselves- Stojan’s items, for example, contain items he is carrying for his brother and similarly, the backgrounds intersect.

Aforementioned brother would, just fyi, be the half snowborn elven battle oracle, was transformed into his current state by the same traumatic event – and like his brother, his seemingly carefree attitude is founded upon a desire to hide the scars of his past, here mixed with a fear that his brother may seek the relief of death.

The final character herein would be Zuza Holt – a herald of the horn skald, Zuza can be pictured as a female version of Conan – in love with a warm fire, pleasures of the flesh and blood-stirring songs, the greataxe-wilding beauty feels like a Cimmerian (or Kellid) warrior queen transported to Golarion, but one with a touching quest: She is looking for an elixir of sex change for her sister, for that is her heart’s desire.

The pdf does feature a page of paper minis for the respective characters.

Editing and formatting are top-notch, I noticed no significant glitches. Layout adheres to a gorgeous two-column full-color standard and the 1-page artworks for the PCs make for glorious artworks. The pdf comes fully bookmarked for your convenience.

Liz Courts’ Winter Heroes are an inspired collection of diverse characters that cover a lot of different roles and feature evocative angles. Power-level wise, they are efficient at their respective niches/tasks, but more importantly, their builds represent feasible and organically grown builds – the stats represent the stories and vice versa. With a diverse set of angles, AP leitmotifs reflected in backgrounds and generally great prose, this collection of pregens is well worth 5 stars + seal of approval.

You can get these cool (haha!) pregens here on OBS!