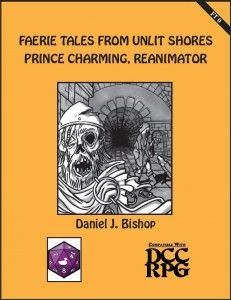 This adventure for the DCC-rule-system is 21 pages long, 1 page front cover, 1 page SRD, leaving us with 19 pages of content, so let’s take a look, shall we?

Still here? Prince Charming of the fairy-tales – we know him. Or do we? In this series, the character-trope is actually one man. His first wife Cinder Ella, his second wife Snow White – both returned from what could be death, have perished and now he’s set his ice-cold stare on a sleeping beauty. Unfortunately, she sleeps in the cursed ruins from which his men tend not to return – and what better way to get what he wants than just rounding up some peasants to do his dirty work? Yeah, those press-ganged poor fops…they are your PCs.

And oh boy, this once is HARD. Seriously – sans getting XP after the respective encounters, the PCs will probably be obliterated unless they are VERY good and lucky, so beware: Not for the faint of heart! The ruin per se is guarded by deadly, poisonous vines and the deadly flora may actually be the first thing that can obliterate your PCs – thankfully, the Prince can always send in more peasants… Of course, the PCs may actually find a secret way into the ruins or just push through a breach in the wall – either way will not be simple, for the ruins are infested by Hobyah, somewhat darker small relatives of brownies. Among the ruins, the PCs may find the former laboratory of one Doctor Chapman: Among the detailed possessions, one can find Black Sabbath records that have never been released in our world and similar curiosities from throughout the plains and worlds – Doctor Chapman’s spirit, as he manifests, is actually rather amenable and helpful, offering some nice magic items for the PCs…but also warning them about not liking thieves. And he is not kidding. He also warns the PCs that the prince will not let them live, but also that he does not understand the curse and hence, they just should not interfere upon having recovered Sleeping Beauty…

Within the castle, they may also encounter a weird, deadly cross between squid, spider and centipede (can you say “Eaten by a grue-like entity?”) and finally, the PCs may find a hall, where faerie-thrall maidens may bequeath gifts like the sword of truth, an intelligent blade, the shield of truth, which protects from the aforementioned vines and will not stand any falsehood uttered and finally, a mirror into which a demon has been bound, which reveals the truth. And the PCs better do their best and use these in smart ways, for in order to reach sleeping beauty, the PCs will have to deal with a dragon made of roses, which btw. is also one of the most challenging adversaries I’ve seen in quite a while at this level… Any victory is hard and dearly won. Taking the sleeping maiden to the prince, the PCs are held at arms point, while he inserts his reanimation-serum to return her to life.

Unfortunately for the prince, she turns undead and rips his head clean off – essentially immortal, the undead bride starts annihilating the prince’s men, while legions of the fallen spawn from the ruins. The Pcs may escape with their life, but the undead princess remains in the forests and will probably return in the sequel…

We also get Doc Chapman as a potential patron.

Daniel J. Bishop offers here a twisted take on faerie tales that is glorious to read and run, as it resonates deeply with faerie-tale tropes, while offering iconic, cool challenges. There is not much to say here beyond that each and every component of this module is simply superb – from production values to maps and artworks to the superb treasure trove of imagination that went into this, we get one superb module that DMs of other rule-sets should get as well – for scavenging ideas alone, this is worth quite a lot. And then, add that this is “Pay what you want” – even for a commercial module, this would easily score at the highest possible rating. As Pay what you want, this is one of the scarce instances, where the absolute superb can be gotten for any price your able to pay – and believe me when I say that this module is worth your bucks. My final verdict will clock in at a resounding 5 stars plus seal of approval – get this and drop the guys from PDG a tip: Quality like this is rare!

You can get this superb DCC-module here on OBS for any price you’re willing to pay!