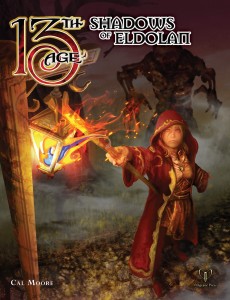 This adventure clocks in at 72 pages – since I only have the softcover, I can make no qualified statements on the pdf’s electronic features.

This book was moved up my reviewing queue due to me receiving the softcover of the book for the purposes of a fair, critical review.

First of all, this begins as a kind of gazetteer – the city of Eldolan, depicted with a nice b/w-map, comes fully detailed herein – and it is a n interesting backdrop: Situated near the Archmage’s metropolis of Horizon, but far enough away to be a sovereign entity, we still have, obviously, a magocarcy on our hands – with 3 different wizard schools, there is quite a bit of inner- and inter-school rivalry suffusing the town’s social structure. It should also come as no surprise that the members of the school obviously sport several privileges, with anyone nonmagical being relegated to the status of a second-class citizen-. On the plus-side, the overabundance of magic also means that there are quite a few unconventional amenities – from anti-vermin bombs to the lamplighter’s guild that illuminates the districts at night with magical light. It is against this backdrop and the status quo of an overexerted city watch that also has its issues with the feuding wizards that this adventure is set.

So, our fresh heroes begin play in this settlement at the request of, obviously, their iconics, with several potential tie-ins as hooks being provided.

We begin this module pretty much in media res as the PCs are at a small market square, only to have a cart erupt in zombies to spread the Lich King’s panic in the streets – a task somewhat undermined by the pumpkin-headed, pumpkin-throwing zombie provided. From here on out, it becomes obvious pretty fast that the authorities are terribly overexerted and require assistance and so the modular investigation begins – depending on the clues gathered after the assault, the PCs have a lot of leads to follow, which a GM can easily interconnect – essentially, the structure of the module is generated in a way that allows for the respective sub-chapters to lead into another and avoid dead-ends – so structurally, we have a sound set-up at our hands.

Coincidentally, each of the clues leads to another district of Eldolan. In the commons, further investigation and asking around sooner or later points towards a rather nasty gang of thugs, who can be beaten or persuaded into divulging the information regarding the target of the enigmatic Dreammaster, a dealer of drugs that has been undermining the pricing of the dreamleaf drug. His hide-out, as it turns out, is solidly fortified in a smartly constructed hide-out within an abandoned theater – beyond his smart-fighting flunkies and actually sound security protocols, the dreammaster provides for a great show-down on the dilapidated stage, making perfect use of 13th Age’s great terrain-based attack-tricks – including a nice get-away route for the second half of the fight, phase two of the boss, if you will – alas, an undead will eliminate the dealer before he can divulge too much -only that he has been acquiring junkies…alive and dead, for some unknown buyer.

A particular peddler of the bodies of the dead would be potential competition and so, an organic lead – asking around the more dangerous taverns at the docks (hopefully avoiding too bad a tavern brawl) may actually yield non-violent results when interacting with the pragmatic criminal – the lead thereafter pointing the PCs towards a small, yet nevertheless deadly cult of minions of the Diabolist – hopefully managing to interrupt a human sacrifice – otherwise, the PCs will have to not only defeat the cultists, but also the deadly demon summoned.

In the temple district, a man can identify one of the initial zombies as a recently deceased friend – though, oddly, he should not be among the walking dead: After all, his body was supposed to be properly consecrated and buried. Confronting the local adherents of the priestess with these facts will require a lot of finesse and tact, but should the PCs succeed, their descent into the catacombs will sooner or later not only unearth a sabotage of the magical funeral rites – and find themselves besieged by undead in a harrowing fight in the middle of the tight subterranean confines, while also unearthing the presence of a hostile agent within the ranks of the Priestess’ followers.

In the higher-class district of the saddle, a haunted and since then abandoned brewery has obviously also played its part in the operations of the Lich King’s servant’s conspiracy – here, we imho have some of the most exciting combats in the module – with very interesting terrain hazards and solid tactics, the challenge posed here is cool – even before the inclusion of a drunken ghost to lighten the mood.

Now finally, the PCs may have also found hints that led them to a nice shop of magic curios and encountered the eccentric owners here – but ultimately, sooner or later, their opposition will realize that they have a group of deadly foes in the PCs – and thus, the cabal called seekers will sooner or later try to assassinate them as they collect their evidence, piece by piece. Alas, much to the PC’s chagrin, the evidence collected points towards the operations of the Lamplighter’s Guild – and obviously, the PCs can’t simply waltz into the prestigious place. Thus, some subtlety is required – and, within the compound, hopefully some discernment between loyal lamplighters trying to weed our foreigners and members of the cabal seeking to eliminate the meddling PCs…

Still, this final trek should prove enough information to convince one of the owners of the emporium to divulge the necessary information – and realize that the other owner is the head of the conspiracy. Thus, the PCs enter the final, short mini-dungeon to confront the mastermind in his own abode, duking it out not only with his incomplete flesh golem, but also with his superb defensive strategies – the PCs will have to be at the top of their game to prevent the escape of the mastermind – and may not even notice his escape until it’s too late! A furious finale indeed!

Editing and formatting are top-notch, I noticed no glitches. Layout adheres to an easy-to-read, aesthetically-pleasing two-column b/w-standard and the pdf sports several solid b/w.-artworks as well as a significant array of gorgeous b/w-cartography for just about every combat in the adventure. The paper of my print edition is a nice, high-quality glossy type.

Cal Moore delivers perhaps the one genre 13th Age is imho worst at here – an investigation. While the system’s notion of failing forward is a required design-choice for a good investigation, the system is somewhat hamstrung by the sheer matter of the fact that it does not cover non-combat challenges that well. Now the task, in the absence of a codified skill-system, would be to properly depict the logical progression of the legwork – and surprisingly, the module did excel beyond my expectations in this arena and manages to offset the fatigue that sometimes settles in such an arena of too few dice rolls via clever use of relationship dice, which coincidentally also help prevent stagnation of the investigation.

On the plus-side, this module manages to not only mitigate the brunt of the system’s less refined components, but also capitalizes on its strengths – there is not a single boring combat herein. Not a single one. With terrain-specific attacks, unique tactics and challenging boss-fights, the combat-component is simply fun and highlights well a massive strength of the system. This module is fun and more grounded than what I expected to get here. My players most certainly had an interesting time playing this module and enjoyed it – though it should be noted, that for a GM, the lecture is somewhat less captivating than one would expect, mainly due to the actual plot behind the whole conspiracy being none too exciting with the villain’s motivation being opaque and pretty bland. Now my players didn’t mind, but personally, I was pretty glad they did not pause to question the motives of their foes or their modus operandi, something I, as a GM, did not particularly care for.

This may sound negative, but it should be testament to this module’s quality that its accumulated set-pieces and fast pace can transcend these notches to the point where they do not show. In the end, this module was a surprise for me, mainly because it is pretty hard to portray the genre within 13th Age’s rules-framework, much less in a way that proved to be this fun, this well-structured. My final verdict will hence clock in at 4.5 stars, rounded down only due to the lack of meat behind the motivations of the primary antagonists – while it did not show in my playtest, I can see particularly inquisitive groups interested in complex motivations, especially those with a ToC or CoC (or other investigation-heavy RPG)-background potentially being frustrated with this component.

You can get this fast-paced, nice investigation here on OBS!