The Genius Guide to the Cruorchemist

The Genius Guide to the Cruorchemist 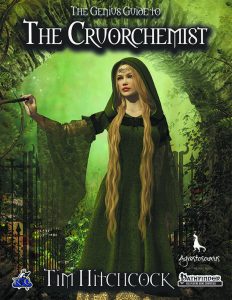 This base-class clocks in at 11 pages, 1 page front cover, 1 page editorial, 3 pages of SRD, leaving us with 6 pages of content, so let’s take a look!

Starting at 3rd level, the cruorchemist can use his distillations to pay for the spell level increase instead. While it is clear from the context how this is supposed to work, it should be noted that the ability’s wording is a tad bit wonky. 9th level allows the cruorchemist to apply the effects of metamagic feats to bloodline powers…which may be non-functional, depending on the bloodline chosen. A tad bit weird as well: 4th level and 7th as well as every other levels thereafter yield a metamagic feat – but aforementioned distillation/metamagic ability is gained at 3rd level, which means there’s a solid chance the ability won’t do anything for 1 level.

Starting at 6th level, the cruorchemist gains a metaspell slot: These are quasi-spellslots that allow for the use of metamagic to enhance spells beyond the level the cruorchemist could usually cast. At 6th level, a cruorchemist could e.g. cast a sickening magic missile. The metaspell slot itself is not expended, however, the ability cannot be cheesed – why? Because the cost for distillation still acts as a limiter and since this hypothetic spellslot is not consumed, it requires the consumption of distillations and regular spell slots in a combination that would sum up to the costs. 8th level and every other level increases the ability to cast thus metamagically enhanced spells by +1 – at 20th level, they could e.g. cast a quickened level 6 spell via a hypothetical 10th level metamagic spell slot. This ability is pretty complex and its presentation could be slightly clearer, but yeah – interesting.

7th level provides a homunculus, as via Craft Construct, and uses a distillation to activate it – one distillation keep it active for 24 hours. Starting at 10th level, the cruorchemist gains the ability to enhance the homunculus. They include extra eyes, acid breath, SP, spitting poison, better hides, etc. – these are nice and require distillations to activate. They last for 10 minutes per caster level and an additional such enhancement is learned at 14th and 20th level. Okay…so what action is feeding the homunculus the distillation? Unfortunately, the ability doesn’t specify and the alck of an ability type means that I can’t even resort to a default.

The pdf does sport a couple of supplemental options: 4 feats are included: Aspect of the Homunculus lets the cruorchemist temporarily assume characteristics of a homunculus. Problem: The rules-text implies that the feat transfers the abilities from a homunculus, but prerequisite-wise, the feat only lists distillation, which makes it a bit confusing. Extra distillation nets you +1 distillation (and may not be taken multiple times). Enhance Familiar allows you to use distillations to enhance familiars as though they were homunculi and Craft Advanced Homunculus nets homunculi you make the advanced creature template at +50% cost.

The class also comes with an archetype, the cruormorph. These guys lose spells, but may use distillations to cast bloodline spells as SPs in addition to the usual bloodline power activation. At 3rd level the archetype replaces metadistillation with the ability to apply metamagic feats to bloodline powers or bloodline spells. More on this particular aspect in the conclusion. 7th level replaces the metaspellslot with the ability to craft a specific distillation that allows her to apply the effect of a homunculus enhancement to herself, lasting 5 minutes + 1 minute per class level. 10th level and every 3 levels thereafter yield an additional enhancement. Okay, do these cost additional distillations? Or are the additional homunculus tricks part of the one distillation? At 10th level, the cruormorph can apply metamagic feats known to self-enhancements. Wut? Also: ALL abilities of the archetype lack ability types and are improperly formatted.

Editing and formatting are very good on a formal level. On a rules-language level, the pdf feels…rushed. While the class is mostly intact, it does suffer from being rather hard to grasp, in spite of its brevity. Some cleaning up would have greatly enhanced this. The pdf comes with a solid 2-column full-color layout and decent stock art. The pdf is fully bookmarked for your convenience.

Frustrating. That’s pretty much how I’d describe the experience of reviewing this class. Why? Because the engine of the class, with all its complexities, is REALLY cool and interesting. Tim Hitchcock’s cruorchemist looks like a class that can actually make metamagic matter more.

That being said, the class also is very rough around the edges, so let’s go through it: Beyond item activation not being properly noted for some abilities, the pdf also sports a couple of seriously rough patches regarding the explanation of how the components of the class work. However, that alone wouldn’t suffice to bring it down. However, we also have some issues in formatting…and then there is the elephant in the room.

You see, the class endeavors to treat bloodline powers like spells. As though they could all be enhanced like spells. That is clearly not the case. While basic metamagic and condition-addition etc. work well enough, bloodline powers can cover a VERY WIDE range of different tricks. And many of these tricks and how they interact with metamagic get really, really wonky. Really fast. As in: I wouldn’t ever want to decide the precise effects while behind the screen. Now, there are complex rules-syntax constructs that could have covered them all – I’ve seen it done, more than once. Heck, I’ve done it myself. However, this pdf leaves you alone with this HUGE problem.

Okay, so you get a damaging aura. How do conditions apply? Hmm? How do natural weapons and the feats interact? How do action economy changes work? A significant component, perhaps THE most significant component of the class, doesn’t work and needs copious amounts of GM fiat. That’s no good.

There is also the aspect of the homunculus. It feels tacked on. As a pet, it is an afterthought at best compared to other classes. It’s gained VERY late and doesn’t really bring that much to the table – why not have a pet from level 1 or 4 onwards? Or, you know, none and instead more customization? The archetype is basically non-functional as written.

Damn, this breaks my heart. This pdf sports several red flags that tell me that something went wrong in a revision, that it wasn’t playtested sufficiently or that it was rushed. Gaining abilities that may quite frankly be useless for a whole level, for example. Or the hand-waved bloodline power/metamagic-interaction. The whole class doesn’t feel like a final release, but like a draft. You know, the thing you send to the publisher for feedback, then expand and clean up into the finished product. It’s sad, really, for I can see the 5-star potential that the class undoubtedly has. As written, though, I cannot recommend it. My final verdict will clock in at 2.5 stars, rounded down. I hope for a revision.