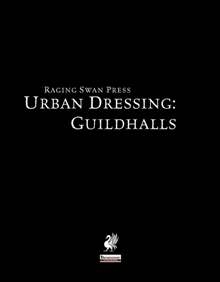 This installment of the Urban Dressing-series is 15 pages long, 1 page front cover, 1 page advertisement, 2 pages of editorial, 1 page ToC/foreword, 1 page SRD and 1 page back cover, leaving us with 8 pages of content, so let’s take a look!

As befitting of a guild, we first kick off this pdf with a table to actually determine the type of guild – a total of 16 different ones are provided and oh boy – from the standard fare of merchant’s/craft-guilds (synergy with UD: Traders& Craftsmen and UD: Market Stalls, btw.), thieves and assassin’s guilds, we also get Frith Guilds (elected upstanding citizens who pass judgment on criminals), bardic guilds and even secret societies/fraternities/sororities – nice selection.

The attentive reader may have noticed the increased page-count, which is due to a glorious one-page b/w-artwork on the following page, just before we dive into a short d1o-table (which erroneously is called d20 though it has exactly 10 entries) of guildhalls that organizes them by quality and available amenities.  Each of the three qualities (makeshift, moderate, prosperous) gets its own d20-table of random rooms to generate them on the fly and make them stick out. Nice! The d6-table for amenities is also nice (though it’s also headed erroneously d20), though honestly – I would have loved more. Seeing how prosperous guildhalls can have 5 or more amenities, more variation would not only have been prudent, but rather mandatory.

Now every organization requires some form of initiation and from paying copper to killing an existing member, 20 are provided alongside 20 sample motivations for the guild as such. We also get 20 rumors and 10 nice, fluff-only write-ups of sample NPCs – one of which essentially could be your world’s representation of V.

Editing and formatting are very good, though there are the two minor dice-type confusion glitches in here. Layout adheres to RSP’s two-column b/w-standard and the pdf comes fully bookmarked and in two versions, one optimized for screen-use and one to be printed out.

Author Brian Liberge has created a cool generator here – but one that could use some expansion. First of all, the amenities-table is a bit on the short side for my tastes, but that is only one of my gripes with this pdf: We have an excellent supplement for downtime rules predestined for guilds – Ultimate Campaign. It wouldn’t have been hard to include a table of available teams by guild-type, or the costs for the randomly generated rooms (see rooms in Ultimate Campaign) in the respective tables – in fact, that would have helped DMs immensely:

The Aspis Consortium moves into town and wants to build a new guild hall? There you go, a couple of quick rolls and you have all rooms and associated costs at the ready and can add them up. Had this been included, this may very well have been the very best Dressing-installment so far. As provided, it remains firmly entrenched on the fluff-only-side and misses this great opportunity. Hence, my final verdict will clock in at 3 stars – useful, but only for the fluffier bits of guild-design.

You can get this supplement here on OBS and here on d20pfsrd.com’s store!