EZG reviews Rule of Law I: Clash of Constructs

Rule of Law I: Clash of Constructs 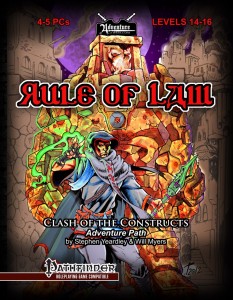 This module is a whopping 143 pages long, 1 page front cover, 2 pages of advertisement, 2 pages of editorial, 2 pages of  ToC, 1 page SRD, leaving us with a massive 135 pages of content – so let’s take a look, shall we?

This being an adventure-review, the following contains SPOILERS. Potential player should jump to the conclusion. All right, still here?

As you can glean from diverse rants I’ve written throughout my illustrious reviewing “career” so far, I’m a stickler for immersions and, among others, non-lethal damage: PCs should not get away with unsanctioned killings within a city’s boundaries, especially not if they’re supposed to uphold the law.  Well, it almost seems like this module was made to address a similar concern: Set in the Arcane Quarter  of Mohkba, the capital city of the Klavek kingdom (the vast human empire of AaW’s world), the PCs are, via a plethora of hooks, in for a truly uncommon assignment. Some years ago, a naive wizard named Kosto Hajika was conned out of his tone golem by the noble house Loihtia: Feigning an attack by the golem, the house has managed to use the law of the capital to claim control over the golem for the transgression and has repeated similar cons over the years, gaining powerful tools indeed.

Now, hardened by years of adventuring, Kosto is back with a new stone golem, and while he was naive once, years of adventuring have bred a significant shrewdness and he’s here to claim what was his. Going through the official channels and contacting other wizards (perhaps allies of the PCs or even one of them!), he has gathered testimonials that qualify for “Riitava Epaily” – sufficient suspicion and proceeds from court to gather evidence in the house of Loihtia, guarded by clerics of the law – and potentially the PCs.

In the meanwhile, influential and crown-loyal Loihita has had spells go off and is forewarned: Much like in e.g. the Þing of old folklore, the law requires to be backed by sufficient force in order to be upheld and thus, the ordered search for information is limited: Kosto and his allies only have one hour to gather proof of house Loihita’s deviousness – without killing anyone, of course – sub-dual damage (or at least healing foes) is of tantamount importance, whereas destroying constructs, of course, is viable – if something that may be followed up with repercussions. And this is where the module starts becoming something different, something seldom, if ever seen: Variable. and excessively so. If the list if items required to find certain clues etc. is no hint by now, the mansion per se is excessively guarded by magic: Illusions and traps and a vast amount of details make sure that the PCs will have a lot on their hands when exploring the mansion – even beyond its significant gaurdians. In order to perceive certain hints and pieces of evidence, magical tattoos need to be acquired and between excessively detailed libraries, 3 new balanced spells, chock-full storage rooms full of potions and a subtle puzzle (that is both clever and simple once the PCs have realized how it works), there is a LOT going on here. Have I mentioned that without smart actions, the PCs are looking at a DC 100 check to find evidence in one locale? Yes, they better know what they’re doing – or should prepare to expend A LOT of resources to find what they are looking for…

Have I mentioned the rather well-hidden sub-basement or the outsider guardians and alignment-themed rooms? I guess I haven’t, but the PCs will have all hands full – no matter which side they choose.

What? Yep. This may be a good high-level investigation (something exceedingly rare indeed), but that’s not its only selling point: Instead, it allows you to pick sides. Just as the PCs might wish to conduct the investigation, so may they be allies of house Loihtia! Whereas the attackers have golems at their beck and call, so do the defenders a variety of different creatures – and have  a similar goal: Prevent the intruders from gleaning the truth! Defenders may place traps and creatures throughout the house – and actually get a completely different playing experience as well as their own chapter – essentially, the house is depicted in two versions, one for the attackers and one for the defenders, with this being thus essentially two modules in one.  Also, defending the compound versus a high-level mage, a couple of golems and an NPC-party may be quite a challenge and a welcome change of pace – oh, and of course, non-lethal damage should also be used. After all, killing those pesky investigators could result in ugly stains on the floor.

As you can probably glean from this rather innovative set-up, this module could easily be run as one epic convention-module, where two competing teams of PCs meet each other in a clash of brains and brawn – which is one way to make this work. Another interesting option the special structure of this module allows and which I feel obliged to mention, would be the following: If your PCs have a group of rivals (perhaps from paizo’s guide, Coliseum Morpheuon or some other resource), this might make for a cool change of pace: Get the character sheets ready and hand out the rivals, sans comment, to the players and make them devise the defenses. Cloak the attackers in illusions (to offer anonymity – should be within the power of the court) and have them fight the law enforcers – only to reveal after the module that they’ve been fighting their own PCs! Also a great way to use party tactics against them for once. Mind you, that is just ONE of the possible ideas this scenario spawned in my mind.

The pdf also comes with 6 player-friendly maps of the mansion’s different floors, which while serviceable, are not as mind-boggling as most AaW-maps, but oh well.

Editing and formatting are top-notch – I noticed only a scarce few minor glitches and they were universally ones that could be easily ignored. Layout is BEAUTIFUL – with a gray-background reminiscent of marble and copper  lines with serpentine designs, the two-column layout serves to evoke a distinct visual identity that sets the module (and the series) apart. The full-color artworks, while partially stock, also feature original pieces which I haven’t seen before and is serviceable.

The pdf comes fully bookmarked for your convenience.

Oh boy. Stephen Yeardley and Will Myers have created quite a complex module that is innovative to say the least  -where most PvP-scenarios are barebone battles, this one, when used in conjunction with e.g. Conflict, makes for a great STORY-relevant backdrop for such a conflict. Better yet, the module manages to do this without neglecting regular playing experiences. And it offers the freedom to choose the side. And unique conditions to claim victory – as well as fodder for the brain and the REQUIREMENT for the PCs to use all their nifty high-level tools in order to successfully complete their investigation in the extremely narrow time-frame. High-level investigations are exceedingly hard to do – and this one manages to pull it off. Add to that the two paths, options for convention play, puzzles, unique story-angle and we have one superb example of the art of adventure-craft. And the best is: This is only Part I! And yes, unlike many parts of larger arcs, this one can EASILY stand on its own and does not require sequels.

But while we’re talking about other modules: Do you know which module this will replace for me? The disappointing finale of the 0onegames’ otherwise superb urban investigation AP “Road to Revolution” – and if you’ve read my reviews of that one, you know how much I adore it. With some cosmetic reskins, this fits PERFECTLY into the finale and it and its sequels may be THE way to expand said AP to 20th level.

Steeped in magic, taking the peculiarities of high level gaming into account and offering something for both brains and brawns, this module is one definite winner and most certainly an excellent start for the arc that has me clamoring for more. This module sets the bar of what to expect from its sequels high indeed – at 5 stars + seal of approval.

You can get this fine high-level module here on OBS!