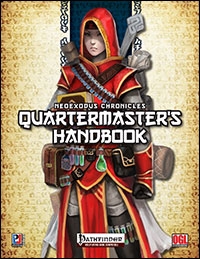 As an equipment book, we kick off with the section on mundane equipment and honestly, many of them had me wonder why the items had not been covered before – take for example the two versions of ball and chain we get in here or the tracing paper. Among the items, we also get some anachronisms like razor wire, which, while personally I like the idea, will probably not fit in with every setting. The Field Medic Kit deserves special mention, as it allows for the non-magical removal of a variety of minor negative conditions – nice if you’re like me and want to keep a slightly tighter lid than usual on magical healing. That being said, there’s also an item I’d consider problematic in the Burglar’s Bane-powder. By adding water, it emits a rosy glow, denoting those that have tried stealing items treated with it. In the NeoExodus-setting, the powder and its solvent are exclusively available to the Jannissaries, which limits it, but the fact that neither perception DC to notice it, nor easy way to get rid of it (universal solvents do the trick – not helping…) are provided mean that it is VERY powerful and should be handled with care by respective DMs. Speaking of NeoExodus-specific items – Dalreans (the plant-PC-race of the setting) get a type of rope that may regrow after being cut. Nice idea and easily adaptable to one of the multitude of plant-races out there!

Among the general adventuring gear items provided, we get tinctures to get rid of parasites, garbs that help versus pollen (I’d need those irl…), crystals specifically created to torment the crystalline Cyneans, lenses made to burn paper/temporarily blind foes, fungi that consume corpses, welding grenades to destroy animate and inanimate objects (but weirdly doesn’t ignore hardness/golem DR), hand and leg-prosthetics, scent-bane, grappling hooks and waterproof tindertwigs and just a few of the items in here. Not all of them are awesome or new, though, as e.g. the oommphteenth aspergillum, barbed caltrop or items like traveling guides and five-copper novels may work as intended, but not necessarily elicit any form of excitement.

For the less scrupulous and shady characters, 23 new poisons allow them to add anticoagulants to their attacks or use a wide array of deadly poisons to wreck more direct havoc. It should be noted, that among the mixtures, there is one that has death as a secondary effect – not a fan of that. What I’m also not a fan of is the fact that every secondary effect, when applicable, suffers from a formatting glitch and has the “secondary” not in bold. There also are multiple minor glitches beyond that, with the final poison for example having its gp-value listed instead of the number of saves it takes to cure it.

The following chapter deals with alchemical items – from alchemical charges to perfume masks, healing-supplementing brandy, paste that makes blood residue glow etc. There also are pickles that help regaining psionic foci – per se cool – only: In PFRPG, gaining psionic focus no longer requires a concentration check, which renders this item a bad 3.5-anachronims bereft of its intended use. Among the better items, we get oil that bursts aflame on weapons, symbiotes for Dalreans that, while susceptible to cold, allow for bursts of speed, dire versions of coffee, gingko and ginseng extracts, haunt and undead-detecting candles, glass-spheres containing corpses/undead-eating beetles or excrements of beetles that work as a substitute for wood in e.g. desert-regions. A big issue I have with this whole chapter is the fact that we get diddly-squat information on alchemy-DCs to create these items or harvest them – something I’d btw. also consider slightly problematic regarding the alchemical items featured in the first chapter.

We also get 4 new mounts/cargo-transporters that feature walking trees domesticated by the Dalreans, cargo scorpions and also the new war wagon vehicle, rules for chitin shields and a variety of new materials that include petrified wood. Two new traps, both very generic and 19 new spells complete the offering. Among the spells, the clean-cantrip, which gets rid of dirt in a room, is problematic, since it fails to specify what is considered dirt – viscera? Other forms of incriminating evidence? On the cool side, there’s a spell to blind tremorsense, make finely-crafted texts fireproof, call weapons to you or conjure up walls of mithral. Unfortunately, the pdf also reprints the broken 0-level tripwire cantrip from RiP’s 101 0-level spells.

Editing and formatting are quite flawed in this offering – I noticed a significant amount of formatting glitches, editing glitches etc., some of which actually impeded the usability of the content. Layout per se is beautiful and adheres to LPJr Design’s 2-column full-color NeoExodus-standard and the pdf also comes with the slightly more printer-friendly, no less beautiful version. The artworks per se are drop-dead-gorgeous and two have not yet been featured in another NeoExodus-publication…but. But NONE of the artworks has ANY connection whatsoever to the content herein. There’s not a single artwork of a featured item or creature and the artworks, no matter how beautiful they may be, feel disjointed from the content. The pdfs are bookmarked, but don’t feature nested bookmarks, which make the bookmarks very unhandy to use. Additionally, the final 1/3 of them are suddenly in all-caps. Weird.

Damn. I’ve said it on multiple occasions and I’ll say it again – LPJr Design products often feature stellar ideas and these genius ideas can be found within these pages as well. Especially when the magical and uncommon nature of NeoExodus is evoked, the entries drip flavor and offer fascinating windows into this compelling setting, offering insights on cultures and customs heretofore unrealized. And then there are the issues. The missing DCs, the glitches – and worst of all, another major issue: For every brilliant item, there is at least one that has been done before. For every great fluff-description of a poison, we get yet another lame attribute-damage/1-save-way out. Honestly, this pdf feels almost like the authors lost interest halfway through it. After having gathered together a variety of cool ideas, they ran out of steam and just kept adding filler upon filler. On the one hand, several pieces of content are great and ooze iconicity and a sense of wonder – on the other hand, there is MUCH content herein that is almost insultingly unimaginative, bland or has not been thought through regarding its logical conclusions/limits. Add to that content (especially among the poisons) that feels like it has been taken from 3.X as well as 3.Xisms like the psionic focus-glitch and we have a pdf, that in spite of its sparks of brilliance shining through here and there, I can’t unanimously recommend. In the end, this pdf feels like it was rushed, in spite of its long gestation period, and like it has simply lost its way halfway through. Another pass at editing and less filler material would have definitely helped this book in my opinion.

I constantly felt myself thinking “but this one idea there is so good…” when writing this review, but I’ve been comparing this pdf to other equipment books I’ve reviewed and the standard I applied then and, as much as it hurts me, can’t rate this higher than 2.5 stars, rounded down to 2 for the purpose of this platform – I have to maintain fairness to comparable books, after all.  If you’re going for NeoExodus-fluff or simply are willing to ignore the filler material, then this still might be worth a look for you.

Want to take a look yourself? Here you can.