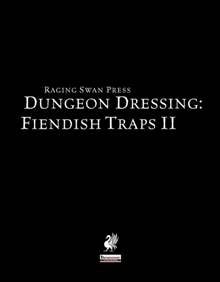 The second offering of this sub-series of Dungeon Dressing, all focused on dire traps, is 14 pages long, 1 page front cover, 1 page advertisement, 2 pages of editorial, 1 page ToC/foreword, 1 page advice on how to read statblocks for novice DMs, 1 page SRD and 1 page back cover, leaving us with6 pages of content, so let’s take a look, shall we?

These traps being VERY nasty, I suggest potential players to skip ahead to the conclusion to avoid SPOILERS.

Still here? All right – the first one is rather NASTY: It features a barghest – so far, so nice. But actually, the meat of the trap sees the soul of a PC swapped with that of the barghest, while four statues animate. The group will not only have to contend with the barghest who tries to smash the focus of the soul jar, but in fact find a way to reverse the swapping – for unlike regular magic jar effects, this one is not only permanent, it prohibits the affected PC from switching bad. So evil it makes me cackle with glee! (Especially should the PCs fail and carry a corpse-consuming barghest amidst themselves…)And yes, advice on how to handle the switch with players is given alongside information to scale this nasty CR 8 up or down by +1 on the El-scale. Oh, have I mentioned the fact that the animated statues are no run-of-the-mill versions either? Triple A+!

Now the second trap is no cakewalk either, but less devious…oh, who am I kidding? A programmed battle via illusions, with round-by-round information that pelts the PCs with flame jets and may have them unintentionally kill themselves with AoE-spells? Yes, please! Per default, that one is CR 5, btw.

At EL 7, the next trap is one for thinkers – all commands spoken within the room become mass suggestions – which wouldn’t be lethal, except for the clockwork servants, which thankfully are at least partially occupied with cleaning up the mess. Still – a hilarious prospect to see PCs shout “charge” and have the wizard jump alongside into the fray…

And then, at CR 7, we get the most complex and awesome trap of them all: Imagine if you will a vast room with 8 columns, each bathed in another unearthly light corresponding to the respective color of prismatic spray. Atop each column lies a pedestal with a pulsating…thing atop. The towers can be toppled, climbed (if you survive the prismatic effect) and at the top, the orb turns out to be…a pulsating heart – one for each column. Obscenely slimy, it wriggles and writhes in the grip of characters – which is bad, since in order to leave the room, the guardians have to be dealt with – 8 undead, vastly strengthened by the weird ritual that made them, must have their hearts returned to them – and the more fall, the stronger they get, upgrading to ghasts and even an advanced mummy! This trap, much like its prismatic colors, is at least 8 types of awesomesauce!

Editing and formatting are top-notch, I didn’t notice any glitches. Layout adheres to RSP’s crisp two-column b/w-standard and the pdf comes fully bookmarked for your convenience as well as in two versions, with one being optimized for screen-use, whereas the other is intended for guys like yours truly who print out their stuff.

David Posener has done it – whereas the first installment of fiendish traps did hit hard, it also missed in one instance – this is different: Not only evoking a dreadful, iconic imagery, it offers nasty traps that are downright evil without being unfair, all while effortlessly breathing old-school spirit in the best possible of ways – final verdict will be unsurprising 5 stars + seal of approval – especially the final trap is absolute GOLD!

You can get the devilish traps here on OBS and here on d20pfsrd.com’s shop!