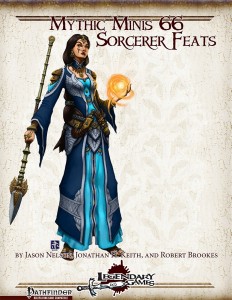 -Create Sanguine Elixir: You do not lose access to a bloodline power when making a sanguine elixir whose minimum level is less than tier; less than 2 x tier when expending mythic power. Imbibers may also delay the onset of the elixir’s effects by tier rounds; the drinker’s effective level would be your sorceror level or HD + 1/2 tier, whichever is lower. Damn cool one!

-Destructive Dispel: +1/2 tier to DC versus the stun; non-mythic creatures extend the stun/sickened duration to 1/2 tier rounds. When using an area dispel, expend mythic power stagger and sicken targets until your next turn, with fort to negate for mythic creatures, partially negates for non-mythic foes. Nice!

-Dispel Synergy: Penalty of the opponent extends to all spells, not just your own, for 1/2 mythic tier rounds.

-Evolved Familiar: Adds either 2 1-point or a 2-point evolution. Solid, though I think the evolved familiars should lose the evolutions upon leaving your service.

-Spell Specialization: Add the communal, greater, lesser, mass versions of the spell or even alternate versions designated by Roman numerals to your list of spells known. Adding metamagic to the specialized spell does not increase the casting duration. Use mythic power to cast the mythic or mythic augmented versions of the spell, at tier-2 for the purpose of qualifying for augments. Mechanically interesting tie-in with the tier.

-Greater Spell Specialization: Cast spontaneously the communal, greater, lesser, mass versions of the spell or even alternate versions designated by Roman numerals. Adding metamagic to the specialized spell does not increase the casting duration. Mythic Spell Focus allows you to change your specialized spell to one of the same school via a long meditation and the expenditure of mythic power. Damn cool – this not only makes the concept viable, but it also makes the character more flexible.

-Sorcerous Bloodstrike: +1/2 mythic tier uses per day; also activate it whenever you reduce a creature to 0 or less HP with a spell/spell-like/supernatural abilities. Additionally, 1/day, regain 1 mythic power when defeating a mythic foe via a spell, but only if the target’s tier is at least 1/2 yours.

-Sorcerous Strike: Add a mythic power-powered effect as a free action when delivering bloodline powers through an unarmed strike. The ability may only have a swift action or less to activate.

Jason Nelson, Jonathan H. Keith, Robert Brookes – gentlemen, this one is fine indeed: With several new tricks and combos facilitated by these feats and several interesting mechanical design-decisions, this is a great example for what the series can do with feats. My final verdict will hence clock in at 5 stars + seal of approval.