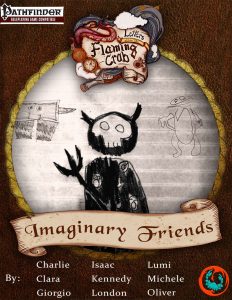 The, for now, final installment of the amazing „Letters from the Flaming Crab“-series clocks in at 25 pages, 1 page front cover, 1 page editorial, 3 pages of SRD, leaving us with 20 pages of content, so let’s take a look!

The pdf, as always, begins with a nice in-character narrative of the exploits of the planes/world-hopping vessel that grants the series the in-prose name, as well as a brief commentary by the faithful scribe J Gray, who transcribes these letters. I still consider this framing device charming and hope that it will be retained once/if the series returns.

Anyway, the supplement’s base framework and idea is pretty cool: We have kids describing imaginary friends, which are then codified as proper entities. Rules-wise, the imaginary friends can be player-relevant, with a feat allowing you to take imaginary friends as familiars in a variant upgrade feat, with minimum level range spanning 7th to 11th level – yes, these are not exactly weak. The second feat, Wonder nets you one class skill chosen from a list of 4, 1/day see invisibility as a SP and +2 to Will-saves versus illusions, but also imposes a -1 penalty to saves vs. enchantment spells and effects.

So, this is one way to get in on the mechanics herein; the imaginary friends gained are built on a NB CR 2 base form. They defy detection and their presence bestows a bonus to saves versus fear effects to their ward – the ward, obviously, being the entity the imaginary friend guards. Unique: The younger the kid, the more potent the friend can be. Depending on the highest unaugmented/buffed attribute of the ward, they also gain a specific ability suite – as a minor nitpick, the pdf does not specify what happens when two attributes are equally high. Imaginary friends can’t truly be slain and rejuvenate a few hours after being vanquished, and they may 1/day manifest physically, but at great risk – when slain while manifested, they may permanently die!

Now, manifested forms can sometimes great deviate from the regular, incorporeal ones, which also means that we get separate stats if applicable (nice), and that these may even have a different CR! So, here is the adorable thing about this pdf: We get artworks either drawn by kids, or emulating kid-drawings at the very least pitch-perfectly for the imaginary friends!

So, what kind of imaginary friends do we get? Well, there would be CR 2 Animay, a sweet, Tiny girl that has limited bardic abilities and carries an oversized pencil as a “weapon” of sorts. Caloon Ready Freddy was a bit heart-rending, as the red creature has a frog-like head and red skin – it is truly good and, as the book notes, quoting, “When daddy died, he became Caloon Ready Freddy…” – I kinda gulped there. With jumpy legs, hypnotic eyes and a tentacle arm that can be turned into a sensory net, the CR 8 creature is inspiring.

Crocodile B, a CR 5 yellow crocodile that doesn’t like being touched due to a nasty scar, can change shapes and may grab targets regardless of size. Deaths, is CR 7, and came from a fear of dying. Creepy-looking and armed with an adamantine pitchfork, the drawing could have been taken from my own notepads when I was young. Rules-wise, this one is slightly less interesting, with a fear aura and suitable SPs, though. Ella is a Cr 3 classic: An under-stuffed, oversized Medium blue elephant, with an aura of friendship.

Lady Cimini, a motherly mini CR 5 imaginary friend, is vulnerable to air, and gets volcano mystery-based ability. She also is a shapeshifter that prefers hamster form – and while in hamster-form, she can’t cast, but she can assume the shape of a mini volcano! Cool! Magicus is slightly more conservative in rules, as the CN CR 4 floating ghost-like entity in tuxedo and top hat is primarily defined by spellcasting. Mister Bora, at CR 5, wields a massive sword of air and may assume panther form and use abilities in conjunction with this form. Rules-wise, this imaginary friend employs kineticist options, making the character feel different from many comparable creatures. Nice job.

Pat’chin (CR 4) is great regarding the imaginative potential the creature shows: A smiling, benevolent spider-pumpkin-looking thing with arms and a warm smile, capable of carrying immense loads. The pistol squidshark (CR 3) is a tiny shark’s body with a squid’s tentacles and head – they can only jet when moving backward, fly and swim, get the ink cloud – and the ward may grab them and use them as a nonlethal weapon! That is amazing! Damn, as someone who loves squid and octopodes, I wished I had one of these…

Secorit, a rather shy friend, carries a pink, heart-shaped bottle with liquid inside, and sports an aura of honestly. In combat, this CR 5 imaginary friend may use Diplomacy to buff versus foes. Minor nitpick: The rules here are not perfect, assuming (or at least looking like it) an opposed roll, which is not how this works in PFRPG. Shaper is a robot with a friendly face and triangular pieces stacked to form arms of sort , which can btw. be fired! Spotty reminded me of my own two imaginary friend when I was 3 – it’s a CR 3 Dalmatian, only 6 feet long, with spots that oscillate like the rainbow. For me, it was a spotted stallion, but yeah – I can relate. The spots change color, depending on Spotty’s mood, and spotty actually has a calming touch.

Trobot Espenzale, at CR 4, is a dancing robot whose arms extend and contract, represented in the SPs this fellow has, as well as the ability to become quicker. Waterwave, at CR 4, can short-range quasi-teleport and fire concussive blasts. Finally, there’d be Wobinar, swirling light manifesting in a chaotic, hovering mass – easily the most abstract of the friends, an interesting, since kids don’t often gravitate to abstract concepts: Composed of living light, this one has a really interesting angle, with color spray touch. Yes, CLs and DCs are properly noted!

Editing and formatting are very good on a formal and rules-language level – I noticed no grievous snafus. Layout adheres to the relatively printer-friendly 2-column full-color standard of the series, and the pdf comes fully bookmarked for your convenience. Artworks, as noted, are kid’s drawings, and I really like this here – they emphasize the theme rather well.

The creative minds and sense of innocent wonder of the kids that contributed these friends, Charlie, Clara, Giorgio, Isaac, Kennedy, London, Lumi, Michele, and Oliver, are to be applauded – I bet few kids ever got a writing credit this soon! Anyways, developer J Gray and publisher Alex Shanks-Abel deliver a wonderful little tome that really oozes joy and warm-heartedness. It’s not something most adults could have come up with. I know I couldn’t have.

You see, I can do exciting, epic, dark, horrific, etc. – I’m a pretty adept and versatile designer and GM…but I can’t, for the life of me, do innocent wonder. Perhaps it’s all the cynicism of the age, perhaps it’s me…but true wonder is hard to convey, to replicate, to emulate. This pdf does manage to do just that. The material herein is wholesome, heartwarming, and a pleasure to read. Now, not all of the imaginary friends herein are necessarily, from a pure design-perspective, genius, but they had to conform to the visions of the authors, i.e. the kids…and, as a whole, they do so admirably.

As a whole, I thoroughly enjoyed this book – particularly in conjunction with Everyman Gaming’s excellent Childhood Adventures toolkit, it can make for an inspiring little offering and add some serious fun to a campaign featuring or for, children. As an aside: I could see e.g. a storyline centering on adult PCs researching missing imaginary friends as a unique and rewarding storyline to pursue.

As far as rating is concerned, my final verdict will clock in at 4.5 stars, rounded up for the purpose of this platform. This pdf may not reinvent the wheel, but it is a great little supplement to read once you’re tired of darkness, grit, etc.

You can get this heart-warming, inspiring file here on OBS!