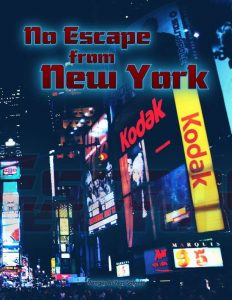 We begin with a page of advice on how to structure a CDS game and/or how to run this. The pdf does include conversion notes for traditional ACs and attack bonuses, making this more hackable than it would otherwise be. The pdf does include 3 tables that let you generate a dark secret for an ally, 12 prior events and a means to include a variety of nicknames to the character.

The scenario does begin on the standard CDS-homeworld Thule, with the PCs finding a hunk of scrap and a laser-toting skydrone – and a portal that brings the PCs to New York city – not any New York, mind you, but to a place that amounts to a retro-apocalypse, 80s style – a post-bomb, prior clean-up version reminiscent of Snake Plisskin’s adventures, but with a healthy infusion of the weird. So yes, if you belong to the folks who enjoyed A-, B- and C-movies of that genre, you’ll be in for a nostalgia-marathon. Similarly, if pop-culture references and the like annoy you, then, surprise, this may not be for you.

Now, this New York is dangerous – and it is perpetually shrouded in neon-based twilight, courtesy of the cataclysm and yes, you may be subject to neon light allergy if you’re unlucky. 6 sample gangs. The themes and tropes are all represented: A robotic cabbie, a femme fatale (dubbed Hard Candy…which reminds me of a rather grisly torture-porn movie) and subterranean travel with 6 sample events, all included. Reptile aliens (out-of-towners), sub-human cannibals and a d8-table of sample prostitutes help generate the grimy, desolate feel of the post-apocalyptic metropolis. Bat-men riding giant bats and Steak-Sauce Sinatra, the big boss of the town, also come with full stats. or become the hired killers of the vampire prince of the city.

A little chart for randomly-generated opinions of dudes on the street can be found and the PCs may eat hot-dogs at Old Snake’s, meet Blade-reference vampires in trenchcoats, receive an invitation from slasher-mimes, witness demon-zombies erupting from one of the worst movies of all time. Seedy bars and sudden eruptions of Lovecraftiana and yes, a crimson dragon, complement these sketches.

The pdf concludes with 3 new spells: Power Word: Anal Violation by Plague of Rats is just as puerile as you’d think it’d be. It’s also very potent for second level and pretty opaque in how it’s supposed to work – conversion to more rules-conscious OSR-games will be a mess here. Right from the Joker’s arsenal, we have a homage on the one German song probably 80% of Americans know by hard – 99 Crimson Balloons generates the eponymous balloons, makes them float up and then erupt, dousing those below in demonic blood. Those doused take on demonic characteristics, gaining an additional attack and killing those nearby. The spell has a lot of issues: It does not specify whether the affected retain control over whom they attack; the spell specifies no range for the blood either. Reverse Curse lets you either offset a curse or add a minor curse to an object – cool!

Editing and formatting are very good, I noticed no serious hiccups. Layout adheres to a relatively printer-friendly two-column b/w-standard and the pdf sports a lot really nice b/w-full-page artworks, all original! The pdf has no bookmarks, which constitutes a minor comfort-detriment.

Venger As’Nas Satanis’ take on a retro-post-apocalyptic NYC is glorious if you’re looking for a trip down nostalgia lane. This is a gleeful, unrepentant, somewhat sleazy stroll down memory lane that is amazing if you’re inclined for the like. The references of classic tropes and twists on them are fun and based on a true appreciation of the source material, an honest, conscious appreciation of it. If you share it, this will be amazing for you. That being said, one might also criticize this pdf – not for its adherence to tropes and its twists on them, but for the presentation and lack of structure this pdf sports. I know next to nothing about this alternate New York City’s power-structures, layout or the like – this very much represents more of a toolkit than an adventure, with hooks left and right, yes – but they remain just that. The individual components never really come together as a concise and holistic whole, never explain how this city’s dystopia still, even remotely, works.

In short, to me, this worked for as long as I turned off my brain and didn’t start questioning everything; as soon as I did, I felt like I had seen the man behind the curtain. In short, as much as the individual hooks are cool, as much as each aspect of this book is pretty neat, the totality does not really offer that much for me – this is an instance, where the whole is not greater than the sum of its parts, unlike in e.g. a similar scenario, Venger’s Revelry in Torth. If the nostalgia and reference don’t do it for you, you may find yourself feeling a similar way about this and be somewhat disappointed by the pdf. As a whole, this is a nice first step, a fun first look at a retro-post-apocalyptic campaign setting, but not more than that. If you’re expecting a fully-fleshed out module or setting, this will not deliver.

How to rate this, then? Well, for me, personally, this didn’t do much. As much as I love these retro-apocalypse movies and references, I lack the capacity for full-blown nostalgia and as such, the main draw of this pdf…is lost on me. For me, personally, this is a 3 star-file – decent, but frankly not that amazing. However, as a reviewer, I have to take into account that many of you will absolutely adore this pdf, courtesy of the nostalgia I don’t really get – hence, my official final verdict will clock in at 3.5 stars…and since I have an in dubio pro reo policy, my final verdict will be rounded up.