The Savage (Alternate Base Class)

The Savage (Alternate Base Class) 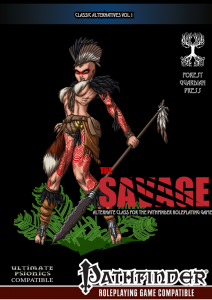 This alternate class clocks in at 17 pages, 1 page front cover, 1 page editorial, 1 page SRD, leaving us with 14 pages of content, so let’s take a look, shall we?

No the terminology might be considered a problem from the get-go – the word “Savage” constitutes more than a direct opposition to “civilized men.” Hence, the 1st page is devoted to an explanation that acknowledges that this pdf is not based on any real life cultures -I applaud this maturity. If you’re interested in the genesis of the development and meanings associated with this particular dichotomy, feel free to drop me a line.

The Savage class is an alternate class for both barbarian and monk, meaning that multiclassing into either is prohibited. The class receives d12, 6+Int skills per level, proficiency with axes and generally, stone age-style weapons – a comprehensive guideline for savage weapons and armors would be included here, allowing for further, campaign world specific customizations of proficiencies. When wearing medium or heavy armor, the savage loses both fast movement, furious blows and the AC-bonus. It should also be noted that the savage can add two skills of their choice as tribal lore to their array of class skills.

The class also receives full BAB-progression, good fort and ref-saves, an AC (and CMD!)-bonus scaling up to +5 and increased movement rate scaling up to +60 ft. What are furious blows? Well, at first level, the savage can execute +1 attack, imposing a -2 penalty to all attacks. These scale upwards at 8th and 15th level and these attacks may only be executed with savage weapons. Interestingly, the ability manages to get two-weapon fighting rules-interaction right – there is none this time around and this is good in this case – the ability is rather powerful, though thankfully, certain massive weapons have an additional penalty applied.

Now the savage may also enter a primal state as a full-round action that provokes AoOs. Said state can be maintained up to 24 hours and provides +2 to Intimidate, Handle Animals and Sense Motive skill checks and Improved Unarmed Strike as a feat, which also works for the purposes of feat-prerequisites – nice catch! Additionally, the state can be expended to power abilities and feats, somewhat akin to how psionic foci work – the lists of feats/powers contain the necessary information for which needs the expenditure. Instead of a rage, savages may enter so-called rampages for up to 4+con-mod rounds per day, +2 per additional class level. While in a rampage, savages receive +2 to will-saves, acrobatics, climb and swim-checks. Now rampage also offers temporary hit points equal to foe’s HD for every enemy reduced to 0 hit points or below – surprisingly, the ability comes absolutely kitten-proof – no way to abuse this! Gloriously done!

Now the next thing would be a bit complex, so bear with me – savages of 2nd level (and every even level thereafter) may select a monk’s bonus feat or a barbarian rage power as a savage power, though the latter only work while rampaging. Evasion and improved evasion may be chosen as well, the latter thankfully with a level-cap. A massive list of rage powers from core, APG and UC are provided and yes, the pdf is smart enough to prevent combinations of different totem rage powers. The class also receives uncanny dodge at 2nd level (improved at 5th) and a scaling danger sense that translates to a bonus to initiative and a bonus to AC when being attacked by ranged weapons in the surprise round – nice spider-sense! Savages also receive scaling bonuses versus diseases and poisons that turn to immunity at very high levels.

Also rather nice – savages may learn to receive bonuses versus particular spell schools (including psionic ones!), but this is not where we stop:

At 4th level, the savage receives a pool of feral points equal to 1/2 class level +con-mod. As long as the pool contains at least 1 point, rampaging savages may have weapons count as magic for DR-purposes and at 9th level, also as cold iron/silver. When in primal state, a savage may expend 1 point from the feral pool as a swift action to increase movement by 20 ft for 1 round, +2 natural AC for 1 round, +20 (!!!) acrobatics for jumping purposes only or +1 to critical confirmation rolls for con-mod rounds. Additionally, 4th level savages may expend feral points to quickly heal non-lethal damage or diminish the duration of some negative conditions.

At 7th level, savages heal even without resting at an increased natural rate and increases the amount of conditions they can diminish. Where math became complex for me would be the option to expend 2 feral points for +1 round of rampage – think of all the combinations possible…

At 11th level, savages receive ferocity and the truly high-level savages may enter blood rages. The capstone makes the savage tougher and makes criting them very hard – but this is not where we stop; This pdf also provides quite a few archetypes, first of which would be the Dread Savage. Instead of entering a primal state, these guys may enter a kind of death-like trance that has them count as undead, but still allows them to be healed by positive energy – provided they succeed a concentration-check. Their rampage allows them to render targets hit by their wight strikes shaken, allowing the dread savage to expend rounds of rage for additional slam attacks (no synergy with furious blows, though) and the archetype also receives a debuff aura , increased saves versus level-drain etc. The dread pool the archetype has, also allows for wholly unique benefits and 3 new rage powers complement the package.

The second archetype would be the Noble Savage – noble savages receive an unleashed presence in lieu of rampaging, use their cha-mod to determine their pool and may expend said points to grant themselves cha-mod as bonus to saves for 1 round. It should be mentioned that the presence has the bonuses applied to completely social skills and that it’s governed by cha as well. Almost perfect negotiators, they can grant themselves massive bonuses to bluff, but thankfully not for feinting purposes.

Next up would be a special treat with the phrenic savage alternate class, a psionic alternative to the base savage – these guys receive changed save-progressions, a limited array of power points (scaling from 1 to 70), governed by wisdom. The phrenic savage also receives unlocked talent and a pretty limited array of psionic tricks thus, later learning to use wis to govern it instead of cha. Phrenic savages may expend power points to temporarily grant them rapid metabolism and similar feats, including a kind of DR versus ability score reduction (somewhat unfortunately named “ability”, making it slightly more opaque than it should be). The improved fiery discorporation capstone at 20th level is also rather nice, though the phrenic savage pays for the psionic tricks with both the flurry-like trick and the rampages. Still, would have loved the class to mention for what it is an alternate class – I *assume* full multiclassing potential, but I’m pretty sure the class probably ought to have some limit. The 4 psionic feats used by the alternate class and the two psionic powers are provided in here as well.

We also receive a final page of primitive weapons, courtesy of Little Red Goblin Games, ranging from the great macuahuitl to the gunstock club – these are all solid.

Editing and formatting are very good – while, in some instances, wording is slightly less precise than I would have wanted it to be, over all, the pdf manages to handle the complex content rather well. Minor issues like the “st/nd/rd/th” missing behind the numbers in the class level table of the Phrenic Savage can be considered generally cosmetic. The pdf comes with glorious, original full-color pieces of art and the 2-column b/w-standard generally is printer-friendly. The pdf comes fully bookmarked for your convenience.

Morgan Boehringer (lead developer), with Jim Wettstein (and additional content by Keil Hubert and Christos Gurd), just delivers. There’s no way around it, the savage may be the most interesting melee-base-class I’ve seen in quite a while – it is powerful and I was honestly surprised that it fared so well in playtest and turned out to be rather well-balanced. This is honestly the level of awesomeness I would have expected from each and every ACG-class. The savage has more options than either monk or barbarian, without invalidating the parent classes. The additional content just represents the icing on the cake. The psionic variant class is also solid, though it feels slightly less inspired – mainly because the class does not have that many tricks up its sleeve – the unlocked talent route does not necessarily provide a selection of powers to use, which the pdf seems to imply. Unlocked Talents nets the phrenic savage exactly ONE power, which is prescribed by the pdf. Why not provide at least a slight array of e.g. psychometabolism choices?

The psionic savage is simply not half as interesting and flexible as the base class and thus, would be one of my minor complaints. Another minor issue would be the 19th level of the savage class, which is a dead level. Now are these minor issues? Yes. Is the overall class AWESOME? HECK YEAH! The savage constitutes a damn cool addition to any kind of group, is fluff-wise easily implemented, complex, yet easy to grasp and would be 5 stars + seal of approval were it not for aforementioned minor glitches. With the slight imperfections, which in no way spoil this otherwise damn cool class, I will instead settle “only” for a final verdict of 5 stars. Consider this the monk/barbarian-class the ACG should have delivered, but didn’t.

You can get this damn cool class here on OBS and here on d20pfsrd.com’s shop!